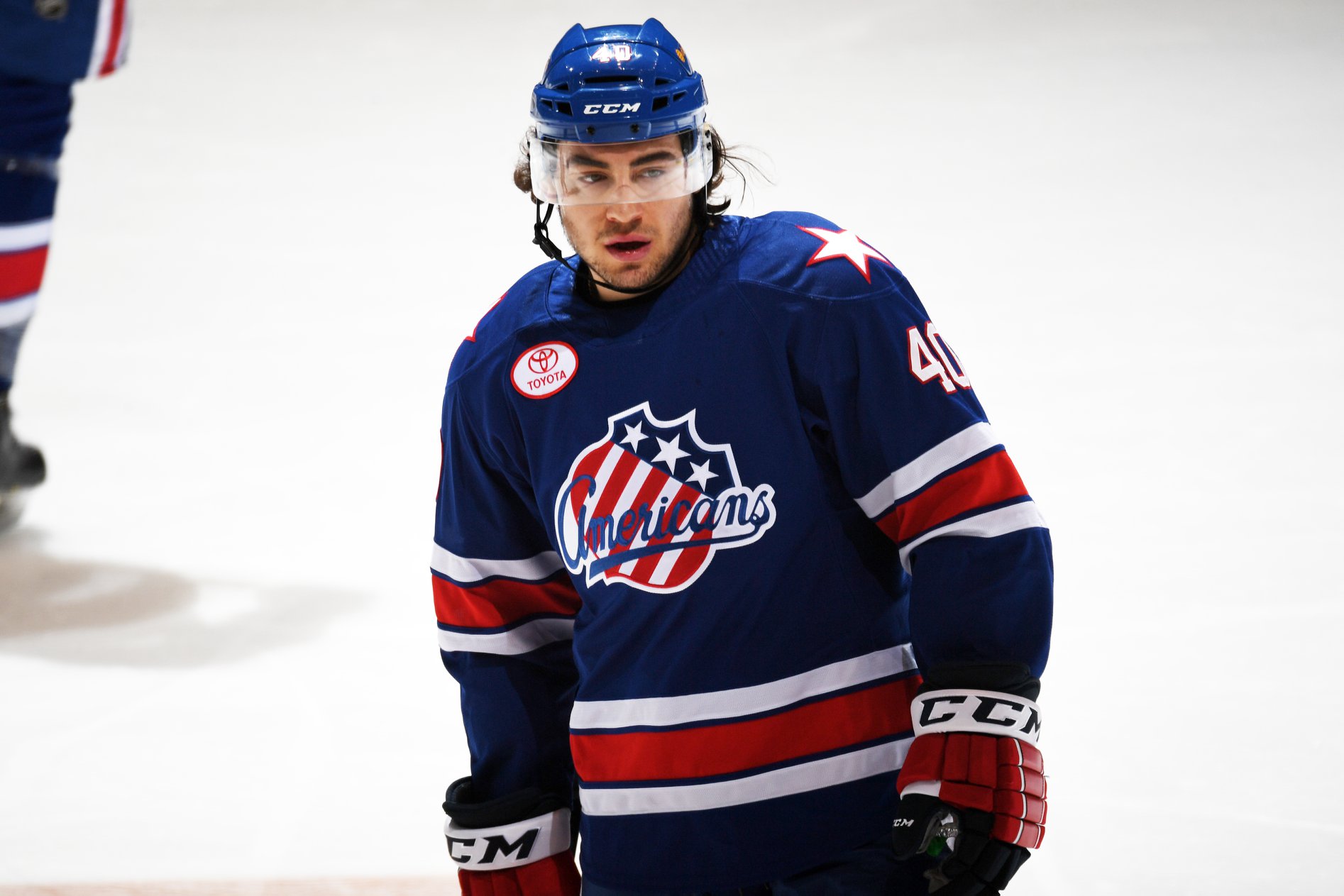 The Rochester Americans (20-7-2-2) are on the road this afternoon in Utica (19-10-2-2) for an early evening game to finish off the 2019 calendar year. It’s a rare Tuesday game and an unusual 5pm start but it’ll give everyone enough time for the game to be played and enjoy the evening. There’s only two points separating the two teams in the standings although the Amerks will still have two games in hand.

Through four games played this season between Rochester and Utica the teams have split the series with two wins each.

After playing the month of November without a regulation loss the Amerks have coughed up four in December. The team is 2-3 in their last five games and 5-4 in their last nine games. Over the weekend the Amerks won a Friday night thrilling 4-3 game scoring two in the third which included the game winner with two seconds left. They traveled to Binghamton and lost 2-0 to one of the only teams in the league that has figured them out. Binghamton is also the team in last place.

Good news is that the team remains in first place and will still be in first place as the calendar switches over to 2020. With the first place finish at the end of the day on December 31 it earned Chris Taylor the coaching honors for the North Division at the 2020 AHL All-Star Classic. An accolade he credits to management, players, and everyone else around him.

Remi Elie is expected to back in the lineup for Rochester today after missing the last 19 games with an upper body injury. The injury was originally day to day and went longer than expected. Elie has been cleared and should be a boost to the lineup. He’s only played in eight games this season and had 6 points (2G+4A).

CJ Smith is expected to play as well after missing the last game and a half due to an illness.

Casey Mittelstadt is still looking for his first goal as an Amerk heading into his sixth game with the team. He was credited with a secondary assist over the weekend which was a shot on net where the rebound bounced out to Lawrence Pilut. In five games he’s a minus-4.

One player the Amerks will be without is Dalton Smith. The reason? He was signed by the Buffalo Sabres and is expected to make his NHL debut tonight against the Tampa Bay Lightning. Ralph Krueger told the Buffalo media this morning, “Thereâ€™s a good chance heâ€™ll be in our lineup today.” Everyone in Rochester is aware of what Dalton Smith can bring to a game.

A key to winning tonight will be in slowing down Comets forward Reid Boucher. He is second in the American League with 39 points and first in goal scoring with 20 through 28 games played. Boucher is also on a 15 game point streak (7G+14A) dating back to November 23.

Here’s some additional copy/paste stats courtesy of the Amerks:

TEAM AND LEAGUE LEADERS
â€¢Â Â  Â Jean-Sebastien Dea leads the Amerks with 21 points and is tied for the team lead with 10 goals in 29 games this season. Dea is coming off a three-game assist streak and has four points (1+3) in his last six games heading into Rochesterâ€™s final game of the calendar year.

DYNAMIC DUO IN THE CREASE
â€¢Â Â  Â Anchored by the elite goaltending tandem of veteran Andrew Hammond and third-year pro Jonas Johansson, the Amerks own the top defense in the league, having allowed only 71 goals through the first 31 games of the season, the fewest in the AHL coming into the week. The duo has also combined for six shutouts and are tied for 10th among all AHL goaltenders with 10 wins each on the season.
â€¢Â Â  Â Hammond (10-5-2) comes into the matchup second among all netminders after notching his fourth shutout of the season on Dec. 14 in a 5-0 win over Laval, a new career-high. In his last 12 games, Hammond boasts a 7-4-1 record with four shutouts, a 1.67 goals-against average and a .946 save percentage. With four shutouts through just 18 games this season, heâ€™s on pace to match the franchise record for most shutouts in a season (8) set by Ryan Miller during the 2004-05 campaign.
â€¢Â Â  Â Having won eight straight appearances, Johansson shows an AHL career-best 10-2-2 record this season. Entering the week, he has the second-best goal-against average in the league (2.00) and is tied for third among all netminders with a .933 save percentage in 15 games. Dating back to Nov. 13, the third-year netminder boasts a perfect 8-0-0 record with two shutouts, a 1.74 goals-against average and a .946 save percentage while allowing just two goals or less in six consecutive starts over that span.

THE BEST OFFENSE IS A GOOD DEFENSE
â€¢Â Â  Â Rochester owns three of the AHLâ€™s top point-producing defensemen in Zach Redmond, Lawrence Pilut and Casey Nelson, all of whom have been mainstays on Rochesterâ€™s blueline this season.
â€¢Â Â  Â The 2019-20 season is just a different chapter in the same story for the 31-year-old Redmond, whoâ€™s averaged nearly a point-per-game through his first 28 games of the season. Redmond is currently tied for 11th in scoring among all defensemen with 20 points and ranks 13th with a team-high 15 assists. Heâ€™s also tied for sixth in the AHL for goals by a defenseman with five.
â€¢Â Â  Â Coming off his third three-point outing of the season on Friday, Pilut has 14 points (3+11) over his last 18 games dating back to Nov. 15 since returning from the Buffalo Sabres. The former SHL Defenseman of the Year has already matched his goal total from last season in four fewer games and is on pace to set a new career-high in points. His 15 assists are tied with Redmond for the most on the team.
â€¢Â Â  Â Nelson shows a team-best plus-16 on-ice rating through 29 games, good for third among all active blueliners and fourth overall in the AHL.