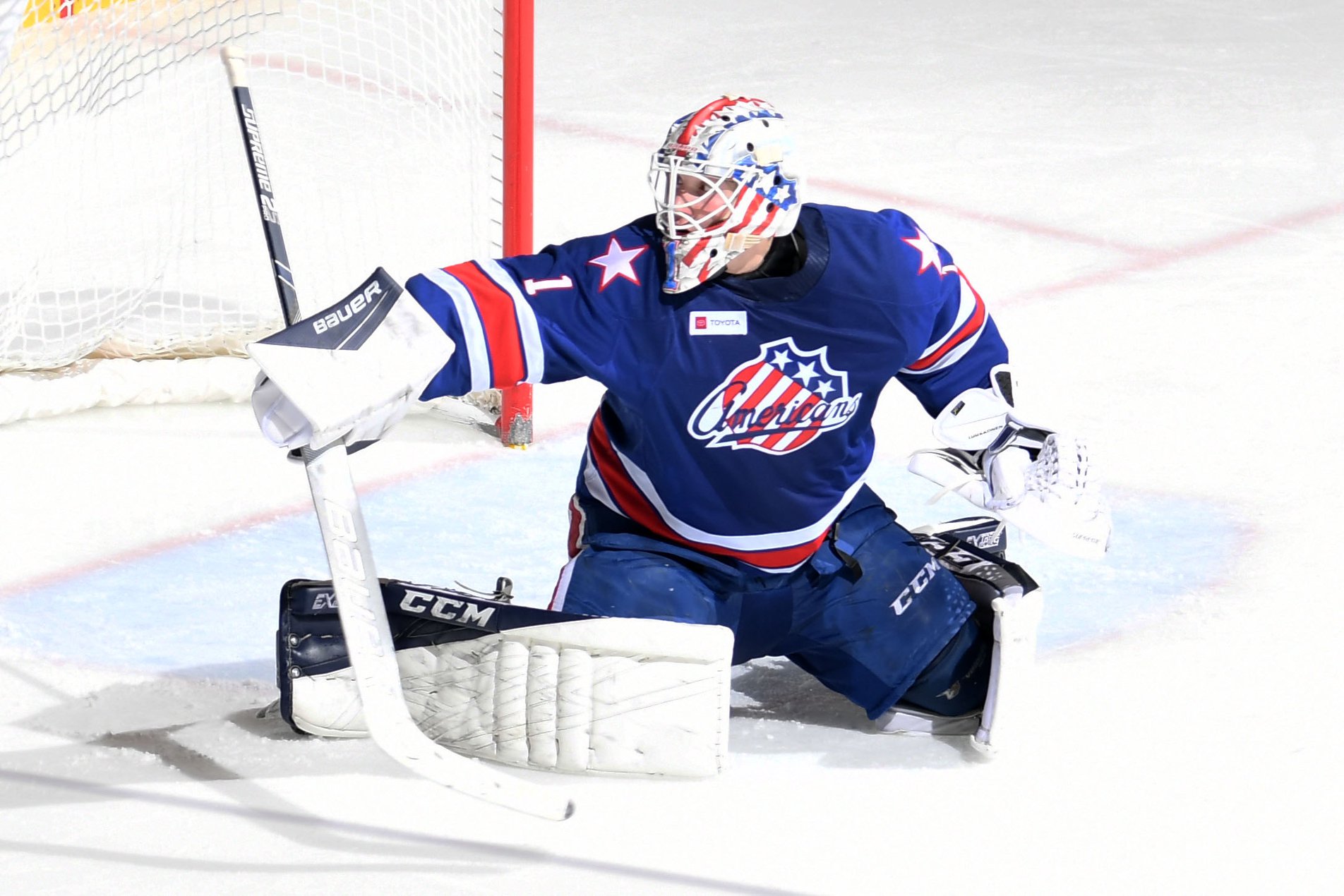 This weekend belonged to rookie goaltender Ukko-Pekka Luukkonen with back to back wins for the Rochester Americans. He was perfect Saturday night in the shootout and then made two massive saves in the last 35 seconds of the game Sunday afternoon to complete the winning weekend.

It wasn’t a perfect weekend but it was a good weekend. Two wins against two different divisional teams to earn four points and move back into second place in the North Division.

“Big wins, big wins,” Taylor Leier said after the game Sunday referring to the overall weekend. “This weekend was awesome. Ukko played great, two wins, happy for him, and it’s just good for the team morale.”

Remi Elie opened the goal scoring Sunday afternoon with what could be considered a fluke goal of sorts just 2:13 into the game. Elie was falling to the ice and as he did he was able to get the puck on his stick and pull of a shot that found the back of the net. Just over eight minutes later Eric Cornel scored his 10th goal of the season setting a career high. Scott Wilson and Sean Malone created the scoring opportunity with their forecheck and gaining control of the puck.

“They did the dirty work,” Cornel said talking about the goal. “I just kinda got lucky with a good bounce and was able to put it in.”

Taylor Leier has had another roller coaster season in and out of the lineup due to injuries but is healthy and settled back into a big role. Leier scored at 1:48 of the second period to give Rochester a comfortable 3-0 lead. Zach Redmond sent a pass to JS Dea down low and he was able to put the puck right on Leier’s stick for the easy tap in.

“Oh yea, JS what a pass,” Leier laughed. “It was great. We had a lot of chances tonight. I felt all three of us could’ve had a few goals. That seems to be a trend the last couple of games so hopefully the three of us stick together and just build on our chemistry together.”

The ‘three of us’ that Leier is referring to is the line of him, Dea, and Rasmus Asplund.

Utica closed the gap with a back hand goal by John Stevens over the glove of Luukkonen in the second period and a tip in front of the net by Nikolay Goldobin at 12:37 of the third period.

It was a one goal game and once there was less than two minutes to play only a matter of time before Utica pulled goalie Michael DiPietro. The opportunity finally arrived with 41 seconds left in regulation and Utica made their way up ice with the extra skater.

Sven Baertschi took the first shot from the left side face off circle and the rebound found it’s way into slot where Kole Lind wound up for a shot. Luukkonen was quick to track the puck and extended his left leg to kick the puck into the corner.

Save of the season and Luukkonen sealed the #Amerks win! pic.twitter.com/Rwce4lSmoF

“Huge, I jumped on the bench,” Leier said when asked about the save. “It was huge, a great save.”

Luukkonen knows the role the save made in the game. When asked about it he said, “The defensemen helped me but as a goalie you have to usually make one or two big saves.”

“Oh yea, I’m sure it went through everybody’s mind that was watching the game,” Chris Taylor said when asked if he thought it was going to be a goal against to force overtime. “To me, that’s a big time goalie. That’s a big time save. Even to make the first one.”

“That was a spectacular save. It didn’t look good there for a second, he came out of nowhere,” Eric Cornel said when asked about the play. “Hopefully we can see more of that from him.”

With back to back weekend games with a quick turnaround (7pm start followed by a 3pm start) the goaltending duties are often split but with recent transactions that plan was up in the air. Andrew Hammond was called up to Buffalo early Saturday which resulted in Michael Houser being called up to Rochester from Cincinnati.

When Luukkonen was asked about playing in back to back games he said, “It’s not the worst situation for you if you’re ready to play and when you feel like you aren’t too tired especially today since we played early. You don’t have too much time to think about the last game whether you won or lost. You have to be ready for the next day so I don’t mind.”

The rookie goalie has had 23 goals scored against him in his seven starts with the Amerks this season with many off shots that a veteran net minder would have stopped. Sunday night was a different game. He appeared calmer, more composed, and more important incredibly confident in net. The back to back starts likely helped him settle into the role.

“I just liked his compsure. The end of the game they had a huge opportunity and he made a big save,” Chris Taylor said. “It kept them from getting a point and us going into overtime there. He’s maturing right before us.”

Chris Taylor wasn’t happy about the fact that Utica had the opportunity they did late in the game. He said, “For us to give up that opportunity we have to be better than that. A lot better if we want to go any further than where we want to go (referring to the post season). Those types of situations can’t happen. The firts shot, not the second. We have to be better.”

Getting back to Luukkonen for a moment, Chris Taylor said,Â “For him, unbvelievelable. Even just his composure after getting up. It just felt like he owned that crease and nothing was getting by him.”

Luukkonen made those saves at the end of the game Sunday and the night before had made two saves for a perfect performance in the shootout against Syracuse.

Recap: Syracuse was Silenced by Mittelstadt