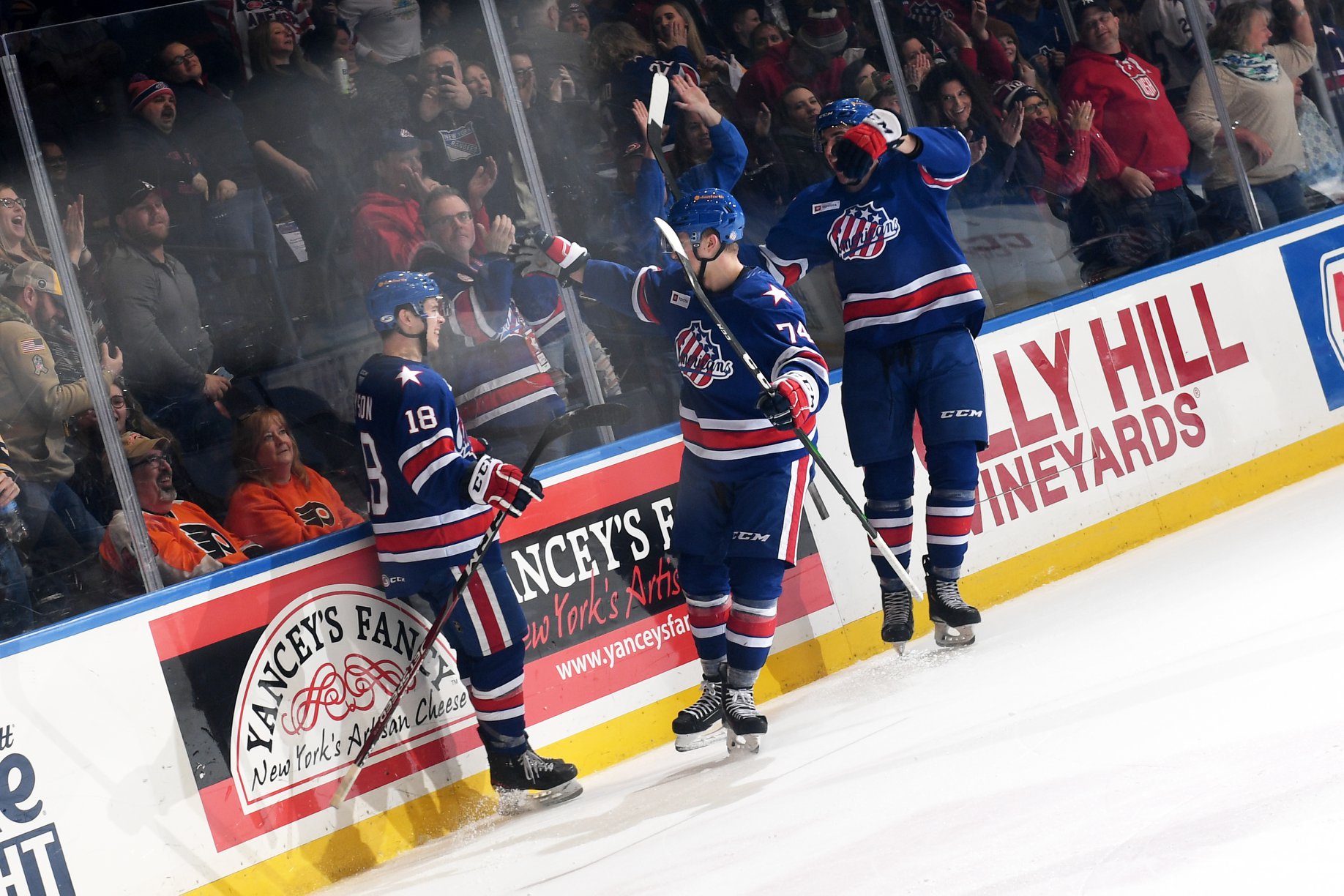 There’s multiple ways to look back on the Rochester Americans overtime win Friday night against Lehigh Valley and not one of them would be wrong. The final outcome was a win without giving up points to a divisional team in the second half of the season.

It was an exciting game with a lot of scoring chances and big saves from both goalies throughout the game.

Even though the final outcome was a win you can say the Amerks blew another shutout lead going into the third period.

You can say the team blew the game when Mikhail Vorobyev of the Phantoms tied the game just 20 seconds after Sean Malone scored the go head goal with 51.1 seconds on the clock in the third period. When you take a 2-1 lead in the final minute you need to close a game out (even after a bad bounce).

You can also look beyond those things and just talk about the exciting goal scored by rookie Jacob Bryson just 35 seconds into overtime as the big highlight to take away.

“I thought we started off really well, I thought Hammond very well for us. Big saves at key times, obviously the five on three,” Chris Taylor said when asked about takeaways from the game. “I thought our defense played really well too containing them. Our first period was really strong, kind of let off a little bit in the second, and I thought the third was better for us.”

CJ Smith scored the first goal of the game with a one timer that snuck past Phantoms goalie Alex Lyon just 3:26 into the game. JS Dea fed a pass through the front of the net to the opposite side where CJ was ready for the shot and he put enough on it to get into the net. The 1-0 lead would last through the start of the third period.

The game belonged to Rochester in the first period with sustained pressure and scoring chances. It was a team effort in driving the play and dictating the pace of the game. The one thing that continues to get away from the team is being able to score on those chances.

“We had a lot of chances in the first again. Obviously we’d like to bury a lot of those. In the second and third period Lyon made big saves. Leier had a couple going down the middle, JS had a couple, we had a couple half breakaways where we just couldn’t put it by him,” Taylor said when asked about the chances. “We have to find ways to get better at that for sure and we’re working on it a lot in practice these days.”

The shutout attempt was lost when Kurtis Gabriel scored just 3:35 into the third period from the slot off a pass from former Amerk Kyle Criscuolo. As Will Borgen and Andrew MacWilliam followed the puck into the corner it allowed Gabriel more space in front and Criscuolo was able to quickly turn and feed him the pass.

When the game is tied the last thing you want to do is gift another team a five on three and that’s what the Amerks did off of a bad line change when they were called for too many men. Zach Redmond was already in the box for an interference call.

The penalty kill was perfect with the star being Andrew Hammond.

“It’s one of those things where that’s a big momentum shift in a game where you feel like if you’re able to bail your team out of that then maybe we can go the other way,” Andrew Hammond said when asked about his big saves in the third period on a penalty kill. “Doesn’t matter if it’s five on four, five on your five, it’s your job to make a save. Sometimes it’s a little harder than others but you do what you can to bail the team out.”

The crowd of 6,196 was into the game and Sean Malone delivered in the final minute. Jacob Bryson carried the puck down into the corner of the offensive zone, sent a pass to Andrew Oglevie who got a piece of the puck but fanned on his shot, and Malone was there to grab the puck to take a stride and beat Alex Lyon glove side.

“It’s an emotional roller coaster when that happens. I was very amped up, fired up,” Sean Malone said about scoring his go ahead goal at the time. “Unfortunately 20 seconds later it ends up in our net. I’m more frustrated about that than happy I am scoring that goal.”

Mugsy with this beaut of a shot that put the Amerks up 2-1 for a very short time. pic.twitter.com/Zz0QM1jESy

And then 20 seconds later the Phantoms scored.

Andy Andreoff put the puck to the front of the net and it went under the blade of Hammonds stick to the opposite side where Mikhail Vorobyev was able to score. After the faceoff the Phantoms came at the Amerks with everything they had and it paid off to earn a point.

Tying goal by Mikhail Vorobyev of the Phantoms with 32 seconds left. pic.twitter.com/u0K1iHrz8Y

After the Wednesday overtime loss the Amerks made sure to finish the game on their first shift in overtime. Rasmus Asplund entered the zone along the boards, dropped it off to Mittelstadt on the blue line who drove the net and a back hand to the front of the net went off a Phantoms player and Jacob Bryson was there to grab the loose puck and win the game.

“It was a nice bounce but I was just kind of there driving the net,” Jacob Bryson said on his game winning overtime goal. “Mittelstadt made a great play getting it over there and I found the loose change there.”

Bryson had the confidence to carry the puck down low on the brief go ahead goal and drove the net to be able to score the overtime winner. He’s been a star on the blue line for the team all season and in the second half he’s become a bigger threat. Skating on a line with Zach Redmond all season has helped him grow in his game and after skating in 51 games without a goal he has goals in two consecutive games.

“We need to just keeping building on the positives,” Andrew Hammond said on what they need to take into Saturdays game. “We’ve had some success lately but for the most part I don’t think we’ve been happy with our 60 minute game. Tonight we had chances to put it away again but it’s just a matter of time now. It’s nothing to really say we’re not doing but a matter of building up to that one game where we put it over the top and let us dictate the game the whole time.”