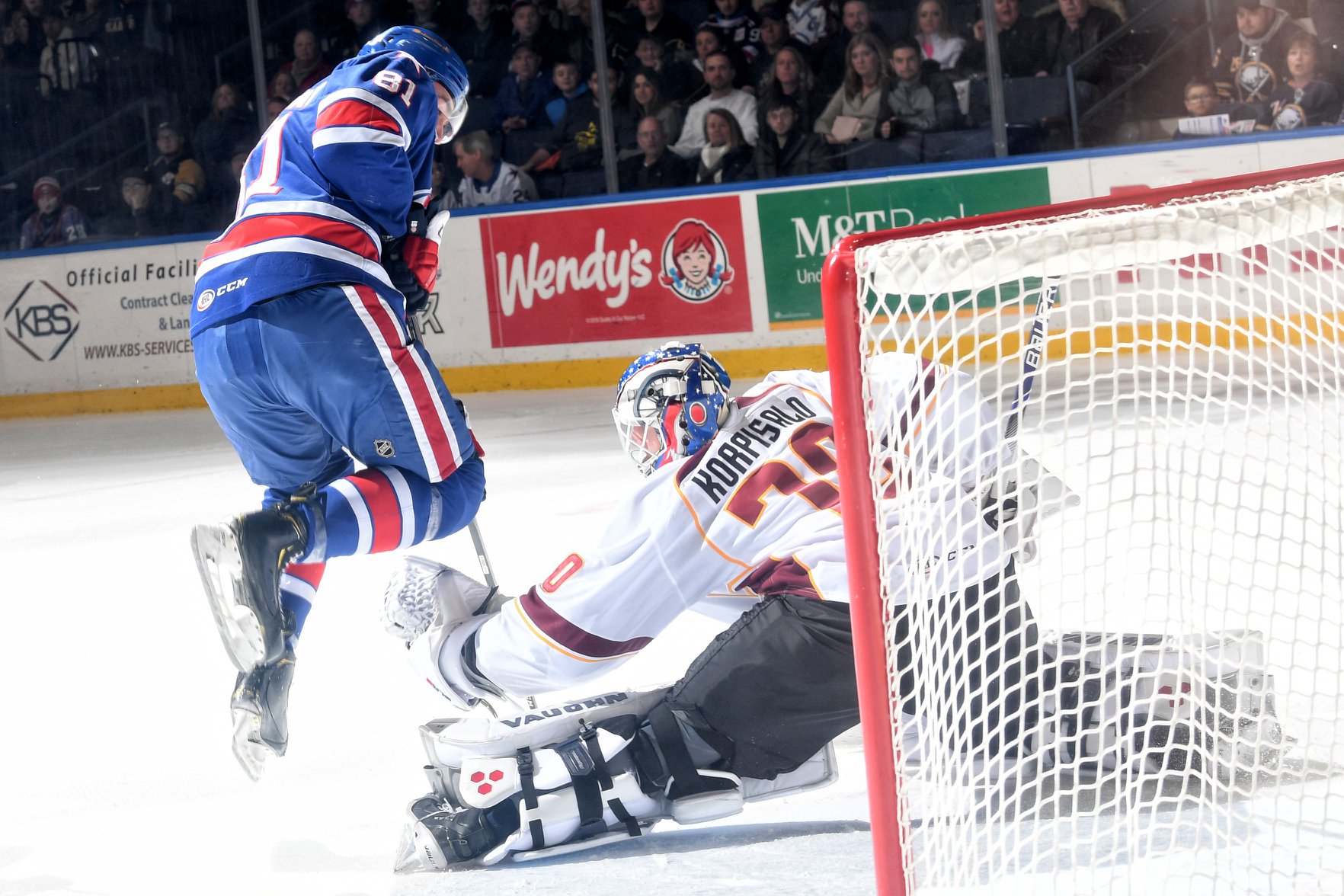 It was another night for the Rochester Americans where they had more scoring chances than the other team but unfortunately results are based on goals, not chances. The Cleveland Monsters capitalized on what few they did have and departed Rochester with a 3-2 win and giving goalie Ukko-Pekka Luukkonen his second overtime loss in his second start of the week.

“I thought we had a pretty solid effort from the get go to the finish, just one of those games,” defenseman Andrew MacWilliam said following the game. “I can’t remember what the shots were but I thought we played well and that kind of stuff happens in this league.”

The final shot total was 34-13 with Rochester having the advantage. Cleveland only had three shots in the first period and scored on two of those which were also their first two shots.

Trey Fix-Wolansky scored the first goal of the game just 3:59 into the first period on the first shot of the game for Cleveland. Ryan MacInnis saw Fix-Wolansky come off the bench heading down ice and sent a pass up the middle to him on a breakaway. A quick shot under the glove of Luukkonen and into the net.

“The first one, kind of a mental lapse by myself. The guy came off the bench behind me and got a breakaway. That’s not something you want to give up,” MacWilliam said. “The second one I think was just an unfortunate bounce off the glass. Like I said before, that stuff happens. We battled back, not the result we wanted, but we’re just going to regroup and have a good week this week.”

Markus Hannikainen scored that second goal less than four minutes later off a bounce behind the net that Luukkonen thought would be coming out the other side. Hannikainen picked up the puck up at the side of the net and lifted it over the left pad.

Taylor Leier scored a highlight goal by skating around the Cleveland defense and roofing a shot into the back of the net off a pass from Rasmus Asplund. The goal was the eighth of the season for Leier in just 20 games played this season. When Brett Murray tied the game at two it was on the 19th shot of the game for Rochester but at the same time Cleveland still only had four shots on net. It was the ninth goal of the season for Murray.

Leier has always been vocal in talking about what has happened along with what needs to happen. A lot more from him later in this article.

After the game Chris Taylor said, “We had a lot of good chances. Three cross bars. A couple on the power play hit the knob of his stick, then we had an empty hit, hit his shoulder on one, he dove across, and hit some shin pads.” When asked what the team needs to do to score on those chances he said, “Maybe quicker, I don’t know. Maybe more accurate. I thought the guys worked hard and we had a lot of opportunieis to win the game. We end up coming back though to get a point and unfortunate to lose in overtime.”

There’s 21 games left in the regular season and not much time left to figure out how to score more goals. Rochester is in a prime playoff position in the North Division and it would take an epic collapse to fall out of the race. Simply making the playoffs isn’t good enough after being swept in the first round the last two seasons.

“I’m sure he’d like to have it back obviously,” Chris Taylor said when asked about the play of Luukkonen. “I’m sure he would played a lot of things different and just like our shooters wished they would have had some of those shots back and we wouldn’t be talking about it.”

It’s also worth noting that the Rochester was facing goalie Joonas Korpisalo in net for Cleveland. Korpisalo is currently in Cleveland on a conditioning assignment after recoving from a knee injury he suffered on December 29 in a shootout game playing with the Columbus Blue Jackets.

Rochester was facing an NHL goalie while Cleveland was facing a rookie goalie that should still be in the ECHL with Cincinnati. This isn’t a knock on Luukkonen at all. Due to the Linus Ullmark injury in Buffalo it has forced a shift in the organization. Luukkonen was supposed to be playing in Cincinnati right now but due to the Ullmark injury he’s playing in Rochester with Jonas Johansson up in Buffalo. He simply isn’t ready for the American League yet. This has nothing to do with the future potential of Luukkonen, it’s just about this moment.

If this was a one game situation in which Rochester lost after having so many chances on an opposing goalie it wouldn’t be that big of a deal but this has become a trend with whoever they are playing against.

Sam Vigneault scored the overtime winner skating up the left side, blowing past Andrew Oglevie, and beating Luukkonen over the left pad. A similar goal that won the game for Belleville in overtime on Wednesday night.

Chris Taylor said, “The guys are frustrated. We had three cross bars, a couple of empty nets we missed, and their goalie played pretty well. That’s going to happen. We have to find ways to get it by him. I liked how we got down 2-0 and came back. That’s the positive of it. We could have let the game go and we didn’t and we fought back and made a good game out of it and got close to 35 shots on net.”

“If I was saying I didn’t get frustrated I would probably be lying,” Andrew MacWilliam said. “But it’s just part of being a professional. Just have to come back to work on Monday and get back to it.”

Brett Murray talked about frustration saying, “I think everyone is a little frustrated when you don’t get the outcome you want but we got a point out of them. We’re a little frustrated but we’re happy we’re going through it now I guess if you look at the positives as opposed to later on in the season or post season. All of the games are going to go come down to one goal. We’re going to build from this, learn, and hopefully get better.”

A majority of players will give quick replies and stick to the cliches and then there’s Taylor Leier. He’s well spoken and in his sixth professional hockey season he isn’t afraid to start speaking. The quotes from Leier could be an entire game story.

Asked if it’s getting a little bit frustrated Leier said..

“Right now I’m frustrated but part of professional hockey is the next day you have to wake up and reset. There’s of ton of games and I think part of the job is that you have to take one game, deal with it that night, think about it after the game, but obviously there comes a point where you have to get over it and there’s a next big coming up and that’s three games this week. This was a week where I thought we should have had all six points and that’s frustrating to me. We had a not very good start tonight. We just had a couple of mental errors and it resulted in two goals and we’re trailing the game before you could blink. Those little things add up and if we group those together in the right way I think it’ll turn into good things for us. Right now I’m a little pissed off and tomorrow I’ll be fine but right now we finished the game ten minutes ago. Losing in overtime sucks abut it is what it is and we’re going to get through it. There’s 21 games left and we’re focusing on that.”

On the positives of the comeback and regrouping after being down..

“Mental toughness and not giving up when you’re done. Guys need to step up and make plays and put the puck in the back of the net. That starts in our own zone. Starts at the blue line, defensive blue line, offensive blue line, and maintaining puck possession. Each team that we play is different. Lehigh last night, Cleveland tonight. Cleveland was pretty much get the puck, get it out of their zone, and chase it down. You have to adapt to each teams system. That 2-0 to start against is not ideal and we did a good job coming back to make it 2-2 but we have a few things to work on and really focus on and dial in mentally. It’s not usually physical, it’s always mental, and those little things they add up quick.”

When asked what he meant by mental and if it’s quick second decisions when shooting or something else..

“It happens fast. It’s nothing to do with shooting. It’s five seconds before a play happens, being in the right position, being in sync with your line mates and D partners. You know, all the little positioning plays, puck placement. Like I said plays at the blue line. Those plays are the little plays that go unnoticed but those are the plays that add up and they add to wins and if we want to win now and win in the playoffs we’re going to have to make a lot of those plays and a lot of the right decisions. That’s what we’re focusing on.”

Rochester is back home Wednesday night vs Utica and again Friday night vs Laval. Two more divisional games against teams looking to rise in the standings.

1 thought on “Recap: Frustration has Arrived and Another Overtime Loss for Luukkonen”