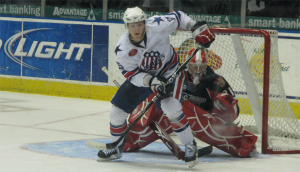 “Our top guys didn’t have their best game,” Benoit Groulx said after the game.Â  Inconsistency will be what brings this team down heading into the spring.Â  A few days ago the talk was about a four game winning streak and the Amerks winning six of their past seven games.Â  On Sunday they found a way to lose to a team that’s in second to last place in the league.

What happens when someone who has played in over 1,000 NHL games see’s an AHL rookie make a mistake?Â  He takes advantage of it and turns the play into a goal.Â  The Amerks were on the power play and Scott Hotham was not able to control the puck at the blue line and when Brad May saw that he took off with the puck down the ice.Â  May made a nice drop pass to a trailing Patrick Rissmiller at which point Rissmiller put the puck into an empty net past Alexander Salak.

That goal leads to another issue, defense.Â  Yet again a bad turnover by an Amerks defenseman resulted in a goal.Â  The game winning goal was scored in similar fashion.

“We control our own destiny,” Benoit Groulx said after the game.Â  “I’m disappointed, we should have found a way to get a point.Â  We were missing something today.Â  We lost a lot of energy on Saturday.”

The Crunch on Saturday night did what they like to do.Â  If they’re going to lose they try and take you off your game and what they did possibly effected the Amerks on Sunday.

Victor Oreskovich tied the game 1-1 at 17:33 of the first period with a backhand goal after David Brine won a face off and Clay Wilson got the puck over to Oreskovich.

The Griffins were able to tie the game at two at 19:10 of the second period off a power play goal from Justin Abdelkader.Â  Salak made the initial save but apparently could not hold on to it or it was knocked free and Abdelkader was able to stuff it into the net.

Ole-Kristian Tollefsen scored the game winning goal at 10:52 of the third period with a shot from the blue line that appeared to go off the leg of either Mike York or Clay Wilson.

The play for the game winning goal started after Clay Wilson made a horrible turnover in the neutral zone which led to the offensive attack by the Griffins.

The special teams, turnovers, inconsistency, and lack of being able to make a big play when needed is something that has haunted this team all season.Â  The Griffins scored a short handed and a power play goal.Â  The Amerks were scoreless on six power play chances and failed to make anything happen on a five on three opportunity.

** Graham Mink was the veteran chosen to sit out the game which is why he did not play and Daniel Steiner did.Â  I’ll go with the assumption that it’s because Steiner has played well and Mink’s wife just gave birth.

The Amerks are on the road next Friday against the Binghamton Senators and against the Wilkes-Barre/Scranton Penguins on Saturday.Â  Home ice advantage against either Abbotsford or Manitoba is going to be a big deal so every point counts at this point in the season.