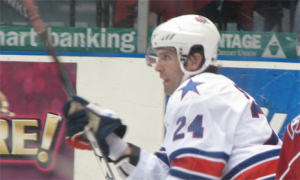 The Amerks lost two games on the road this weekend and sent Daniel Steiner back to Reading.Â  That’s the weekend in one sentence.Â  I took the weekend off from watching Amerks hockey and apparently I did not miss all that much but felt the need to write a recap of the weekend.

** Daniel Steiner has been sent back (technically loaned) to the Reading Royals of the ECHL.Â  Steiner had spent the first part of the season with the Royals after he was not able to land a job in the NHL or AHL.Â  He is signed to a contract with the Amerks which is why he was technically loaned.Â  Steiner is considered a veteran and with the other veterans healthy he was the odd man out.Â  It’s better for him to get playing time than sitting out every game here.Â  (Prev article: Steiner is Living the Dream)

** The Amerks lost 4-2 on Friday against the Binghamton Senators.Â  If you look at the final stat sheet you’ll see that B-Sens goalie Chris Holt scored an empty net power play goal.Â  Yes, a goalie scored against the Amerks.Â  The Senators had a three goal lead until Graham Mink scored his first goal in since February 6th in the final second of the second period.Â  Mink finally ended a drought of 14 games without a goal.Â  John de Gray scored at 2:49 of the third but the Senators held on for the win.

Here’s a video of the goal that Holt scored.

** On Saturday night the Penguins scored three power play goals on their way to a 5-4 win over the Amerks.Â  Two of those power play goals were in the first five minutes of the game.Â  Jeff Taffe scored a pair of goals (his 24th and 25th of the season) along with Jordan Henry and Chris Taylor also putting pucks in the net.Â  It was too little too late for the Amerks.Â  I did manage to watch a few minutes of the first period and from what I saw was a Penguins team out skating the Amerks all over the ice.

Mike Duco was involved in another quick uneventful fight, this time against Brian Strait of the Penguins.

The Amerks penalty kill unit gave up six goals on 15 chances for the opposition this weekend.Â  Taking that many penalties and also allowing that many goals is horrible.Â  The Amerks are now on a three game losing streak heading into Wednesdays road game against the Lake Erie Monsters, a team they have lost against five times already this season.

Prior to this three game losing streak the Amerks had gone 7-3 in their past 10 and given signs they were going to be playing good hockey again but it seems like they’re back to their losing ways again.Â  With only 10 games left in the regular season now is the time for a great stretch to really gain some momentum heading into the playoffs.