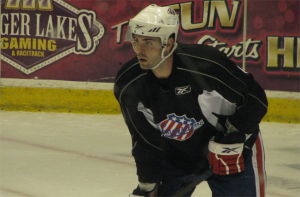 Newly acquired Mathieu Roy hurt his left ankle on Tuesday morning during practice and did not make the trip to Cleveland.Â  Roy hurt himself as I was taking a walk from the seats to the back hallway so I didn’t catch what happened but he appeared to be in some pain when I saw him in the hallway.Â  He’s supposed to be the physical veteran player on defense for the rest of the season, but the move could turn out to be a bust if as he was injured when traded for and is injured again.

Rory Fitzpatrick also stayed behind with his groin bothering him, he’s day to day.

Down two defensemen the Amerks called Scott Hotham back up from the Florida Everblades.Â  Hotham has been acceptable at this point in the season on defense.

Technically the Amerks are down what should be four regular defensemen right now.Â  Garrison and Ellerby are called up through the end of the season and now Roy and Fitzpatrick injured.

What would have been an interesting experiment to try is have Steve MacIntyre play on the blue line.Â  MacIntyre was a seventh player on defense at practice on Tuesday and to be honest he looked like he fit in.Â  MacIntyre started his playing days on defense so it’s a position he’s familiar with.

Who are we kidding though, that’s not something done this late in the season.