The Rochester Americans finish up their stretch of four games in six nights when they host the Syracuse Crunch at 7:05pm at Blue Cross Arena.Â  The Amerks are .500 right now at 2-2 and the Crunch are undefeated 2-0.Â  After losing their first two games of the season being outscored 10-3 the Amerks have won their last two outscoring the opposition 10-3 with seven of those goals this past Sunday.

After the first two losses there was talk that the lack of a quality preseason scheduled played into those losses and depending on how the next few games go that could prove to be true.Â  The offense looks night and day different in the last two games than the first two games.Â  The players are connecting passes, they’re finding each other on the ice to make plays and overall seem to know each other a lot better. 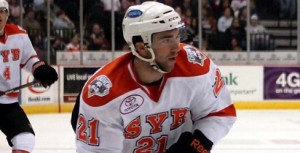 One of many players to keep an eye on tonight is Kyle Palmieri of the Syracuse Crunch, a player developed by Amerks Coach Ron Rolston.Â  Palmieri was the AHL player of the week after scoring four goals and two assists in two games for the Crunch.

Amerks rookie Jonathan Parker had a solid game on Sunday scoring a goal and also tallying two assists.Â  HeÂ arrived atÂ Buffalo Sabres training camp on an invite and earned himself an NHL contract.Â  Not too bad! Â The Democrat and Chronicle has an article on AmerksÂ rookie Jonathan Parker “chasing his hockey dream.”

Watch for Zack Kassian, Mark Voakes and Derek Whitmore to continue to grow together and put up points on the scoreboard.Â  There has been some question whether or not Voakes can be a top center, repeat performances like Sundays can quickly put that debate to rest.

Defense is one area that has struggled after four games into the season.Â  Shaone Morrisson has looked like an AHL rookie at times and TJ Brennan has turned the puck over with poor passing.Â  Again, it’s still very early in the season and they’re just starting to get into the flow of the game.

As of writing this there has not been any additional discipline to Corey Tropp for hisÂ hit on Landon Ferraro on Sunday night.Â  Tropp and Ferraro ran into each other as they were both racing down the ice, Ferraro had to be helped off of the ice, you can see that hitÂ here.Â  Tropp was given an interference penalty and it really looks like they just ran into each other.Â  I contacted The AHL but have not heard anything back, will update if anything changes.

The Amerks game preview mentions “long time rivals” which is true except for in recent seasons when the teams have not been that good.Â  BothÂ teams already appear to be better and considering they play each other 10 times the games can mean a lot and players can quickly hold a grudge against the others.Â  The new playoff format gives the three division winners an automatic spot and the next five go based on points.Â  Even though the two teams aren’t in the same conference with 20 points in the standings on the table the games can have some meaning.

As for the misleading headline, David Leggio isn’t changing positions but based on how well he was feeding passes to TJ Brennan during warmups on Sunday night it looks like he could.Â  As everyone was leaving the ice Leggio was in the cornerÂ feeding pucks to TJ Brennan taking one timers on net.Â  He looked like he was having fun doing it as well.Â  Just one of those things you see when you get there early for warmups. 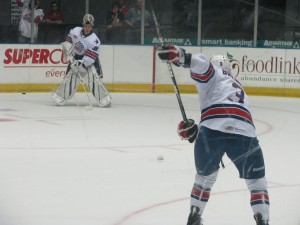 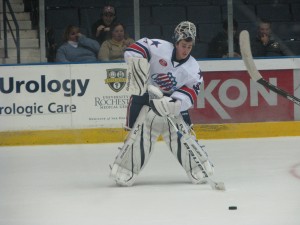 Forgive the “scratches” on the picture, the glass at BCA sucks for taking quality pictures through.