What we have here folks is a nice three game winning streak! Â The Amerks played 60 minutes of hockey where we saw them come back from a two goal deficit to defeat the Syracuse Crunch 3-2 in a shootout on Tuesday night. Â Jacob Lagace scored the first goals for the Amerks followed by the tying goal at 15:02 of the third period on the power play by Nick Crawford. Â Derek Whitmore and Jonathan Parker scored in the shootout to secure the win with David Leggio playing a key role in net for the team.

The Amerks have tomorrow off before geting back to practice on Thursday ahead of three games in three nights this weekend.

The game started out rough with the Syracuse Crunch going up 2-0 within the first six minutes of the game after costly turnovers by Corey Tropp and Travis Turnbull on the first goal and TJ Brennan on the second.

Kyle Palmieri scored the first goal of the game after the turnover by sniping the puck into the top corner after he faked out Leggio making it look like he was about to pass the puck.

“First one was a terrible goal. Â Bad goal, short side, kind of cheating on the pass,” David Leggio said talking about that first goal. Â “That one I had to regroup from and just kind of say forget about it elevate your game.”

The Crunch were able to take advantage of a poor pass from out behind the net by the Amerks and Nicolas Deschamps scored on Leggio. 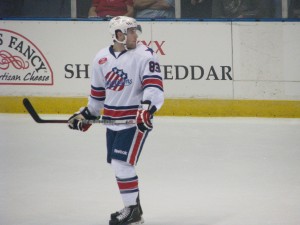 Jacob Lagace got the Amerks within a goal scoring at 10:11 of the first period with an assist to Riley Boychuck. Â Boychuck was playing the puck behind the Crunch net when he turned and delivered a perfect pass to Lagace who had skated from the side to the front of the net. Â None of the Crunch players were covering him and he had a perfect shot on an open net.

Through the first two periods I counted at least five great pad saves by David Leggio to keep the Amerks in the game. Â These weren’t your ordinary pad saves where he just stood there and and stopped the puck. Â These were saves where he would stay focused on the puck while down in the butter fly and extend his pad with the puck to keep the Crunch from scoring. Â That’s likely goaltending 101 but based on previous years those would’ve been easy goals. Â Leggio definitely helped keep the Amerks in the game.

“We’re very lucky that we have the goalies that we do,” Derek Whitmore said about David Leggio and Drew MacIntyre. Â “We’ve got guys that can go every other night, I know they don’t neccessarily like that, they like to get in the pipes and play four five six in a row but for right now both our ‘tendies’ are playing well fr us and David had a very solid game tonight and helped us with a big win.”

During Sundays game we saw Marcus Foligno drop to the ice to block a shot and tonight saw something similar by Mark Voakes during the 2nd period when he dove across the ice to keep the Crunch from taking a clear shot on net. Â It’s these little things that the players are doing that are helping them to win these hockey games.

I asked Ron Rolston about that play and he responded with,Â “We’ve talked about our slow start and the players have jumped on board with the way we need to play as a group right now with the youth that we have on our team, we’ve got to be a team that plays with a lot of effort and second effort plays and that play showed it. Â I think guys are trying to set a standard as what we’re going to be as a team and in order to set a high standard you have to make those plays, you have to block shots, you’ve got to work hard getting back to help the defense and Mark is one of those players that really a great two way player and Â can do everything for you. Â Heart and soul guy for us.”

Joe Finley had another great game standing tall keeping players out of the crease and even out of the zone. Â He appears to have shown more confidence the more he has played showing that he should deserve a spot in the top six once everyone is healthy.

With 7:43 remaining in the third period Derek Whitmore was layed out hard into the boards but referee Darcy Burchell did not call a penalty for whatever reason. Â After Whitmore got back up on his feet he went after the Crunch player and tackled him to the ice to earn a roughing penalty. Â The Amerks were down by one goal at the time and it was not the time of a game you want to go down a man. Â The penalty kill unit did a great job killing off the penalty to give the Amerks another shot with five guys on the ice.

“That’s just anÂ undisciplinedÂ play by a vet guy like myself, I can’t be doing that especially in a tight game,” Whitmore said. Â “I take full responsibility, I thought the hit was a little from behind. Â I have to be smarter than that in a tight game. Â Luckily the boys bailed me out on the kill and we were able to tie the game and win in the shootout but that’s unacceptable from me.”

Rolston said he didn’t see what Whitmore did because of where it happened on the bench side but commented saying, “Whit is an emotional player in terms of how hard he plays and how much he cares for our hockey team. Â I know if it was a mistake on his part he’ll certainly be accountable for it and make amends. Â I don’t have any worries about Derek Whitmore and what he’ll do and how he’ll take care of things.”

Nick Deschamps did the Amerks a favor with 5:18 remaining in the third by shooting the puck at David Leggio after the whistle had blown from an obvious off side which gave him two minutes in the box for unsportsmanlike conduct. 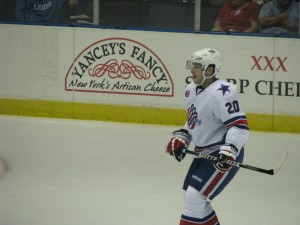 That gave the “shooooooot” shouters a chance to be heard as the Amerks went on the power play. Â The power play unit of TJ Brennan, Nick Crawford, Colin Stuart, Corey Tropp and Mark Voakes the chance to cycle the puck and get something setup and they were successful. Stuart passed the puck to Brennan near the blue line who then sent the puck cross ice to Crawford who skated in and chose top corner stick side to tie the game 2-2.

“He was another player that took advantage of a couple injuries, jumped into the lineup and has played great for us,” Ron Rolston said post game talking about Crawford.

The game went to overtime and the Amerks had a 4 on 3 power play after Kyle Palmieri was sent to the box for holding the stick of TJ Brennan. Â The Amerks were not able toÂ capitalize which sent the game into a shootout.

Kyle Palmieri scored first for the Crunch by going back hand after tricking Leggio into trying to make a save.

“As a player you kind of want to work on a couple of moves just to have a few in your back pocket and that’s one of them and it worked out,” Whitmore said about his shootout goal.

Jonathan Parkers game winning goal was something that he had planned out. “I was thinking back to my rookie year in the WHL where I was the last shooter in the game, I score and we win,” Parker said. Â “I basically mishandled the puck and dumped it off into the corner instead of getting a shot on net.”

He was successful this time putting the puck past Tarkki glove side to win the game.

The Amerks never gave up in the game, didn’t let mistakes slow them down, they continued to play and play hard. Â Players who turned the puck over early in the game were finishing hits and playing the puck much better later in the game.

When asked about staying in the game Jonathan Parker said, “That shows how much character our locker room has in here, we talked about playing a full 60 minutes and finishing it off in the third period. Â We battled it out, played a good overtime and eventually won it.”

** Michael Ryan was out for the second straight game after complaining of a headache on Sunday but is expected back on Friday. Â Shaone Morrisson sat out the game, only thing known was that he was sick.