The game wasn’t all that exciting but on the scoreboard it was a close one, the Toronto Marlies defeated the Rochester Americans by the score of 2-1. Â A Marlies shorthanded goal late in the third period was the winning goal for the Marlies.

The worst part of the game seemed to be when Marcus Foligno was hit in the ankle by a shot from Nick Crawford. Â Foligno went down to the ice and pain and had to be helped off the ice and down the tunnel. Â The good news is that there does not appear to be any type of injury and he’ll probably play Saturday afternoon in Toronto. Â That’s all the Amerks would’ve needed was to lose another player.

Back to the game, there were chances for each team as you’ll see in the highlights below but not many of them were quality chances. Â Pucks were going directly into the chests or pads of both goalies. Â Leggio made some great saves at times. Â The Marlies got lucky the puck didn’t bounce one way in the Amerks favor at times.

The Marlies did what the Amerks have done in recent games, prevent a lot of traffic in front of the net to limit those chances.

One thing that hurt the Amerks was their top scorers not producing the big chances, Whitmore, Szczechura, Stuart or even Kassian. Â I don’t think you can blame the loss on those guys at all but this was one of those games where you need one of them to step up and make something happen. 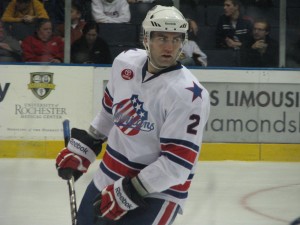 Joe Finley scored his first goal of the season with a wrist shot from the point that somehow made it past Marlies goaltender Mark Owuya. Â He picked a perfect spot and it went past everyone into the net (or he simply got lucky). Â Looked like your standard shot from the point to get the puck on the net and it just happened to go in.

The Marlies tied the game 1-1 at 10:16 of the second period off a goal from Greg Scott. Â David Leggio made the initial save but the puck landed in the crease and Scott tapped it in. Â Leggio was obviously pissed off after the play and got up and immediately shoved Scott to the ice as he went to have a few words with the referee. Â Brayden McNabb was near him in the crease and maybe bumped Leggio but Leggio thought it was the Marlies player? Â Did the other Marlies player hit him with his stick as he swung around? Â No idea, watch below and decide.

The game winning goal scored at 17:32 of the third period by Jerry D’Amigo was a great wrist shot off of a breakaway that went top shelf past Leggio. Â The puck was along the boards and they managed to get the puck out of their zone with Schiestel and McNabbÂ backpedalingÂ to catch up. Â A great shot but would’ve been an even better save by Leggio.

There was a lot of puck movement during the game but very little to generate excitement out of the 6,717 people in attendance. Â There weren’t any fights. Â There wasn’t even any big hits which was evident by the lack of a “collision of the game.” Â It wasn’t a bad game, just wasn’t very exciting.

The Amerks were coming off of a four game winning streak and tonight they ran into a team that’s playing just as well as they are. Â The two teams are now tied for first place in the North Division and play again Saturday afternoon at 3pm. Â Both teams took off pretty quick after the game in their busses for Toronto to get some sleep before the game.

Here’s those highlights from the Marlies: