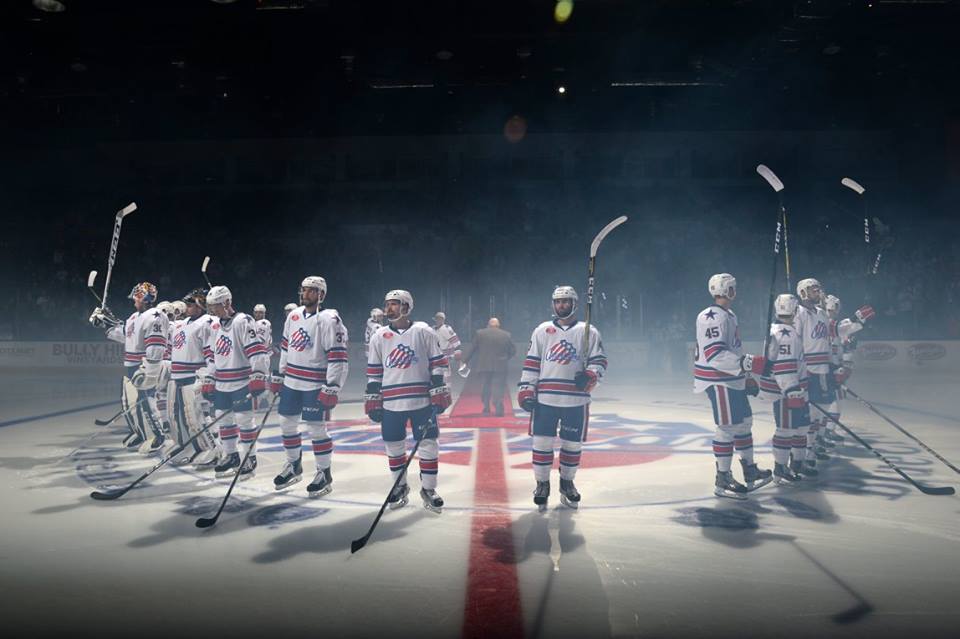 The Amerks started the season with a 3-1 win and Justin Bailey had the post game quote of the night that we’re loving. He said, “We wanted to show the city of Rochester it’s going to be a change of pace around here.”

Tell your family, friends, neighbors, coworkers and everyone else you can that the guys playing in Rochester are on board with a new culture (that used to be the old culture) of playing to win. Yes, they want to get better to play elsewhere but success elsewhere first depends on success here.

On what he was most impressed by tonight, â€œI thought Linus played a great game for us. He stood in there. Made a lot of big saves for us at critical times.â€

Tails on Bailey, â€œI liked his game in some parts. I still think his details and little things he needs to improve on but itâ€™s not going to change overnight, not going to change in one game. Itâ€™s a process. He knows it. We talk about it on the bench. When he wants to go and he wants to play heâ€™s really good. He can skate. He can beat defense one on one. Has a great shot but thereâ€™s other aspects of his game that heâ€™s got to pick up.

On his mentality coming back to Rochester, â€œI think everybody has accepted where theyâ€™re at and they want to do well here and theyâ€™re going to have to do well here to get recalled if they do get recalled. Thatâ€™s the whole culture change that weâ€™re doing here is that when weâ€™re down here playing as hard as you can youâ€™re trying to get better as a player and youâ€™re trying to get better as a teammate.â€

On his first win, “it feels great. I couldn’t be more ecstatic and I feel lucky to be part of it but again it’s only one game, 75 more, we have to keep going. Syracuse had a lot of good chances.”

On saving the puck or getting a memento, â€œThe guys gave me the puck after the game, already in my office up on my wall.â€

“I thought we played a good game. Full 60 minutes. They pressed at the end and obviously our goaltending was phenomenal.”

“They bought in tonight. They played the system well. We have a few kinks to work out but as a first game goes against a great hockey team we’re pretty pleased.”

On what he liked most, “Wee got a two nothing lead and we didn’t really sit back, we kept going and got that third goal and the guys clamped down. Obv they got that one goal there buzzing but I thought that was real winning hockey in the 3rd period, a sign of a smart hockey team.”

Side note: I was at practices all week and they’ve had a great pace and a mixture of praise and telling the guys to get their shit together. Players don’t appear afraid to ask questions and at the same time the coaches don’t hesitate to show players when something isn’t being done correctly and how to correct it.

“I think for us as a team I think we started off very well. All four lines contributing in their own way. It was just awesome hockey to play tonight.”

“We wanted to have a fast start. We wanted to show the city of Rochester it’s going to be a change of pace around here and I think from our goaltender and all the way through our team I think everybody contributed in their own way and that’s what the outcome is when everyone pulls their end of the rope.”

“I think the mentality in practice was we need to change the culture around here. We want to come out here and defend our home ice early on in the season.”

“Everybody was really working. You see that work ethic from Criscuolo’s line especially that comes to mind, they were buzzing the entire night and you see guys doing that and everybody wants to give their part to the team.”

Does it feel like everything was going right tonight? “You know what, I think so. I think we did everything we were supposed to do tonight and it shows how good of team we are and also how good of a team they are. It’s a tight game. A lot of bounces for us. Could have had a lot more bounces for them.”

Is it disappointing to lose the shutout? “It’s no big deal.”

“I got to take a look at the video footage tomorrow and see what I could have done tomorrow.”

The full clips are here: