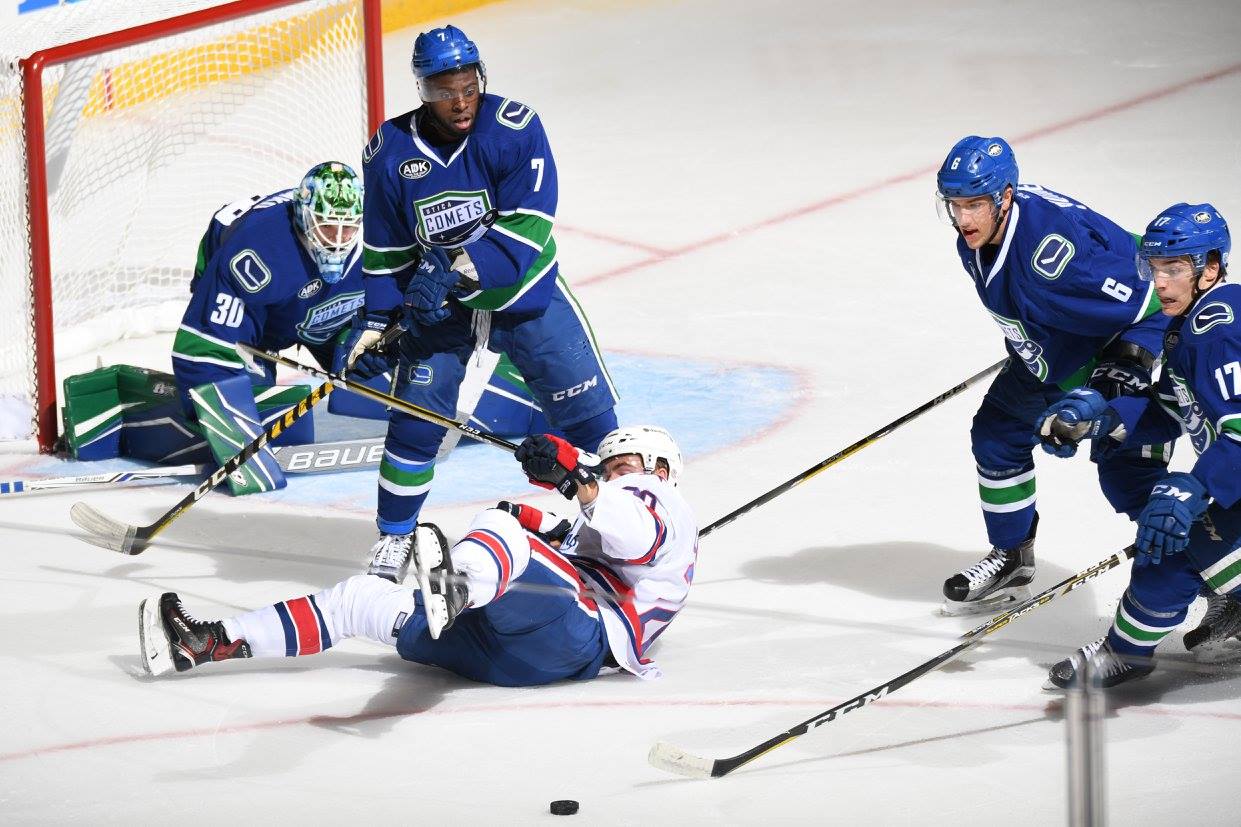 The Amerks started the season with two wins over the Syracuse Crunch and with only one game this weekend they should’ve come out but the opposite happened, they fell flat from the start. The rest of the game was an uphill battle they weren’t able to recover from.

â€œWe werenâ€™t ready to play. We started off lackadaisical,” Kevin Porter said after the game. “That starts at the top. That comes from me and the other leaders on this team. Weâ€™ve got to make everyoneâ€™s ready to play. This is a young team and that falls on us.”

Unfortunately the team could be down a leader. Nathan Paetsch blocked a shot in the second period, remained on the bench, took a quick skate between whistles but wouldn’t play again. He ended up leaving the game with a boot and crutches. Also known as a lower body injury.

Back to the game, Utica scored 46 seconds into the game after a botched play behind the net. Ullmark tried to play the puck and instead of stopping the puck behind the net at the boards he pulled it away which gave Reid Boucher an easy pass to Nikolay Goldobin who tapped it into an open net.

“We can’t expect wins are going to come because we have a lot of skill and great goaltending. We have to put the work in,” Nick Baptiste said post game. “They outworked us tonight and that helps in this league. When you’re outworking teams you’re going to win most nights and we didn’t have it tonight.”

The Amerks managed to get 19 shots on net in the second period for a total of 33 shots the whole game may look great on paper but the scoring opportunities the whole game were under five.

Taylor talked about shots and Comets goaltenderÂ Thatcher Demko saying, “if he see’s it, he’s going to save it, we didn’t get into the dirty areas.”

The best chance was this shot by Nick Baptiste who was robbed byÂ Thatcher Demko of the Comets.

Patrick Wiercioch scored in the second with a shot from the slot after taking a a pass fromÂ Reid Boucher for his second assist of the night.

Look at the week ahead to a two game home stand next weekend Chris Taylor said, “It’s going to be a hard week. We got to change what we do, our habits, turning away from pucks, not getting to the net, boxing out, being stronger going to the net. We’ve got to fix all of those problems and yea it’s not going to happen in another week but we’re certainly going to improve on it.”

“When we play as a team good things happen”

It’s obvious to everyone in the hockey world that the Buffalo Sabres aren’t off to a good start and it’s possible that’s lingering in the minds of some. The old way of doing things in the past was players having a great game or two in the minors and earning a call up to try and spark a change. Chris Taylor talked about guys playing individually vs playing as a team which isn’t going to fly saying, “Guys gotta realize that’s not the way. You need everyone to help you out and play as a team and when we play as a team good things happen.”

That’s what the attendance was for a Friday night home game after starting the season with back to back wins.Â No need to hit a panic button after only the second home game of the season regarding attendance but that’s a very low number after a quick start and a summer of hype. Why so low? Over a decade of poor hockey as was seen on Friday night and youth sports are the likely major reasons. We’ll continue to push that winning will be the best selling point.

There’s a lot of season ahead and a lot to work on.