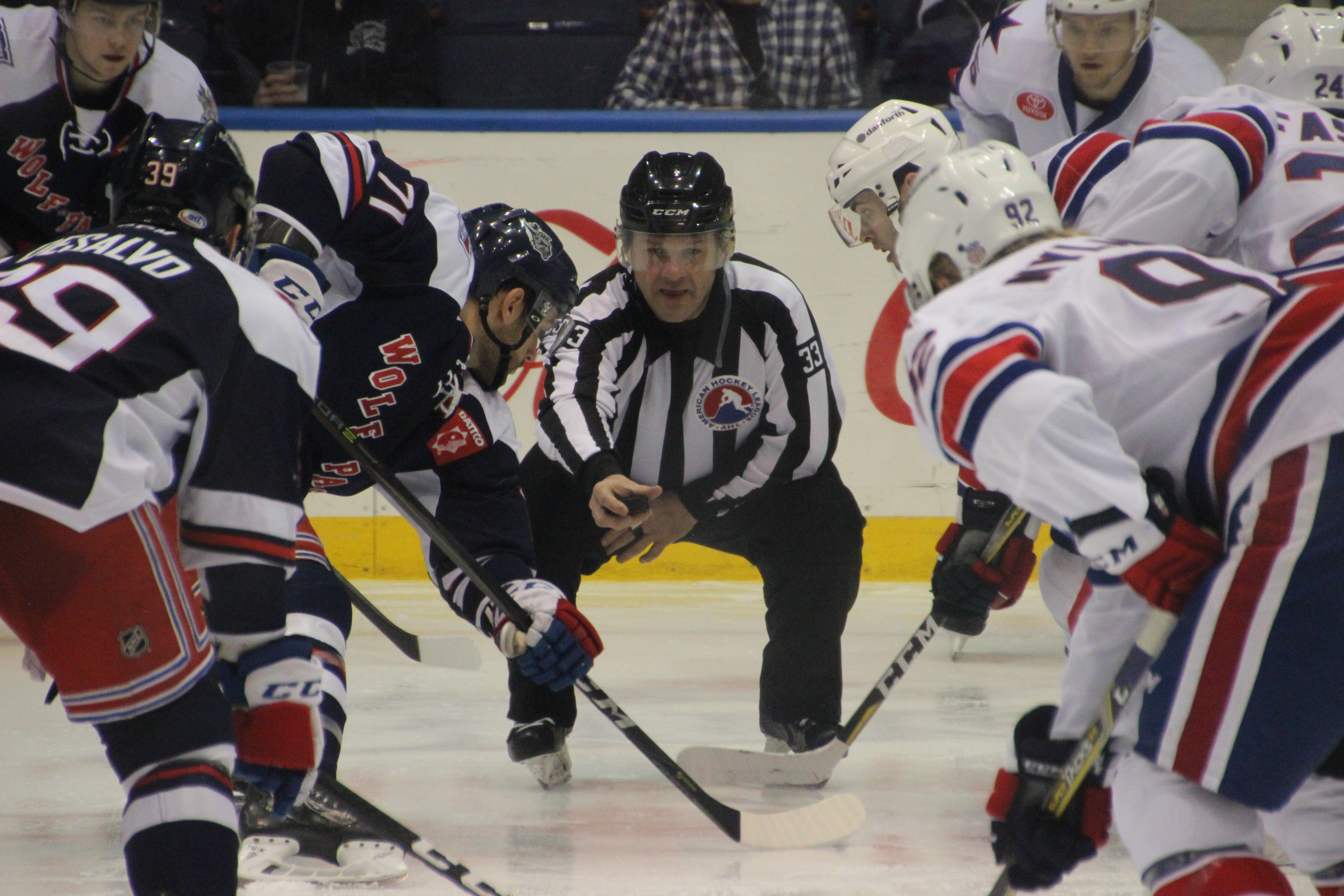 Rochester could easily be in third place overall in the league if it wasn’t for giving up third period leads.Â In 21 games played the Amerks have given up a lead six times in the third period. In those six games they have an overtime win, shootout win, one regulation loss, two overtime losses and the shootout loss on Friday night.

Considering the parent team is tied for last place in the NHL some may think we’re starting to get greedy in Rochester.

“In my opinion we let off the gas pedal a little bit,” Garret Ross said after the game. “When we’re dominating a team and putting all the pressure on them we need to stay consistent with that and do it for a full 60 minutes.”

That’s the story of the season so far. The talent appears to be here. They know what they need to do yet it continues to happen.

Taylor said, “It’s not consistency, it’s mental mistakes. It’s not knowing how to win the right way. We have to change it.”

Goals by Seth Griffith, Steve Moses and Garret Ross gave the Amerks a 3-1 lead early in the second period but that quickly vanished. Adam Chapie and Vince Pedrie scored two goals within three minutes to tie the game half way through the second period.

“We turned the puck over a couple of times and it was in the back of our net,” Chris Taylor said about losing the lead.

Matt Tennyson said, “second period there we had a couple of costly turnovers in the neutral zone. Obviously that can’t happen.”

Two turnovers by Nick Baptiste were costly as they lead to those two goals by the Wolf Pack. An attempted break out along the boards in the Amerks zone and then a turnover at center ice.

Some credit does go to WolfPack goalie Alexandar Georgiev who made 34 saves in the game. 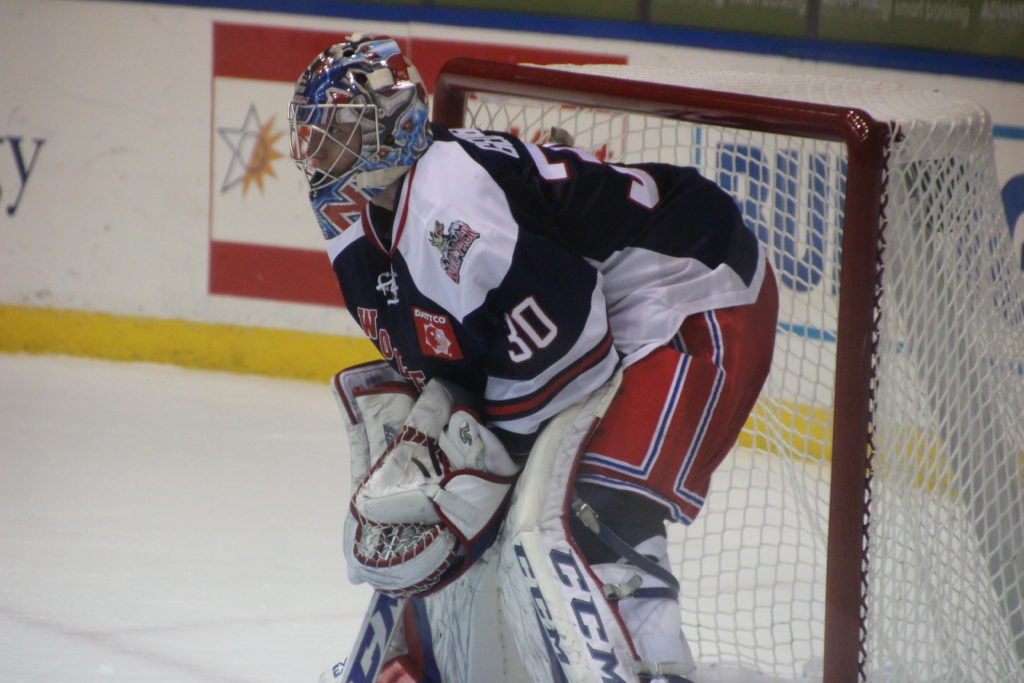 Taylor added on, “One of those games that we had a lot of chances and when you don’t score on your chances you know something is going to backfire.”

Evan Rodrigues gave the Amerks a 4-3 lead with a power play goal with 6:20 left in the second period. Alexander Nylander, who was playing a point position on the power play, made a pass to Brendan Guhle who sent a perfect saucer pass to Rodrigues on the far side.

A third period play was reviewed by the officials but determined the puck didn’t cross the line. Here’s a poor resolution screen grab to show how close it was. 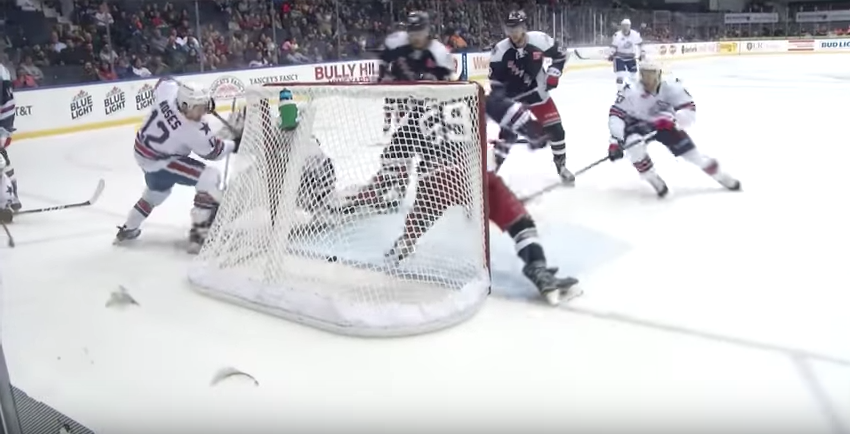 Things weren’t looking good when Casey Nelson and Evan Rodrigues went to the penalty box at the same time for tripping calls at 10:59 of the third.

A superb penalty kill by the Amerks should have been a spark but it wasn’t.

Matt Tennyson was a big part of that kill in his first game with the Amerks. Asked if that’s a positive even after losing he said, “Any time you can kill a full two minutes of a 5 on 3 it’s a positive and I thought we had a little momentum there but we have to take care of some other things to make sure we put ourselves in a good position to win.”

“That’s the heart breaker of the whole game,” was the response when Taylor was asked about the kill. “Those guys killed a 5 on 3 and all of a sudden we have a power play and at the end of the power play we throw a puck up blind, trying a no look pass. All of a sudden it’s in the back of the net. Thats disheartening for me. The whole game. Sums it up right there.”

The blind pass he’s referring to was by Hudson Fasching. Scott Kosmachuk had exited the penalty box, entered his zone, stole the puck and it was a two on one with Cole Schneider against Stuart Percy. Kosmachuk to Schneider back to Kosmachuk. The puck looked like it went in off of the leg of Kosmachuk.

The overtime was an exciting back and forth three on three. Brendan Guhle almost had a highlight goal when he put his stick between his legs but Georgiev just barely got a piece of it to make the save.

The shootout went five rounds with CJ Smith scoring the only goal for Rochester. Peter Holland scored first for the Wolf Pack and Kosmachuk scored the winner.

Garret Ross “We got a point out of it but we’re not too happy with it.”

I don’t even think we deserved the point after that,” Chris Taylor said after the game. “I’m not happy at all.”