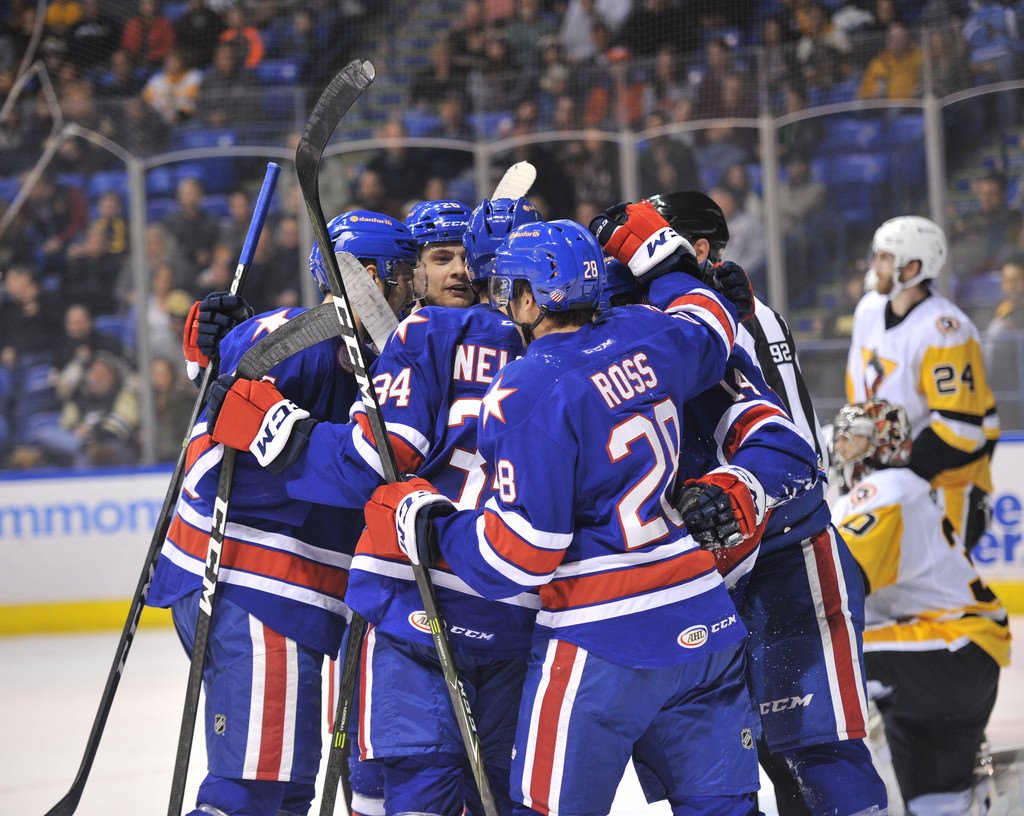 This Amerks team is fun. It’s only 22 games into the season but they’re playing as a team that should make those proud that have previously represented the logo.

The team defeated the league leading Wilkes-Barre/Scranton Penguins on Saturday night after two subpar performances. And without a top six forward that was called up.

Eric Cornel missed two games as a healthy scratch but jumped right back into the lineup after Hudson Fasching was called up and scored the Amerks first goal of the game as the team went on to win 5-2.

It wasn’t a perfect game in any way as they gave up another short handed goal. The Amerks are now tied with the Penguins and Thunderbirds with six short handed goals against. Rochester also had seven power play opportunities and only scored on one.

The opening period was scoreless before an action filled second.

Teddy Blueger scored first at 3:30 after he tipped in a shot byÂ Andrey Pedan. It was also teddy bear toss night so the teams got an extra intermission as the stuffed animals were scooped up. Only fitting that a guy named Teddy scored on a night like this (too easy).

That was the only lead of the night for the Penguins when Eric Cornel scored at 8:50 of the first followed by goals from Evan Rodrigues and Garret Ross within a five minute span. Rodrigues scored his second of the game at 18:19 of the second period to give the Amerks a 4-1 lead heading into the third.

Looking for more of a breakdown on the goal scoring? Here’s two links: Chirps from Center IceÂ (a site like this) || Amerks.com article

Teddy struck again late in the third at 14:29 with a short handed goal after out hustling Guhle and a poor play by Ullmark. Teddy grabbed the puck, wrapped around the net and made it a 4-2 game.

Considering previous third period collapses this season there was reason to show concern it could happen again but it didn’t.

CJ Smith found his way behind the play with 56 seconds left in the game to score an empty net goal and solidify the Amerks win.

It was a 60 minute win. They scored, battled and besides the short handed goal against they didn’t give up much.

After an overtime loss Wednesday and a shootout loss on Friday that no one was happy with the team capped off the week with a solid win on the road playing 60 minutes of hockey against another top team in the league.

11 Amerks players earned a point on Saturday night. Rodrigues earned the first star w/ 2G+1A. CJ Smith had 1G+2A. Cornel and Ross scored the other goals as noted above. Assists tonight for Percy, Baptiste, Krause, Nelson, Griffith, Blackwell and Guhle. Ullmark with a 22 save night.

With another point tonight Guhle moves into 10th place in the league for defensemen w/ 5G+9A.

The Amerks haveÂ scored 29 goals in six games and earned points in six straight games. The team also has 29 points in 22 games.