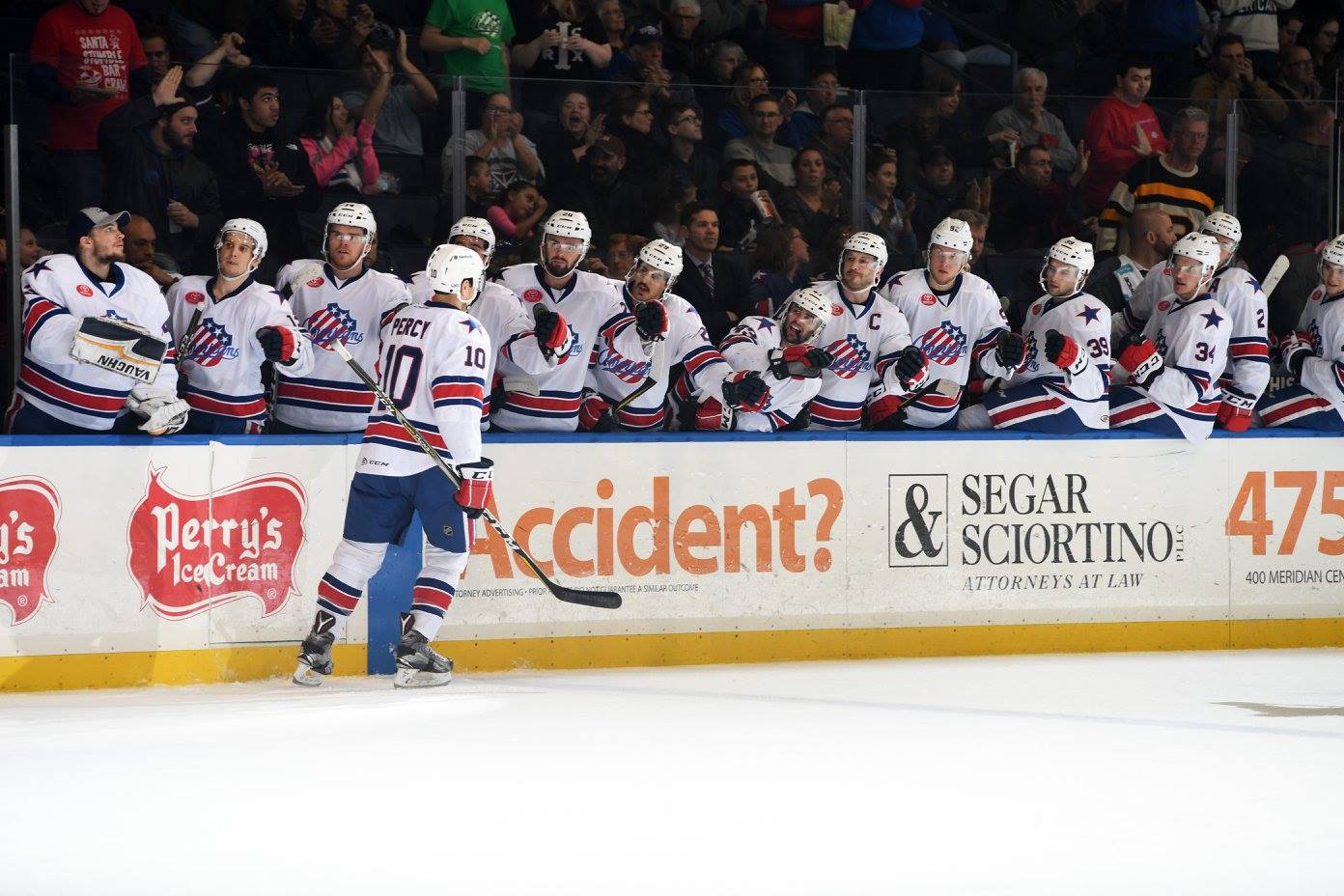 Rookie forward CJ Smith is on a hot streak and on Wednesday night lead the Amerks to a 3-1 win over the Utica Comets. He tallied one goal, one assist and a team leading seven shots on net.

He’s one of four players that has played in all 26 games so far this season and he’s earned a point this season in all but eight games this season. With 9G+18A in those 26 games he’s the leading rookie scorer in The AHL.

Comets forward Michael Carcone opened the scoring only 87 seconds into the game but the Amerks shrugged it off and moved on.

“Looking back at how we’ve been playing the last couple of weeks it was pretty easy because we know that we’re a good team and we know we can come back from that one,” Linus Ullmark said. “Just focusing on the making the next save.”

CJ Smith on the mentality after the first goal, “Just had to look past it, just get back down in there end and keep shooting the puck.”

Ullmark earned his 12th win of the season with 29 saves. He hasn’t lost a game in regulation since October 28th.

“Linus played really well for us, made some big saves when we needed them,” Chris Taylor said after the game. “Again, we got some good saves from Linus, created some good scoring opportunities and got them.”

Colin Blackwell set the play in motion for the Amerks to score first. Face off win back to Nelson, pass to Gill, pass to Moses and the one timer hit the back of the net. One of those plays that every team works on in practice and it was executed perfectly.

What turned out to be the game winner was scored by Stuart Percy in the 2nd period with assists to CJ Smith and Nick Baptiste. The play was set in motion by some excellent forechecking by Criscuolo and Baptiste keeping the puck in the Comets zone.

CJ Smith scored the third goal of the game as he tracked the rebound off a shot by Seth Griffith. Demko kicked the puck to the side where Smith was waiting to bury it and he did just that.

The only Amerks penalty of the game, there was only two penalties the whole game, was called with just under four minutes remaining in the third. Utica pulled their goalie, Amerks killed off the penalty and didn’t back down as the clocked ticked away.

This was the Amerks fourth win in five games and in all five games they’ve played the best as a team this season but the expectations are still higher. They’ll have another big game on Friday night against the league leading Toronto Marlies.

With the win the Amerks are currently on a 10 game point streak and so far this season have earned points in 21 out of 26 games.

Here’s some clips and highlights of the scoring:

Stuart Percy finds the top right of the 🥅. pic.twitter.com/RTBSApQwui

.@_CJ_Smith_ 27th point of the season and Griffith extends his point-streak to six games with the 🍎. pic.twitter.com/KSrRdGRygC