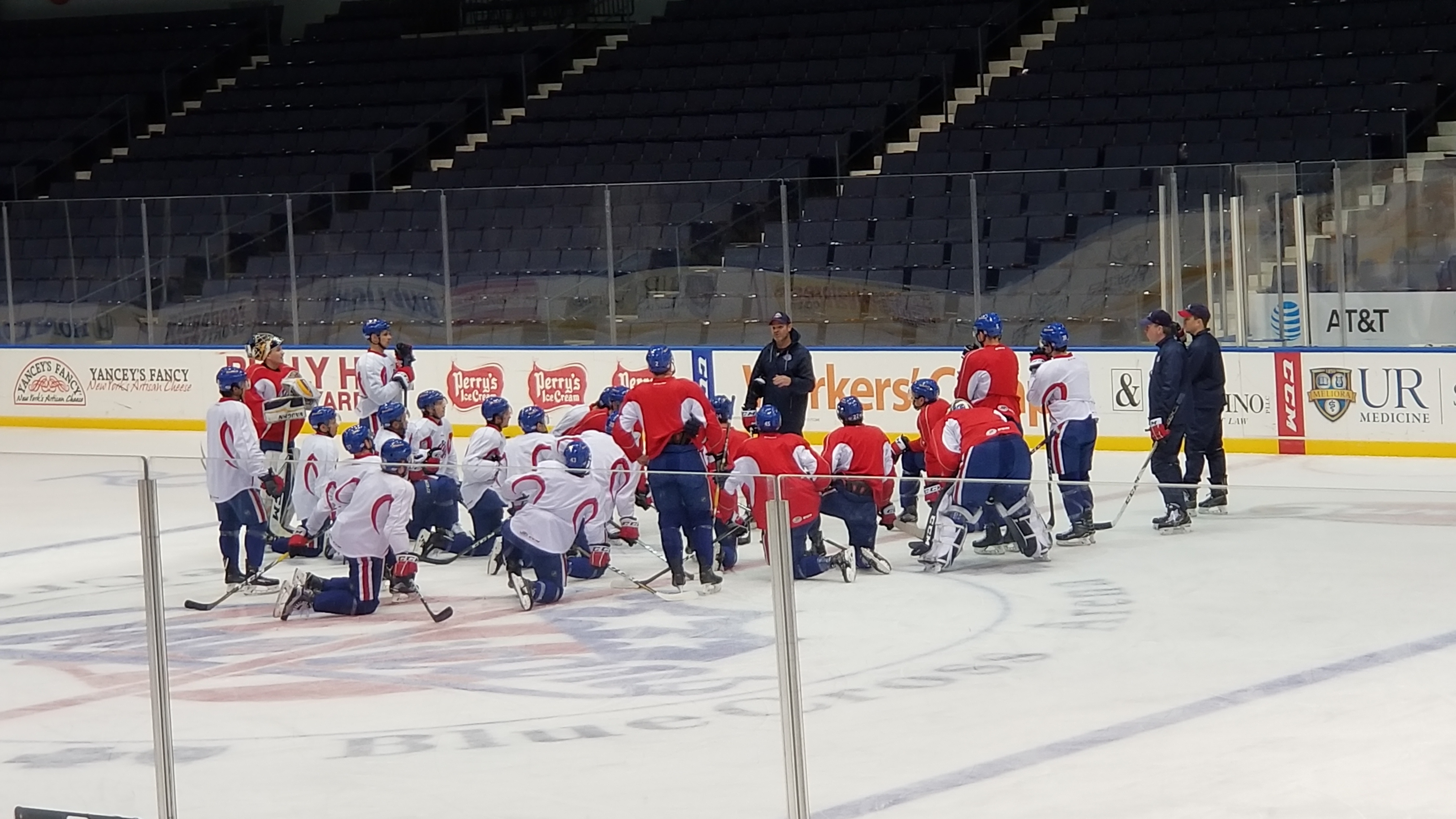 The Amerks are back on home ice tonight after three days off for Christmas break and are tied for first place in the North Division.Â Rochester is on a four game winning streak headed into the game tonight, a streak that includes two come from behind overtime wins.

Laval is the opponent again tonight, a team they defeated on the road this past weekend and will play again on Saturday night.

“This is the best part of the year. A lot of people have family coming in, they want to show the families how well they’re playing. We’re a team that’s committed to doing the right thing and everyday we’re getting better,” is what Chris Taylor said about keeping motivation going. “Everybody is motivated coming into the room each day. Everyone is a big family, they want to see each other and that’s what we’re trying to create and are creating and that’s why we’re doing well right now and will continued to do well.”

After three days off the challenge will be working off the rust. The team had a high paced game day skate that Chris Taylor applauded the guys for. Taylor said, “I thought we had a good jump this morning. The guys are excited to come to the rink and when you have that they’re excited to play. It’s fun winning, don’t ever lose that feeling and how we feel after each game and it’s great.”

Kevin Porter talked about Laval saying, “They work hard and we know we took four points in their building so they’re going to come out even harder in ours.” Porter also added on, “We were playing pretty well before the break and want to keep it going.”

A slow start after days off is expected but Kevin Porter said the way to try and avoid that is, “just coming prepared mentally and then getting a good warm up in.”

The last time the Amerks were in a position like this in the standings was the 2009/2010 season and things were a lot different that year. The intentions for success were there but the foundation wasn’t in place. Injuries and roster movements decimated the chemistry.

Comparing the month of December from then to now is two different stories.

That team lost in the first round of the playoffs for many reasons. The foundation for success and culture is a lot different this season.

In case you missed the news headed into the weekend, Steve Moses had been suspended by the team and took off oversea’s and signed with a KHL team. The story has been updated with a couple of quotes and more information. Read on..

Congrats to Linus Ullmark who was named CCM/AHL Player of the Week. Ullmark stopped 65 of the 68 shots he faced in two starts for the Americans last week, going 2-0-0 with a 1.46 goals-against average and a .956 save percentage. Of the three goals scored against him one was with only 60 seconds left on the clock.

Asked Chris Taylor about the award and he said, “Credit to everybody, that’s a team effort. Anybody that gets player of the week or any award that’s a whole team effort. Ullmark is thankful to the defense and forwards that do a great job in front of him and obviously he’s played really well, was recognized by the league which is great. That’s what our team is all about is right now.”

Ullmark said, “This award is more for the people in front of me than it is for me.” Ullmark has described himself as just a guy out there who wants to cover up any mistakes his teammates might make.

“He just wants to win, wants to be a part of it. When the team does well, individuals will do well,” Chris Taylor said. “That’s the biggest thing about our team right now. We’re thinking about team first and it’s why we’re having a little bit of success.”

Ullmark will get the start in net tonight vs Laval.

CJ Smith has taken a stumble amongst the leagues best on a three game scoring drought. The use of the words tumble and drought aren’t serious. He has 10G+20A for 30 points and is only one point back of first amongst rookies in the league. He’s currently tied for sixth overall in the league.

The Amerks own three of the top 13 point-producing defensemen in the AHL in Zach Redmond, Stuart Percy and rookie Brendan Guhle, with Redmond and Percy accounting for half of the teamâ€™s top four point-getters. Redmond, who leads all Amerks defensemen with 21 points (7+14) through 23 games, is tied for fourth in goals by a defensemen with seven, one shy of matching his career-high of eight he set twice as a member of the St. Johnâ€™s IceCaps. The veteran blueliner is also tied for third in points coming into the week. Guhle, meanwhile, ranks third in scoring among all AHL rookie defensemen with 17 points (6+11) while his six goals are second among first-year blueliners in the league.

Conor Allen and Adam Krause are expected to be the healthy scratches.

I put an asterisks next to 11 in transactions at the top because it was really 14 but Stuart Percy being released and then signed is technically two transactions and Linus Ullmark coming back from practicing with Buffalo was another. Those moves didn’t change anything on the roster.