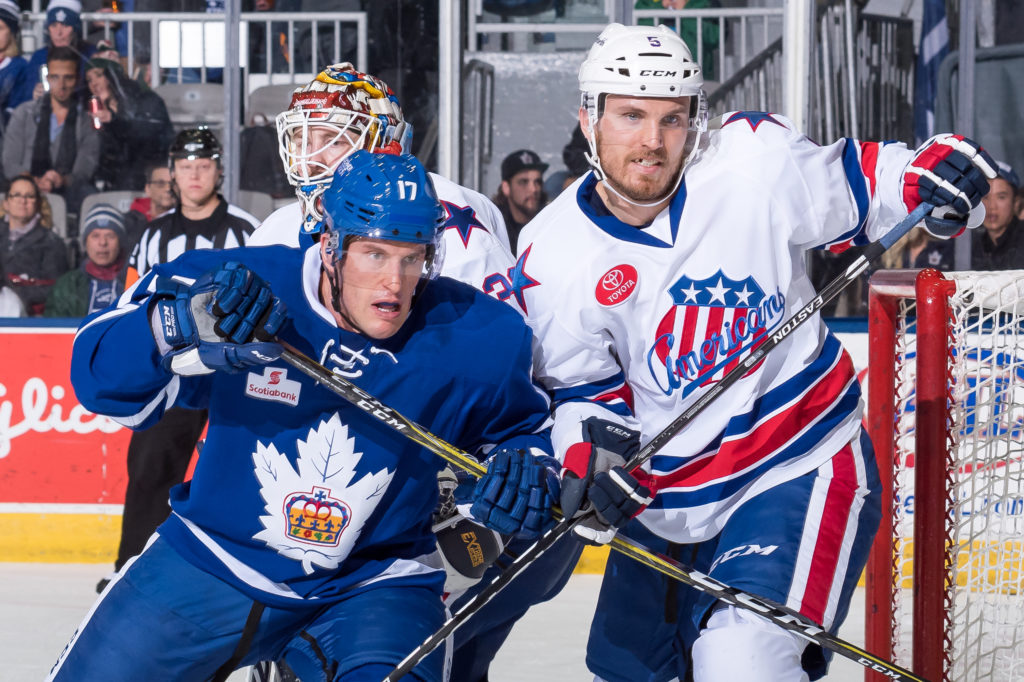 The Rochester Americans shutout the Toronto Marlies on Friday night and at least for now moved into first place in the North Division.

This was the first time the Marlies have been shutout all season. The Amerks also continue with their road success as the only AHL team to have one regulation loss on the road. Their road record isÂ 12-1-3-2.

Seth Griffith scored first in the game on a power play with 35 seconds left in the first period. Zach Redmond made it appear as if he was getting ready for a shot, passed it to Griffith and he picked the top corner.

It was their first power play goal in the previous 16 opportunities. Killing penalties has been going well. The Amerks have killed off 26 straight penalties, including eight straight games without allowing a power-play goal.

It feels like there’s a highlight save from Ullmark every game at this point in the season. He has said that he’s just there to cover up mistakes by the guys in front of him and that’s what he did here with a pad save onÂ Kerby Rychel.

It remained a one goal game until 16:33 of the third period when Sahir Gill put the Amerks up 2-0 and that was enough for the win.

Gill was able to score on the third chance the Amerks had at the puck. Kevin Porter took the initial shot, Griffith got the rebound and then Gill was able to tap in the loose puck.

Linus UIlmark made 22 saves and earned his second shutout and 15th win of the season which keeps him tied for first place in the league.

Andrew MacWilliam blocked a shot in the 2nd period with what looked like his hand and didn’t play in the 3rd period.

Laval is back in Rochester tonight when the two teams play each other for the fourth time in five games. Amerks won the first two games in Laval, the Rocket won in Rochester on Wednesday night.

Former Amerks and Buffalo Sabres forwardÂ Patrick KaletaÂ will headline tonight’s Seneca Niagara Resort & Casino Legends Night.Â  Kaleta will sign autographs and pose for photos with the fans prior to the game from 6:00 to 7:00 p.m. in the upper atrium.

A hard-working forward known for his grittiness and tenacious style of play, Kaleta spent his entire 10-year pro career in the Buffalo Sabres organization, including his first two in Rochester that saw him produce 23 points (6+17) in 94 games with the Amerks. The Buffalo native went on to appear in 348 NHL games for his hometown Sabres, who selected him in the sixth round of the 2004 NHL Entry Draft, finishing with 54 points (27+27) and 542 penalty minutes while also adding five points (2+3) in 12 postseason contests. He posted his best season as a Sabre during the 2009-10 campaign when he set NHL career-highs in goals (10), assists (5) and points (15) while helping Buffalo to its first of two straight playoff appearances.

After a brief seven-game stay with the Amerks during the 2013-14 campaign that was cut short due to a season-ending knee injury, Kaleta returned for his third stint in Rochester in 2015-16, scoring one goal with two assists in 26 games. He closed out his Amerks career totaling 26 points (8+18) and 277 penalty minutes in 120 games in the red, white and blue.

Kaleta currently serves as the Youth Hockey Ambassador for the Sabres and plays a leading role in introducing the game of hockey across Western New York through his Learn to Play program.