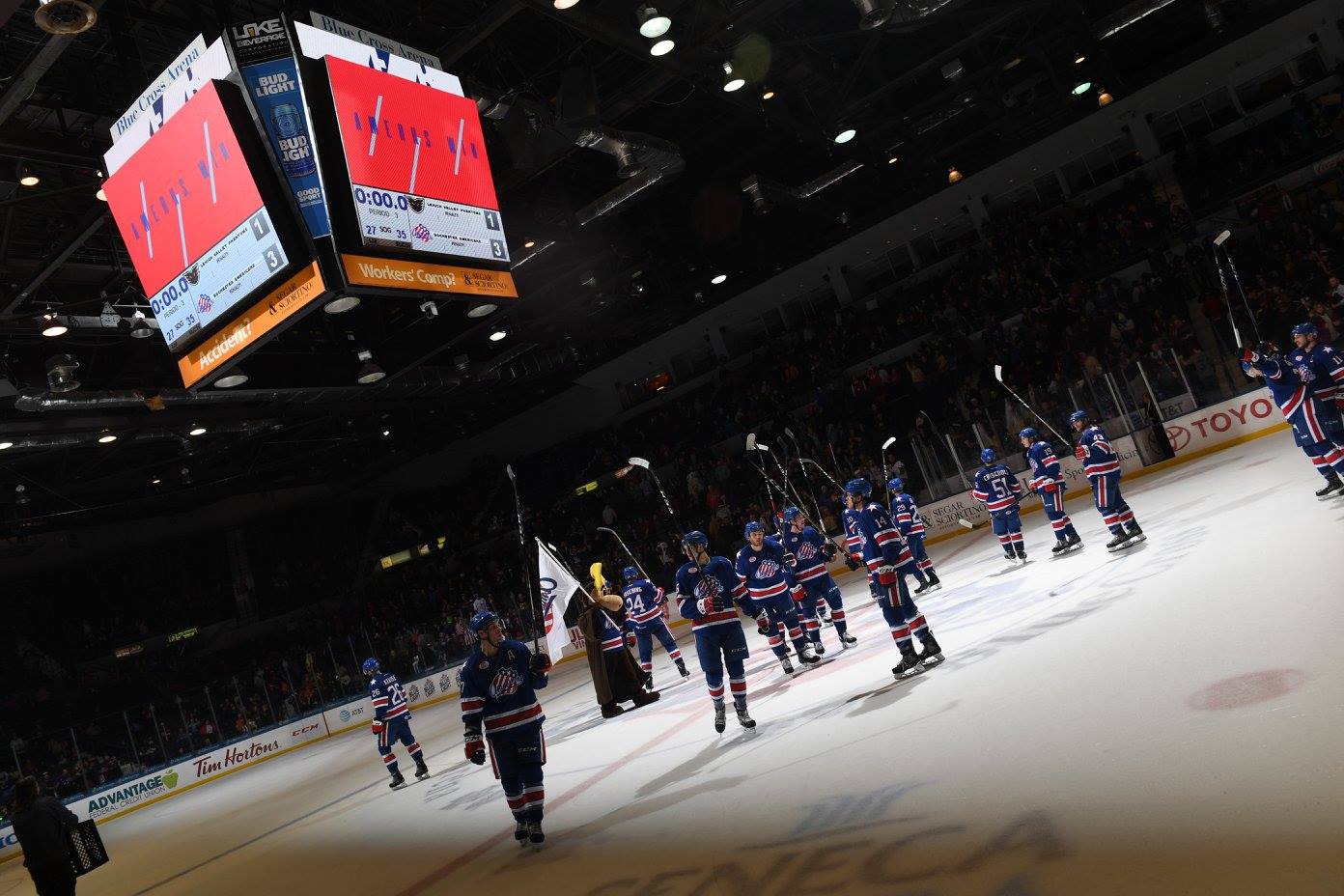 The Rochester Americans defeated the Lehigh Valley Phantoms on Saturday night at home to reach 50 points in the standings and the third team to do that in the league. The 3-1 win caps off a weekend of back to back home games when the team knew they had to win. The Amerks are on pace for 105 points, the last time they broke that barrier was the 2004/2005 season. That was also the last time they made it past the first round of the playoffs.

For anyone who may not pay close attention to the league standings, the Phantoms have been a top team in the Atlantic all season. After the game Chris Taylor said, “They’re a good team but again we measure ourselves against ourselves.”

“I didn’t really like our first period, thought we were a little sloppy but we responded in the second and third and played the way we wanted to play.”

Through 36 games this season the Amerks only have eight regulation losses with seven of those being at home. Two of those last week.

Seth Griffith talked about that after the win saying, “We haven’t play that great at home, especially yesterday, gave up one early. We bounced back today and showed that we’re a team that can play on the road and play at home. I think we proved it to ourselves when we played in Toronto and they’re a tough team and we’ve just kind of been moving forward from that every day.”

Griffith had a three point net (1G+2A) and was the first star of the game.

Kevin Porter talked about Griffith after the game, “He’s easy to play with, controls the game. Makes it a lot simpler for me and Gill and the rest of the guys.”

Just like Friday night when Chris Taylor talked about wanting Brendan Guhle to use his strengths more he said the same about Griffith tonight. Taylor said Griffith came down with a great attitude and added, “We just wish sometimes we wish he’d like to shoot a little more because he has a lot of opportunity’s that he could shoot and we’ll get him there.”

Linus Ullmark andÂ Dustin Tokarski battled it out throughout the game with quality saves at both ends of the ice. The difference was the Amerks defense breaking up odd man rushes by the Phantoms versus the Amerks able to connect and score.

“He’s an all star for a reason. One of the best goalies I’ve seen in this league,” was what Seth Griffith had to say about the play of Ullmark. “He keeps us in the game every night, we have an opportunity to win every night when he’s in the net and the same with Wilcox too.”

The Amerks have been perfect on the penalty kill and extended the streak to 37 straight kills tonight. Ullmark has been a big part of that and Chris Taylor gave him credit saying, “He needed to be our best penalty killer and he was.”

CJ Smith ended his seven game rookie slump without a point scoring the first goal of the game off a pass from Kyle Criscuolo.

Former Amerks defenseman TJ Brennan is always lethal with the puck and he tied the game five minutes later while playing four on four hockey.

T.J. Brennan ties the game at 1-1 with 9:21 left in the 1st period with this snipe from the left-wing circle. pic.twitter.com/loq8bjeKFZ

Kevin Porter scored what would end up being the game winner on a two on one with Seth Griffith and blasting the puck into the back of the net.

Griffith to Porter and this was the game winner! pic.twitter.com/KkiAYcbyU2

In a designed play, Kevin Porter connected on a 27 yard scoring drive to put the Amerks up 3-1 with 1:27 left in the game to solidify the win.

Porter connected to Griffith on a 27 yard scoring play and that was the game. pic.twitter.com/UbhvXii02X

Griffith credited the team buy in for the win saying, “We just stuck to our system. Everyone believes in the system and when we stick to it everyone’s going to get an opportunity on the rush.”

“It’s going to be a tough road the rest of the the year,” Kevin Porter said after the game. “These are going to playoff like games for the rest of the year and hopefully we battle like we did tonight.”

The Amerks hit the road for a game in Belleville on Wednesday, return home against Binghamton on Friday and travel to Syracuse next Saturday.

Alexander Nylander will be back with the team after the weekend after playing for Sweden in the World Juniors.

Nathan Paetsch has been cleared to play but is still a week away and could play next weekend.

Justin Bailey hasn’t been cleared yet but the hope is that he’ll be ready in the next week and a half.

A crowd of 5,976 was pretty good for a frigid Saturday night in Rochester!