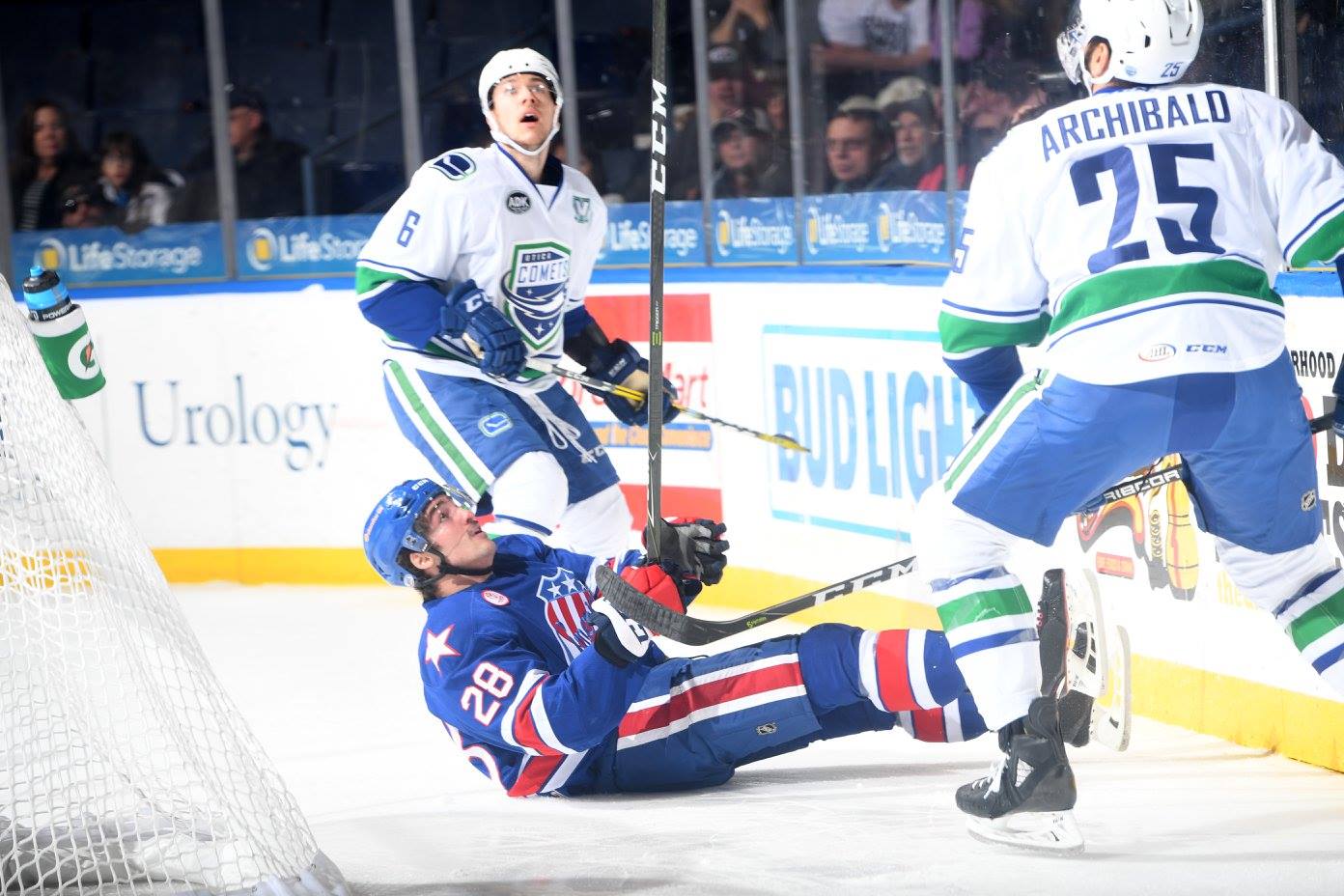 The second half of the season isn’t off to a good start for the Rochester Americans. A blowout loss followed by a shootout loss. They’ve only scored one goal in two games including an overtime session. They also had a penalty shot and three shootout attempts they weren’t able to score in.

The only scoring of regulation time was a Zack MacEwen power play goal at 2:14 of the first period for the Comets and Seth Griffith scoring a power play goal at 14:19 of the second for the Amerks. That isn’t to say the teams didn’t have opportunities.

Seth Griffith was awarded a penalty shot with 56 seconds left in the third period. Talking about that and his chance in the shootout he said, “I tried to make a move in there tight, I lost it. If I get it up there I score. I had an empty net in the shootout too, just have to bare down a little more.”

Griffith added, “I thought we should have had it in the third. I thought our third period was our best period, we just didn’t capitalize.”

Thatcher Demko is an excellent goalie for the Comets. Linus Ullmark is equally as impressive for the Amerks. It’s hard to imagine the NHL in the future without both of them in it.

Chris Taylor talked about being impressed by Ullmark saying,Â “Linus has played great all year. Impress isn’t the word. He gave us another point today, he was great. He has a lot of confidence and cares about how we do.”

Kevin Porter afterwards said, “Throughout the entire game there were a lot of good chances for and against. Linus made some great saves for us and kept us in the game.”

Demko had 27 saves for the Comets and Seth Griffith talked about that saying they gave him too many opportunities where he saw the puck. That doesn’t include at least three pucks that went off the post to the left of Demko.

It’s the second loss in a row for Ullmark but in a life lesson after the game he said, “The sun is always going to come up the next day you know, it’s as easy as that.”

When the sun comes up on Tuesday morning the Amerks will prepare for practice to find the hunger that has been missing from their game lately.

“Teams are hungrier, we have to get hungrier again. We’re not hungry enough,” Chris Taylor said when asked if maybe players have become comfortable. “The last two weeks we haven’t been good enough. We’re supposed to be going upwards not downwards right now.”

An excellent first half of the season allowed the Amerks to chase the top tier teams and for a brief moment move into first place in the division. They still have the best road record in the league. As they have chased teams there have been other teams chasing them and they’ve caught up.

“We’re really good on the road but right now it’s tough even coming home and playing because I don’t know what to expect right now,” Taylor said after the game. “We have to get our locker room back in shape, get culture back to changing. We were at the top and we didn’t handle it very good now we’re back underneath and we have to start chasing those guys again and guys are chasing us.”

The team has earned points for the 29th time in the past 35 games and they haven’t lost back to back games in regulation since October. They’re still in second place in the North Division and one of the top teams in the Eastern Conference because of that stretch. It’s not good enough for a team with expectations.

“We have expectations every time we come into a game and we haven’t met those expectations. That’s my problem and I think that’s their problem (players in the locker room) and we have to figure it out,” Taylor said. “Last two weeks we haven’t been good enough. We’re supposed to be going upwards not downwards and we’re going downwards right now and we got to stop it and be a lot better.”

Kevin Porter talked about points after the game, “This time of the year you want to get get as many points as possible and stay at the top of the standings. It’s nice to get that point but we want the two points there.”

On the same topic of points Ullmark said, “We know for a reason that we want to be in the top and we said to ourselves that we never wanted to lose two straight (in regulation since an early season 3 game losing streak) and kept that as it is right now but it’s not good enough at the moment. We need to win a lot more games especially against division teams.”

“It’s definitely important to get the points but how we got them and how we get them is a different story for me and tonight it was not good,” Taylor said. “Taking steps back and for our lineup right now and what we have we should be a lot better.”

In the write up before the game I had written that the story would be how the team responded to a bad game against Syracuse on Saturday night. While there were scoring chances throughout the game they still lost, gave up a point and were outplayed by a team on paper that they shouldn’t have been outplayed by.

“The biggest thing I look at against a team like Utica is they work hard. A team like Syracuse they work hard. We don’t play well against those guys,” Taylor said. “That bugs me. We gotta be better. We gotta be willing to win those 50/50 battles. Outwork those teams. Outwork them and we have more skill in our lineup than them. They had 6 PTO’s tonight. We had zero. That bugs me.”

Alexander Nylander was a leading scorer in the World Juniors Tournament but hasn’t been able to finish anything in three games. Justin Bailey has been back in the lineup for three games and while he’s skated fast and hard he hasn’t produced any points. Nick Baptiste only has 1G+1A in the last 10 games. Hudson Fasching has 0 points in 3 games after 1G+4A in the previous 6 games. That’s four top prospects on NHL contracts that should be leading the way in almost every game at this point in a season.

Colin Blackwell has missed three games due to an injury and the team is missing him. Taylor talked about needing guys that work hard, are willing to chip pucks behind the defense and wear them down. One of those players is Blackwell. Dalton Smith has been a healthy scratch in four of the last five games but he’s another player that battles down low every shift. That work may get him back into the lineup sooner than later.

One thing that isn’t guaranteed is playing time for anyone. Without hesitation Chris Taylor said nope when asked if he had to play anyone. He added, “They’re judged on right now and they go lower and lower down the lineup. They lose power play minutes, lose penalty kill minutes. At the stage they lost that and they’re just playing a regular shift and if they’re still not playing well they’ll be out of the lineup.”

The coaching staff ran four equal lines of playing time on MondayÂ with extra playing time up for grabs. The team has 15 healthy forwards competing for playing time and little production from many of them. The next five games are on the road for the Amerks with with a record of 4-3-1-1 in the last nine games they’ll be looking to turn things around.

The Amerks are still in second place in the division, third in the conference, fourth overall in the league and they want to make sure they stay that way and get back to chasing the top spots ahead of them.