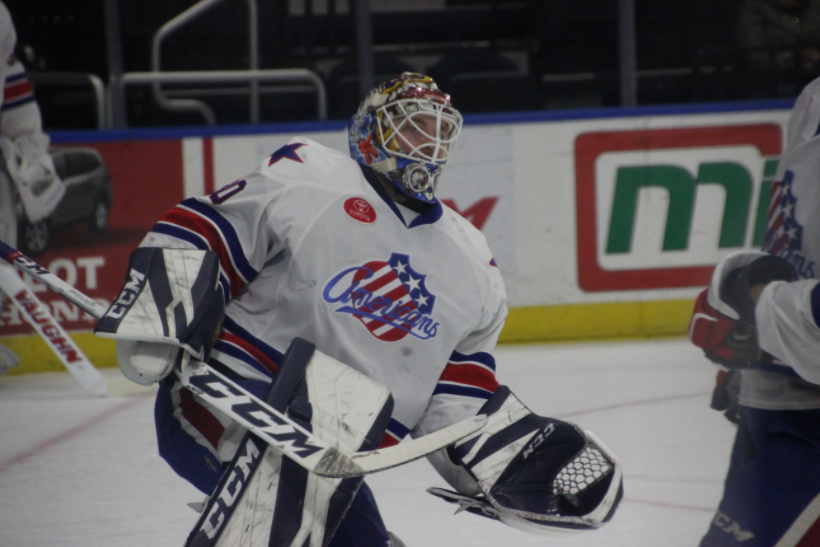 The story for the Monday afternoon home game will be how the Amerks respond to a big loss against the Syracuse Crunch on Saturday night.Â The 1pm game vs the Utica Comets will be the eighth of ten games between the two teams this season. The season series right now has the Comets at an advantage with a 4-1-1-1 record.

The last time Rochester and Utica played was December 16 on the road when Sahir Gill and Nick Baptiste scored two third period goals and CJ Smith scored the game winner in overtime. That was the day after a home loss against Toronto.

A player to watch out for isÂ Reid Boucher who has 17G+16A this season with two of those goals being game winners against Rochester.

I’d expect Linus Ullmark to start for Rochester and Thatcher Demko for Utica.

If you’re not able to be at the game it’ll be televised on MSG, check your local listings!

A 5-2 win on Friday night against the Binghamton Devils started the weekend. Seth Griffith lead the way 1G+2A and Adam Wilcox in net for the win with 18 saves and also an assist on the game winning goal. CJ Smith scored his second goal in three games to put the Amerks on the board first. It was a 1-1 game through the first two periods where it was looking like anyone’s game.

“I just thought the guys stuck with it,” Nathan Paetsch said after his first game back from injury on Friday. “We could have maybe gave up a little when they tied it up. We came out in the 3rd and really responded well and kind of took over the game in the third period.”

Kevin Porter stole the puck just under five minutes into the third and scored after a give and go with Seth Griffith. The Amerks were unstoppable from that point on. Nick Baptiste scored his seventh goal of the season with a quick spin in the face off circle which ended a six game slump. Kyle Criscuolo scored a goal after a seven game drought without one. A second rebound came his way as he rushed into the slot. Sean Malone ended a 16 game dry spell with an assist on the fifth goal of the game scored by Seth Griffith.

After the Friday night win Seth Griffith talked about Syracuse saying, “It’s going to be a test for us.”

The Syracuse Crunch scored better on the test and walked all over the Amerks in a 4-0 win on Saturday night. They were faster, they had less turnovers and were successful in killing off six penalties.

It was only the second regulation loss of the season on the road for the Amerks in 20 games played, still a league low. The other regulation loss was a 5-0 game vs Binghamton on November 18.

Mathieu Joseph received the puck off a face off win and a rifled the puck into the back of the net to score first. If you blinked you missed it. The next three goals were all scored off of odd man rushes. A 3 on 2 followed by a couple of 2 on 1’s. The last two goals were scored within 38 seconds and the game was over at that point.

The Amerks did have some scoring chances. Louis Domingue stopped two opportunities for Alexander Nylander and Dalton Smith shot the puck through the crease with the net open. Syracuse capitalized on their chances and that was the game.

On the fourth goal against and third odd man rush Linus Ullmark showed his frustration by breaking his stick against the net. Ullmark had 28 saves in the game but didn’t get a lot of help. Casey Nelson was a -3 in the game and Brendan Guhle a -2 in his first game back after a brief call up.

1 thought on “Gameday vs Utica; Recap of Friday and Saturday”