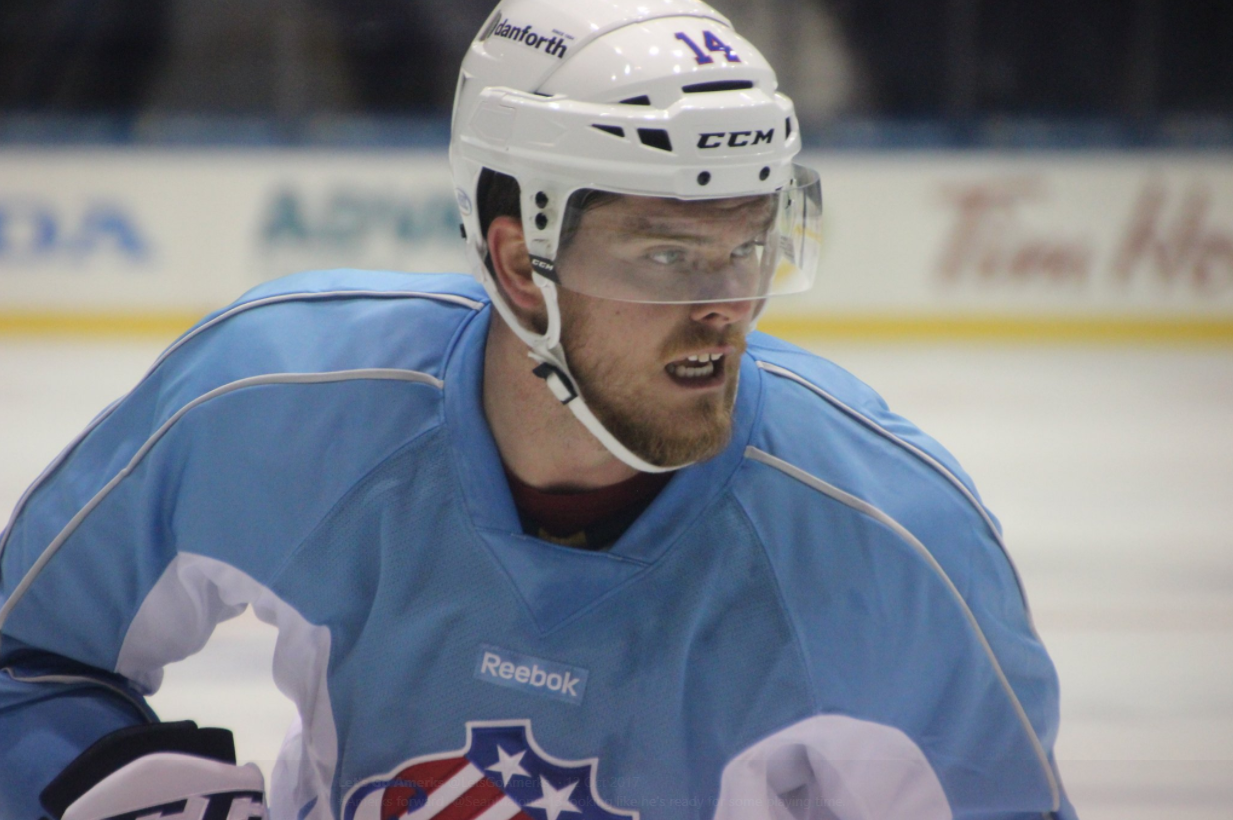 Sean “Mugsy” Malone is a player that we’ve mentioned a lot on Twitter during games but he hasn’t always been a name that gets brought up in stories, which is unfair, he has an impact in almost every game.Â Focus on watching him play – you’ll see him hustle hard on every shift, never coasting.

“He’s been huge for our team,” Amerks captain Kevin Porter said when asked about the role of Malone. “He’s been good on draws, penalty kills, plays in some important situations and plays some important minutes the last few mins of a game.”

After not playing in the first three games of the season Malone hasn’t missed a game since. He’s third in games played at 40, behind only CJ Smith and Sahir Gill who have played in all 43 games for the Amerks so far this season.

Malone was picked in the 6th round by the Buffalo Sabres in the 2013 NHL draft is playing his first professional season after spending four years at Harvard.Â He’s from West Seneca, NY so playing in Rochester close to home has it’s advantages.

“It’s really fun having family close by because I really haven’t had that in a long time,” Malone said. “Being this close to home I can have a dinner or two and be with my family a little bit each week but at the same time I like being here and I like hanging out with the guys on the team and it’s a really fun environment.”

I don’t think an article can be written about this team without the word fun being mentioned.

Every player is asked, why is this Amerks team so good on the road?

He said, “It all starts with having a good locker room and guys that hang out with each other outside of the rink. We feel like a family here and honestly I wasn’t really expecting that coming into pro hockey with having this close a team as we do. I think that definitely plays a role into our success and even when we’re down we’re still pretty positive with each so I think that helps out a lot.”

This Amerks team feels more like family for Malone since he’s close to home and it helps that he’sÂ known four teammates throughout his years of playing hockey.

Recently he’s been playing on a line with Justin Bailey. The two of them know each other from playing on some spring teams together in youth hockey before Malone went to college and Bailey to juniors in Canada.

He was teammates with Kyle Criscuolo and Colin Blackwell while going to Harvard.

Malone also played with Hudson Fasching on the 2012/2013 U.S. National Development Team. Another familiar name was on that National team, Jack Eichel. When Malone played in one game with the Sabres at the end of the 2016/2017 season connected with Eichel to quickly learn a few things.

“The guys seem a lot more talkative on the road,” he added talking about playing on the road. “You just go into new barns, new environments and having a tight knit group. Everyone’s pretty used to it at this point. Sometimes things are stacked against you but we still find a way to come out hard and at least earn a couple points each weekend.”

A quiet leader who was finally asked to step in front of the microphone after an Amerks practice.

“I’ve always been that way growing up, when I lead I like to lead by example and play hard,” Malone said. “I thought I’ve been playing pretty well but wasn’t getting the bounces I wanted to to go in the net. Was nice to finally get a couple and get that monkey off my back.”

He had scored two goals in late November and until this past weekend he hasn’t been on the score sheet under the points column. As Kevin Porter mentioned though, he’s often playing big minutes at the end, whether it’s trying to create some offense to tie a game up or even play a more defensive role to prevent another team from scoring.

“Malone, Cornel, Krause, Ross… I can go on with those guys and how much they mean to our hockey team and what a great job they did in Charlotte with their forecheck and wearing the D down that no one even recognizes,” Chris Taylor said when asked about Malone. “Everybody talks about who scores but it’s the guys that wear the D down and do a lot of the dirty stuff that other guys don’t want to do and those are the guys that we count on. They’re a big part of our hockey team.”

“He’s been great for us and finally got rewarded,” Kevin Porter said.Â “He might have been a little snake bitten. They’re hard working goals. He’s going hard to the net and getting rebounds. They’re not always the prettiest but he’s getting those chances which is good.”

Chris Taylor added, “When they score it’s unbelievable. The bench realizes it and they feed off that. The guys in the dressing room know how much they mean to the team. Nothing more special than seeing Malone and Cornel get some goals on the road and helping our team win.”

There’s more to development than scoring and we’re seeing that with this Amerks team as the coaching staff works to help everyone improve all area’s of a players game. Forwards still want to score though.

“No matter the player you’re always going to view yourself on if you’re scoring or not,” Sean Malone said. “Especially for me I scored a lot last year and then to get put in a role where I’m not scoring a lot sometimes it gets really tough mentally. I know that when I’m put in a good role I will score. I have that confidence in myself to be a good player and that showed this past weekend.”

Talking about the role he played this past weekend Malone said, “I knew I had to earn my way into that spot. Especially at the beginning of the year starting off with an injury. Playing on the fourth line you’re not necessarily leaned on to be scoring goals. I feel like I’m a player that can play anywhere in the lineup and pretty versatile. I was happy for the opportunity and glad to play with good offensive players with Bailey and Nylander. I think that helps a lot. Was happy to be in that spot this weekend.”

Malone has the respect of his coaches and peers and with a couple more big time goals at crucial times, he continues to contribute in a big way on this Amerks team.

The Amerks are on the road this weekend for a game Friday in Toronto and Saturday in Belleville! We’ll have post game recaps and you can also follow us on Twitter at via @LetsGoAmerks for updates during games! 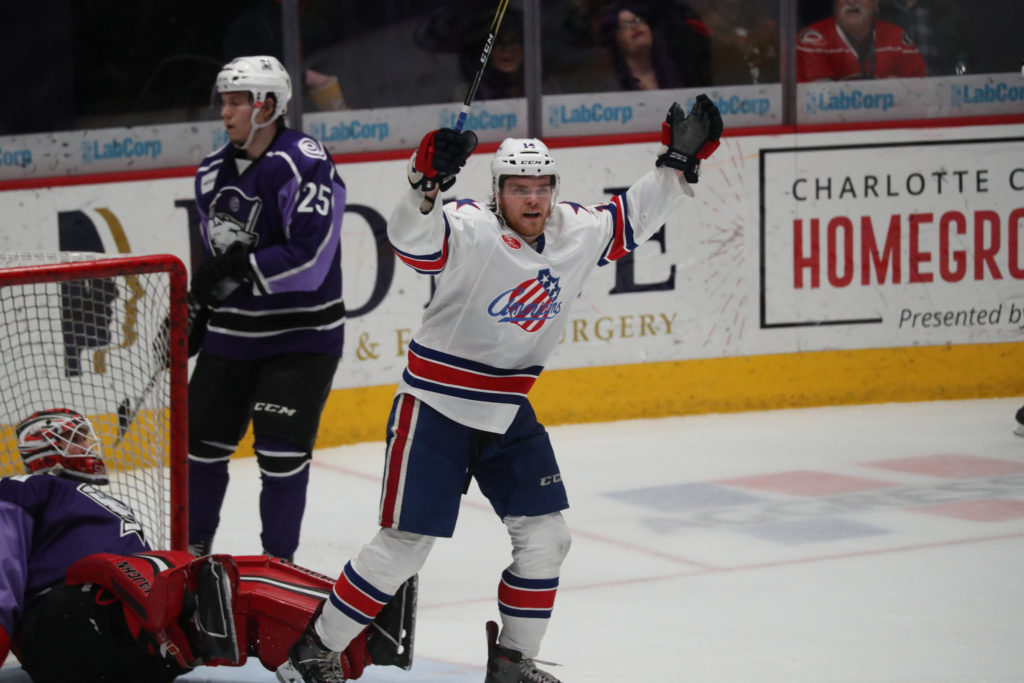