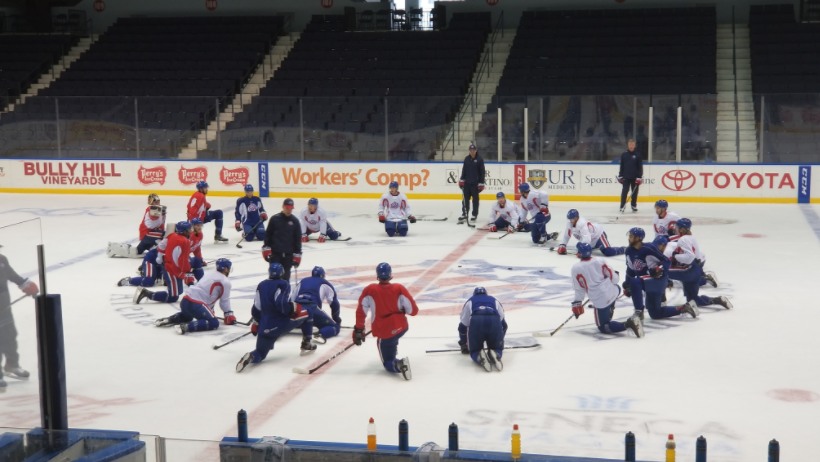 The Rochester Americans finish their lengthy set of road games this weekend on the road tonight in Toronto and Saturday night in Belleville.

When the Amerks first played against Toronto in mid December they talked about the game being a test to see where they were at and how they matched up. They’ve played 16 games since and now consider it another game.

“I think we’re just playing our game now,” Kevin Porter said. “We’ve had a couple of good games against them. We’ve played against Syracuse, Utica and they’re all really good teams in our division so we need to worry about us, come out, play our game and we should be ok.”

Chris Taylor said, “We went into Toronto and played a really good game against them the last time so we know what we can do against them and we have to make sure to bring that.”

After these two games the players will have four days off for the All-Star break with a handful of players (minus CJ Smith and Linus Ullmark who are in the All-Star game) taking off for warm weather trips. The challenge is to focus on the games ahead.

“We had a meeting last week,” Taylor said. “We wanted to make sure we’re taking care of business. These two games are very important. Division games that we need to play well in and on the road. We haven’t played the best of our hockey that I think we can. We’ve played good enough to get some points but I think we have better in us so we have to bring everything we got these last two games.”

Six players have changed rosters over the last week and a half, two joined the injured list this week and it hasn’t phased anyone in regards to the Amerks lineup. In previous seasons it would’ve raised some red flags and become a hot topic of conversation in after practice interviews. It wasn’t even thought of or brought up this week.

For the last 10 years any time three ECHL players were added to the roster there was an immediate concern but that isn’t the case here.

Justin Danforth has been a leading scorer in the ECHL with 22G+22A in 39 games for the Cincinnati Cyclones. With the injury to Garret Ross the Amerks wanted an extra player to take on the road trip and it was a perfect opportunity for Danforth. Eric Knodel and Arvin Atwal have each seen games with the Amerks already and shown they can fit right in.

“We’ll see. Right now it’s probable,” is what Chris Taylor said when asked if Danforth will play. “He’s played really well down there. Again, just like our guys have played really well here and they haven’t gotten a chance up in Buffalo. It’s hard, you have to push guys out and guys are playing well here right now for us here. I liked what i saw in practice. He brought some energy, a good skater so we’ll have to wait and see.”

Talked to Danforth about the little Cincinnati invasion and he said, “It’s nice having these guys here as well so it makes it a little easier coming into the dressing room when you know a couple of guys. I went to camp with a lot of the guys anyways but just having Knodel and Arvin here it makes it a lot easier to transition.”

Danforth was surprised by the timing of the call up without any apparent injuries but was excited to join the team for practice on Thursday before hopping on the bus for Toronto. He got the call around 3pm on Wednesday and was on a flight out of Cincinnati by 5:30pm.

He wasn’t worried about having to be noticed, just had to be patient. He said, “All I can do down there is work hard and develop on the things the coaches up here wanted me to work on. I know that they’re noticing things on the Coast (ECHL) as well so I just had to keep working hard and things would come.”

“Both teams are doing great, I know Rochester is doing awesome, one of the top teams in the league and back in Cincinnati we have a really good team down there as well so it makes the transition a little easier,” Danforth said when talking about easing into a winning situation. “Doesn’t matter if the team is winning or losing. You just have to come in and do what you can to help the team win games and bring what you can to the table.”

Chances are pretty good he’ll play based on his resume. During practice on Thursday morning he rotated on a line with Dalton Smith, Adam Krause and Eric Cornel.

Eric Knodel has stepped right into a defensive role. Arvin Atwal has only played in two games for the Amerks this season but has shown speed a toughness and the ability to play in the American League. Justin Danforth is a leading scorer in the ECHL and in five games with the Amerks last season there’s no doubt he’ll be able to step in and play a role.

In case you’ve missed them, here’s some recent stories that we’ve lead with this week:

Sean Malone Knocked the Monkey off His Back

Ullmark is Playing for the Cup; CJ Smith Ends his Slump