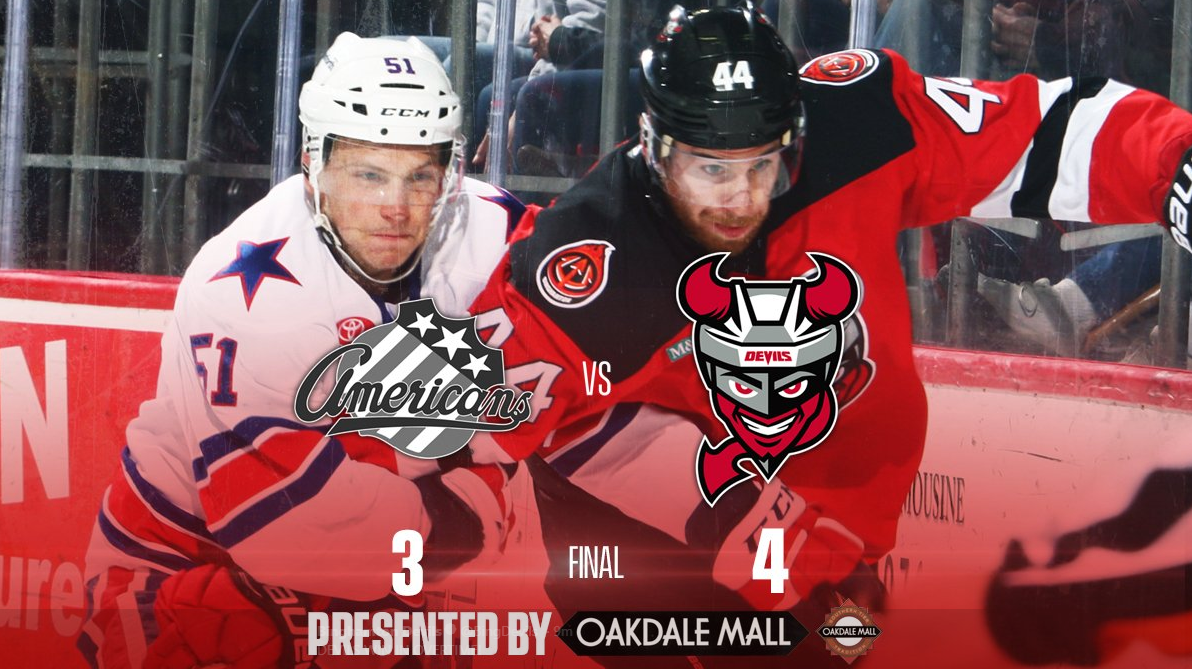 The Amerks found a way to get a point on Saturday night in Binghamton battling back from two goals down but lost 34 seconds into the overtime session.

Based on the pace of play if someone didn’t know anything about the two teams they would’ve thought these teams were equals. Binghamton Devils are in last place overall in the league, Amerks are sitting at fifth overall. The Devils were the better team for a majority of the game including the last 90 seconds when they were hungry to win.

Kevin Porter scored a power play goal at 18:38 of the first period finding a loose puck in front of the net.

GOAL!!! #CaptainPorts puts in the loose puck on the power play. #Amerks up 1-0. pic.twitter.com/uvWx7wF97G

Adam Wilcox started in net which was expected and finished with 31 saves. Jonas Johansson was called up from Cincinnati to back him up. Linus Ullmark took a hard shot to the left shoulder/collar bone area on Friday night and didn’t make the trip to Binghamton.

The Devils didn’t waste any time tying the game up at 5:26 in the second period.Â Blake Pietila skated the puck in scored bar down on Wilcox.

And they score. Pietila puts it in the net. 1-1 game. pic.twitter.com/eJLMb3GiQi

Viktor Loov scored on the power play at 9:09 of the second to put the Devils up 2-1. Zach Redmond was in the box for slashing and Loov found the loose puck.

Devils score a PP goal and they go up 2-1. Viktor Loov puts this one in the net. pic.twitter.com/boMzx73x6J

The Devils controlled the pace of play in the second period and lead 9-6 in shots. Many Amerks shots were either blocked, wide or went over the net. The six shots didn’t generate any of the coveted second or third opportunities.

Blake Speers found a loose puck in the paint to give the Devils a 3-1 lead at 4:28 of the third period.

Devils take a 3-1 lead. Another loose puck down low and Blake Speers found it and scored. pic.twitter.com/4BkB8WoLkg

Matt Tennyson scored his first goal as a Rochester American to get the Amerks within one at 8:54 of the third period. Alexander Nylander was playing the opposite side on the blue line for the power play chance, kept the puck in the zone, Fedun settled it and setup the shot for Tennyson.

A much better third period for the Amerks and Sahir Gill scored his 13th of the season to tie the game 3-3 with 5:06 left in the third period. Hudson Fasching lead the rush, took the initial shot and Gill found the rebound.

Sahir Gill scores his 13th of the season and ties the game 3-3!! 5:06 left in the third. #Amerks come back again. pic.twitter.com/40WND0IeNP

Another game where the Amerks battled back from behind to at least earn a point but a top team needs a regulation win against a last place team. This was the 20th game out of 47 this season that has gone into extra time for the Amerks.

It only took 34 seconds into overtime for the Devils to win. Tim Kennedy took the puck to the net, Wilcox made the initial save and Jacob MacDonald found the rebound.

Binghamton finished the game with a 35-30 shot advantage and just in the overall play. They scored on those often talked about second and third opportunities where as the Mackenzie Blackwood gave up very few of those.

The Amerks played with seven defensemen and 11 forwards. Seth Griffith did not play for reasons unknown as of writing this. Devante Stephens was in the lineup but barely played so it was more like six on defense and 11 forwards.

Sean Malone was strong the whole game leading the team with five shots on net and clearly leading in ice time as well.

The team played well against the top team Toronto Marlies one night and struggled against the 30th place team the next.

Nick Baptiste was assigned back to the Amerks on Saturday afternoon but did not make the trip to Binghamton. He stayed in Buffalo and will join Rochester assuming the Sabres end the night healthy.

The next game is Wednesday at home vs theÂ Belleville Senators.

Big Goal for Gionta with a Big Crowd