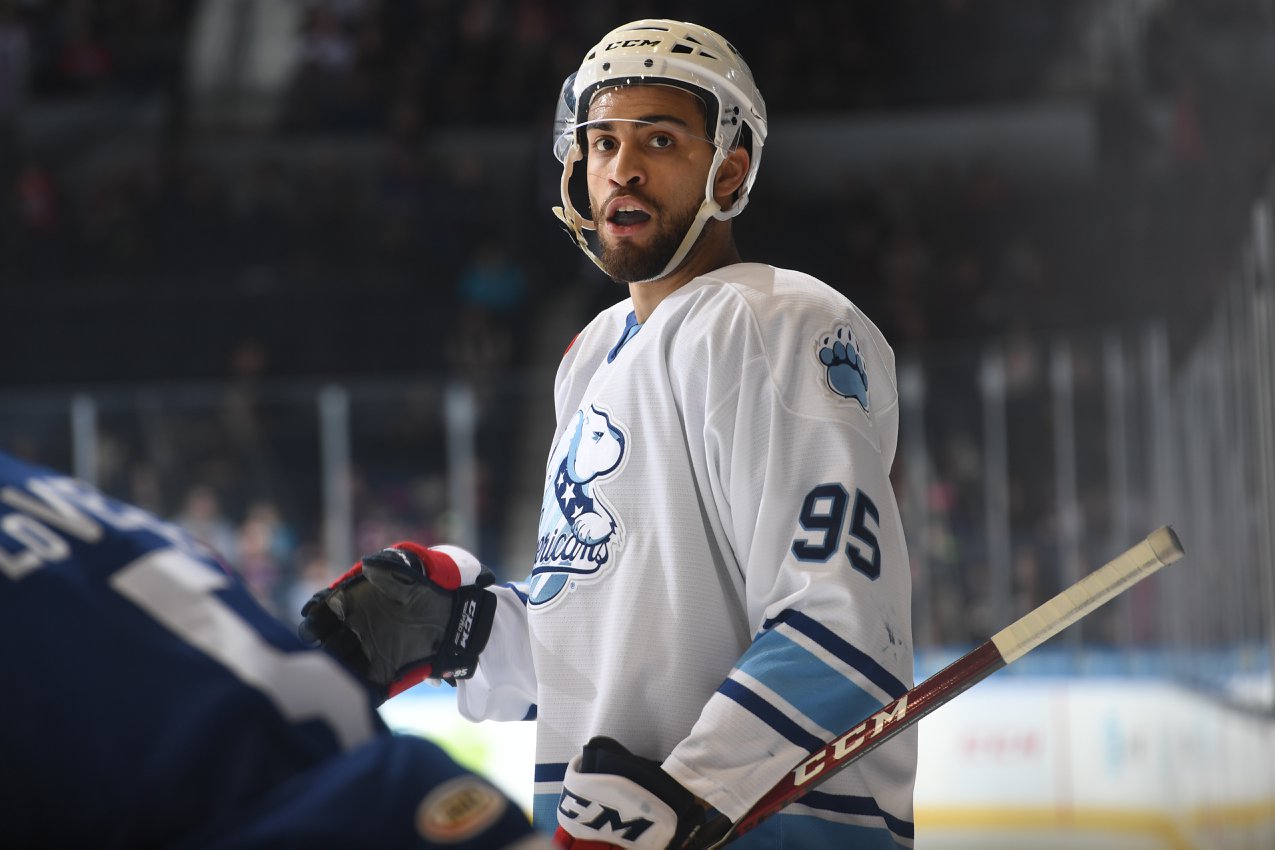 The headline had the potential to say Justin Bailey shines in Amerks win but just like nine of the last 10 games the Amerks lose again.

It’s the same thing game after game, the team does’t play a full 60 minutes and it results in a loss. In the 56th game of the season they at least came close to playing just over 55 minutes. It’s progress, right? Not really. The Amerks need wins, not words.

It was a 1-1 game after the first period and the Amerks had a 3-2 lead after two periods. Typically there’d be a sense of confidence in the air but the fans within Blue Cross Arena knows better. Rochester was able to hold off the Marlies for the first 15 minutes of the third period until the flood gates opened up. Toronto won 5-3.

“That’s been our best game for a long time and if not maybe our best game of the year,” Toronto Marlies forward Chris Mueller said after the game.

No one was happy within the Rochester Americans dressing room but if the league leading Toronto Marlies said that was their best game and the Amerks lead the game for 55 minutes what does that say?

“They’re an experienced team. They’ve been together for a couple of years now and that’s why they’re in first,” Chris Taylor said after the game. “We have to keep learning and keep getting better. It’s a tough way to end it and the guys are pretty down right now.”

Credit to the players for separating the game from the fan experience as they went back out to the ice after the game to give the jerseys off their backs with genuine smiles to those who bid on them.

“I thought we played well for about 55 minutes and that cost us the game so we have to get that figured out still,” Kevin Porter said after the game. “That’s a big problem for us.”

Porter added, “A couple of mistakes late in the game especially by my line. We gave one up to them to tie the game and gave them a lot of momentum so that one is on me and my line.”

“We shouldn’t be satisfied, shouldn’t be happy at all. This ain’t good enough ya know, we can’t bring this into the playoffs and we can’t keep playing like this,” Linus Ullmark said in the locker room. “We have to do the right things at the right time. Play a 60 minute game and just go from there. It’s as easy at that.”

“Give them any opportunity, any little chance, any little bit of life and they execute and that’s what they did,” Justin Bailey said after the game talking about Toronto.

Bailey hadn’t scored a goal since opening night of the season and played his best game of the season on Friday night. He was able to use his blazing breakout speed in the first two minutes of the second period to give the Amerks a 2-1 lead. Redmond sent a puck off the boards from the goal line to Bailey breaking out at center ice and the rest is history.

Just over 11 minutes later Bailey fired a hard shot off the back boards behind the net, it went to Alexander Nylander on the goal line who fired the puck into the back of the net and it was a 3-1 game.

Those weren’t the only two plays though. Bailey spent a lot of time battling for pucks in the Marlies end and also had three shots on net. He was all over the ice in a confident way.

“One of his best games I’ve seen in a long time. It’s refreshing to see that. We need him. He’s a big part of this team and our organization,” Chris Taylor said after the game talking about Bailey. “It’s good to see that he had some jump tonight but he has to carry it on tomorrow. That’s the biggest thing for me, how he responds tomorrow.”

Two goals thanks to speed and one goal off a home bounce. Not too bad at first glance until you get into the details. Toronto had a 36-17 advantage in shots but wasn’t too concerning for Chris Taylor. Toronto is skilled at blocking a lot of shots that otherwise would’ve found their way to the front of the net. If pucks aren’t getting to the net you won’t have as many chances to score. Seems pretty simple.

In the last four games the Amerks have been out shot 133-79.

Calle Rosen scored his first of the season on the power play from the point with Nylander in the box serving a lazy two minute hooking penalty.

Zach Redmond made an attempt to skate the puck out of the zone but turned the puck over.Â Trevor Moore took the initial shot, it went off the skate of Stuart Percy and Chris Mueller buried the second chance to get the Marlies within one.

A defensive zone mistake by Kevin Porter resulted in another turnover and Chris Mueller tied the game up at with 4:13 left to play in the third period.

“We made some bad decisions at the wrong time,” Linus Ullmark said after the game.

Early in the third period a call went Rochester’s way when a goal was waived off by the ref. The puck was sitting under Ullmark and as he looked for it he pushed it into the net. By that point the play was already blown dead.

The 4-3 go ahead goal by Kerby Ruchel didn’t have the same outcome and Ullmark wasn’t happy about it saying, “If he’s the guy behind the net he should call loose puck, usually what they do. Sadly we didn’t have that communication between me and the ref today and that cost us the game sadly.”

With eight seconds left in the game Toronto scored an empty net goal to end it.

Taylor was asked if this was a game where the team was afraid to lose or if it was mistakes and he said, “These guys were up and ready to go, it was just a couple of mistakes.”

The same two teams face off again Saturday afternoon at 4pm in Toronto.

“Can’t wait to go out there… I want to say a couple of bad things but I can’t do it,” Linus Ullmark said looking to the game on Saturday. “One of the teams I really want to win against. They’re a top team, you want to win against the top teams.”

Ullmark added, “It’s not one guys fault, it’s not two guys fault. Everybody has to look into themselves and see what they did wrong and we have to fix this. We have to stick together as a group and just think about a new day tomorrow.”

Back to the headline on Friday morning, the Amerks need wins, not words.