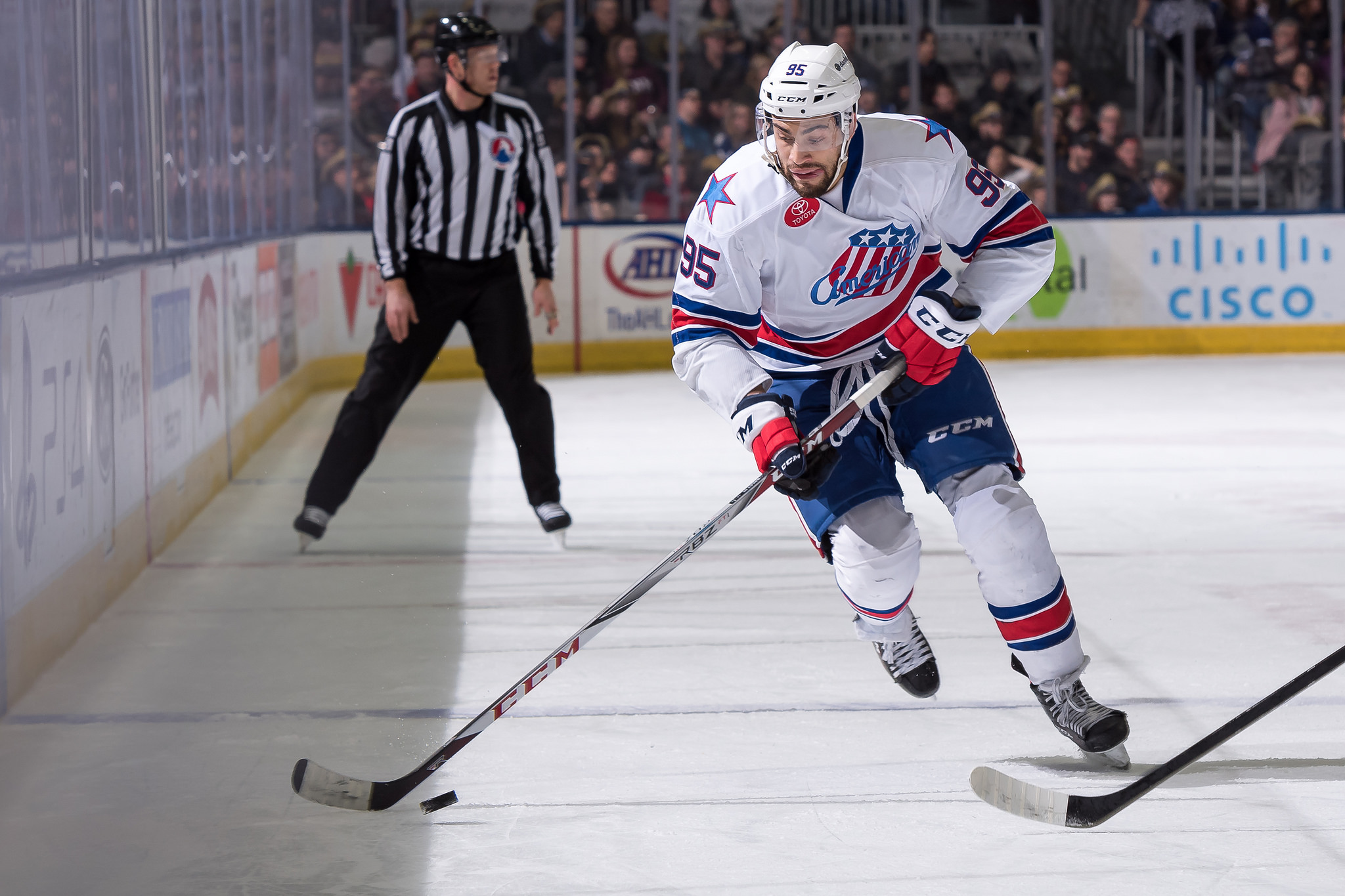 Justin Bailey responded on Saturday with another solid game and this time it wasn’t overshadowed by an Amerks loss. Two goals within the last 79 seconds of the game insured a 7-4 win over the league leading Toronto Marlies.

Seth Griffith opened the scoring at 4:47 of the second period but from that point the Marlies took over to build a 3-1 lead heading into the third period.

Hopes and dreams. That was the feeling heading into the last 20 minutes of the game.

Kevin Porter drew a crowd in the Marlies zone, dropped the puck off to Stuart Percy who picked his shot to make it a 3-2 game. It wouldn’t last long.

Less than three minutes laterÂ Mason Marchment scored for the Marlies and it was a two goal game again. Down 4-2 at 8:45 of the third period the scoreboard was pushing the game in the Marlies favor.

The turning point in the game occurred with 10:23 left in the third period when Seth Griffith got tied up withÂ Miro Aaltonen along the boards and Griffith slammed him down to the ice. No penalty was called. Somehow. Aaltonen left the game injured and didn’t return. Toronto was scrambling at that point and thrown off their game.

This was the turning point in the game. Miro Aaltonen left the game injured after Seth Griffith slammed him down. Amerks ran away with the game. pic.twitter.com/2w1AsRmaIX

“We went from a situation where weâ€™re probably deserving to be on the power play and instead we lose one of our top players and that causes some disruption for us,” Marlies head coach Sheldon Keefe said after the game to media.

Colin Blackwell won a battle along the boards, got the puck to Kyle Criscuolo who let a shot go from the point and Blackwell redirected it into the net. One goal game.

Less than three minutes later Alexander Nylander had a shot blocked, Sean Malone picked it up and roofed it to the back of the net. Game was tied!

On Friday night the Amerks made mistakes late in the game that Toronto was able to score on and turn the game around for the win. Saturday in Toronto it wasn’t so much mistakes by Toronto as it was Rochester working hard and taking ownership of the game.

Justin Bailey played his best game of the season on Friday but it was overshadowed by the loss. Chris Taylor said after the game how he responded on Saturday would tell the story. Bailey responded with another great game.

Toronto was only down a goal and you can never count out a top team in the league. They pulled Calvin Pickard for the extra attacker but Justin Bailey wasn’t going to allow anything to happen. He cleared the Amerks zone and sent the puck into an empty net with 1:19 left. Two goal lead.

He wasn’t finished. Bailey could’ve easily killed the remaining seconds on the clock but took off down the ice and scored on Pickard with under two seconds left in the game. Bailey lead the Amerks with six shots on net in the game.

Amerks won 7-4. Adam Wilcox made 24 saves for his ninth win of the season.

An incredible comeback during the teams worst stretch of the season. The Marlies were down a player and playing on their heals and the Amerks continued to push.

Was it a perfect game? No. There were some mistakes that cost the Amerks. Toronto was without a top forward for half of the third period but it wasn’t like the Wilkes-Barre/Scranton game where they were down three defensemen. The difference was the Amerks played from start to finish and it resulted in a much needed regulation win.

Sheldon Keefe also said, “A little taste of our own medicine here today in terms of us being able to do that to them yesterday.”

Could this be what turns out a long unpleasant stretch of games? We’ll find out Wednesday when the Amerks host Bridgeport before they play in Toronto again next Saturday.

Multi-point nights were had byÂ Justin BaileyÂ (2+0),Â Colin BlackwellÂ (1+1),Â Sahir GillÂ (0+2) and former MarlieÂ Stuart PercyÂ (1+1), while Amerks captainÂ Kevin PorterÂ tallied his second three-point night (2+1) of the season. For the second game in a row against his former squad, former AHL All-StarÂ Seth GriffithÂ opened up scoring on the night, andÂ Adam WilcoxÂ stopped 24 of 28 shots he faced in his first appearance against Toronto this season to improve to 9-4-6.

GOAL!!!! Blackwell to Griffith and the #Amerks are up 1-0 pic.twitter.com/P4yjSZzMiX

And within no time the Marlies tie it up. Ben Smith redirects this one past Wilcox. pic.twitter.com/XS2CqlfjRs

Miro Aaltonen scores on a breakaway. Marlies lead 2-1. Guhle was at the far end of the ice and almost caught up. pic.twitter.com/6SEVqgBh18

This is where we go back to hoping for a comeback. Amerks left scrambling in front of the net, Marlies score and go ahead 3-1. pic.twitter.com/17FDCLhZ4G

GOAL!! Kevin Porter attracts a crowd, drops off for Stuart Percy who picks his spot and Amerks close the gap to one. pic.twitter.com/Z7sWPUjShN

Was close for a short time. Mason Marchment buries a rebound and the #Marlies take a 4-2 lead. pic.twitter.com/nIpEWRTSwC

GOAL!! Blackwell creates a turnover along the boards, Criscuolo shoots, Blackwell redirects it in. Amerks are back within 1. pic.twitter.com/fFzMjngkeA

Sean Malone picked up a blocked shot and roofed it to tie the game 4-4! #Amerks pic.twitter.com/3lKda4qLfV

Kevin Porter picked up a loose puck and put the #Amerks ahead 5-4!! pic.twitter.com/lvCF660crD

Justin Bailey chipped in the puck to an empty net for a 6-4 lead to slow down a Marlies late game push. pic.twitter.com/uofmPl31wT