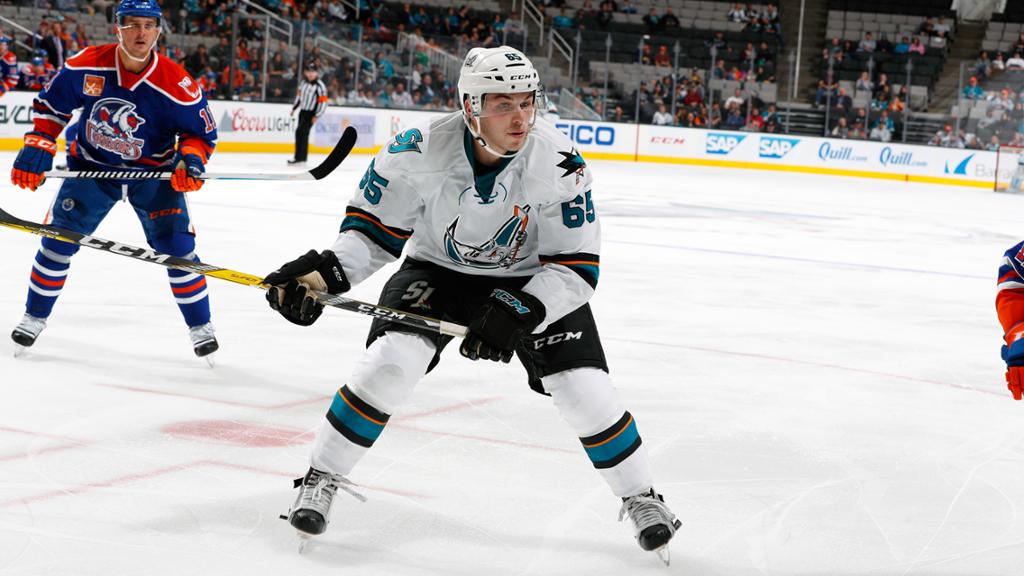 The NHL trade deadline is in the past and as the dust has settled the Rochester Americans have improved with three additional players that weren’t on the roster at the start of the day, one of which will immediately available. Danny O’Regan will join the Amerks this week and Nick Baptiste and Casey Nelson were assigned on paper to be eligible for the playoffs.

Danny O’Regan was acquired by the Buffalo Sabres from the San Jose Sharks in the trade for Evander Kane and he’ll be immediately assigned to the Rochester Americans. O’Regan was also named the 2016-17 AHL Rookie of the Year as the leagues rookie leader in scoring (58GP, 21+33=54PTS, +7, 9 PPG, 5 GWG) with San Jose Barracuda. This season with the Barracude in 31 games he has 7G+18A.

He’s listed as a center so it’ll be interesting to see where he fits into the lineup. The top two right now are Kevin Porter and Kyle Criscuolo. It’s possible he moves into the third slot and Sean Malone slides down one to the fourth. O’Regan will also bring some Calder Cup playoff experience. The San Jose Barracuda lost in the third round of the playoffs last season. In 15 games he had 4G+3A.

Jason Botterill said, “We’re very impressed with his skill level and certainly his hockey sense. You look at last year and his success in the American Hockey League. We think he’s ready to make the jump. We’ve tried to build to Rochester up to have a winning environment down there, he’ll certainly help them down the run.”

For a closer look at O’Regan overall check out this article on Die By the Blade.

Nick Baptiste and Casey Nelson are the other two players referred to above.Â For players to be eligible for the AHL playoffs they had to be assigned to their AHL team before the 3pm deadline. Baptiste and Nelson were paper transactions meaning they were assigned to Rochester and then right back to Buffalo. The Sabres finish their season on April 7 and the Amerks last regular season game is April 14 so we’ll see them back before the start of the playoffs.

Baptiste has 7G+11A in 36 games with the Amerks this season. Those numbers aren’t all of that impressive on paper but he’s improved as the season has gone along playing a consistent game which earned him the call up to the Buffalo Sabres.

Casey Nelson has 2G+9A in 37 games but the more impressive stat (which isn’t used much but in the AHL we don’t have much to go on) is a +11. Since being called up Nelson has missed 16 Amerks games and that still has him second on the team. Nelson is strong defensively and also helped Brendan Guhle’s early season success. Having those two paired back up on defense will make for a dangerous playoff pairing.

Do these moves really improve the Rochester Americans? Sort of. O’Regan will add some offense and success with a likely eagerness to jump right into the Sabres lineup with his former college teammates Jack Eichel and Evan Rodrigues.

Nick Baptiste and Casey Nelson were a guaranteed move and will improve the Amerks for the playoffs. In years to come this could be seen as the Amerks adding NHL players at the deadline that carried them deep into the playoffs.

The biggest struggle for the Amerks has been inconsistent scoring and their inability to play a full 60 minute game. Whether that’s a lack of effort or talent will remain the biggest question that carries the team through the end of the season.

Around the North Division:

The moves may not be finished yet for any of these teams. The AHL trade/loan deadline is Monday March 5, 2018 at 3pm. Other teams could still become stronger or even weaker. There’s also the ability to sign ATO’s, PTO’s, college players and anyone else out there that needs a place to play.

One example of a player we could still see in Rochester is Casey Mittelstadt. If he decides to end his college career and turn pro we’ll likely see him in an Amerks uniform.

For a current look at the Amerks roster check out: http://www.lga585.com/roster/

And if you aren’t following us on Twitter you should – twitter.com/LetsGoAmerks

Here’s a recap video from the Buffalo Sabres:

Today’s #Sabres Now
🔹 How the San Jose trade went down
🔹 A boost for @AmerksHockey
🔹 What to expect going forward pic.twitter.com/Ie23J4QcDF