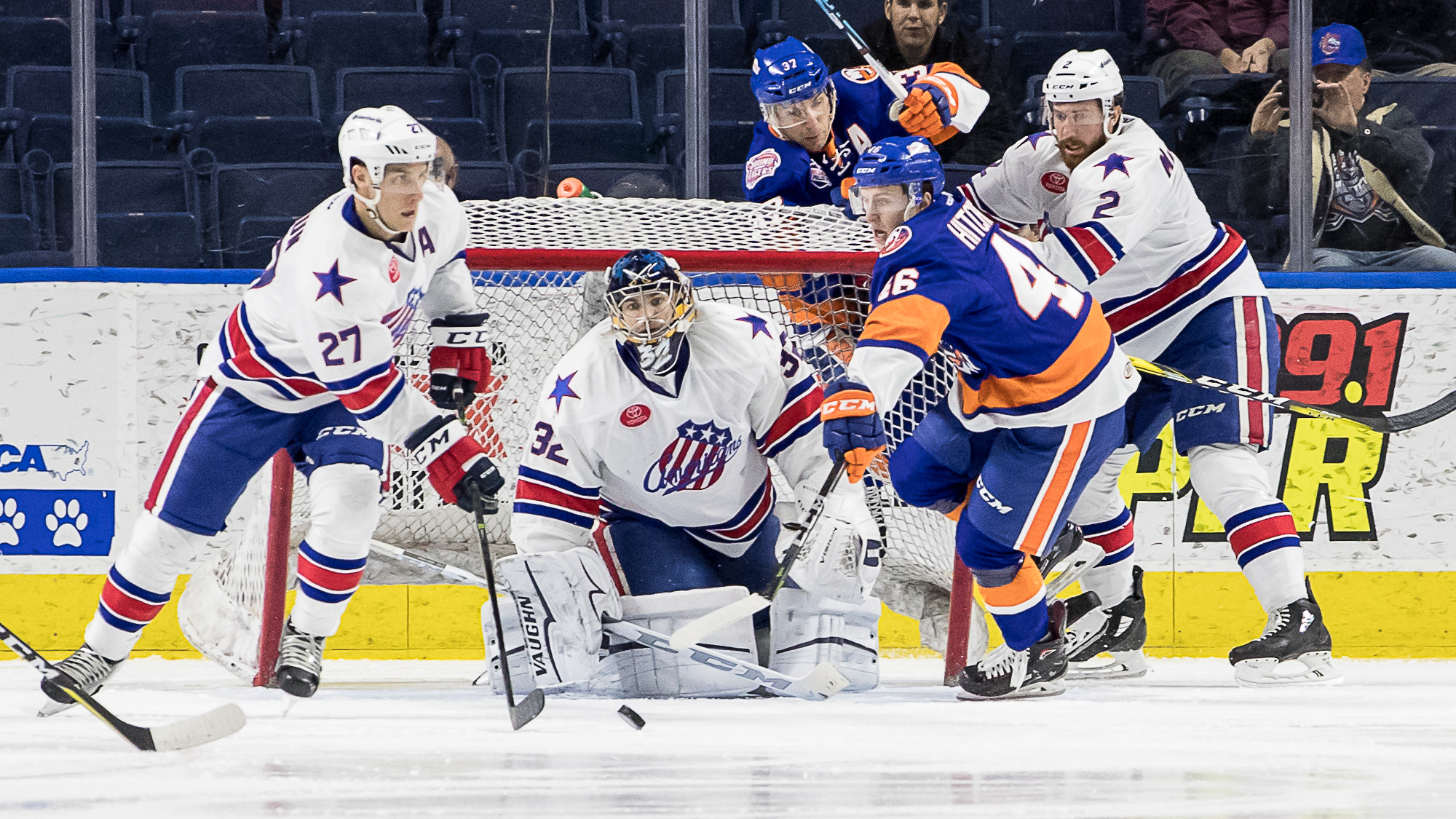 The Rochester Americans came together as a team on Thursday night giving up six straight goals to the Bridgeport Sound Tigers and blowing a four goal lead.

That’s right, the Amerks had a 4-0 lead at one point in the game. They also had a 16-6 advantage in shots at the end of the first period. It took nine minutes for Bridgeport to get their first shot on goal.

This was the second straight game the Sound Tigers were down by four goals and came back to win. On Sunday they won 5-4 over theÂ Springfield Thunderbirds. Credit to them for not giving up.

It’d be easy to make excuses about the lineup and line pairings but it’s just that, an excuse. No team should ever give up six straight goals after being up by four.

The first four goals scored by Sean Malone, Stuart Percy, Hudson Fasching and Danny O’Regan were all quality goals. Malone scored by creating a play in front of the net with Fasching. Percy blasted a slap shot. Fasching scored off a pass from Malone. Danny O’Regan walked the puck in, picked his spot and sniped it.

Individual efforts wiped out by an ugly team loss.

Kristers Gudlevskis was chased from the net after Danny O’Regan scored the fourth goal for the Amerks.Â Eamon McAdam was perfect with 19 saves.

Ryan Bourque scored a power play goal at 3:29 of the second period tipping in a shot by Kyle Burroughs. The Sound Tigers cycled the puck, screened Wilcox and started their comeback.

Travis St. Denis scored his first of three goals in the game at 12:42 of the second period. Nathan Paetsch stepped up and stopped his man at the blue line, Matt Tennyson followed the puck carrier, Steve Bernier, but Bernier was still able to send a pass to the slot. Danny O’Regan attempted to make a play on the stick of St. Denis in the slot but he tipped it past Wilcox.

The Amerks were still in the game at that point and continued to be for the rest of the second period. They were moving the puck and playing a physical game but were unable to get quality shots or get McAdam out of position.

The comeback continued when Travis St. Denis scored his second of the game 22 seconds into a power play at 3:53 of the third period. Justin Danforth was in the box for holding.

As the game was being played at this point it felt like 26 other games this season, it’d be tied up and go into overtime. Bridgeport was out to win this one.

Bridgeport was able to do what the Amerks couldn’t, cycle the puck to create a scoring chance. Travis St. Denis scored his third of the game from the top of the face off circle over the left shoulder of Wilcox. Nylander tried to skate in front of St. Denis and may have taken away any vision on the shot for Wilcox.

With 5:20 left in the third Justin Danforth and Garret Ross didn’t hesitate playing past the whistle and creating a little mix up in front of the Bridgeport net. It wasn’t enough.

Steve Bernier scored the game winning goal with 4:17 left in the third period redirecting a shot from in front of the net.

After they were down by four goals the Sound Tigers changed their goalie, tightened up their game and scored more goals than the Amerks. They passed the puck and created better scoring chances.

The Amerks spent a lot of time carrying the puck in, shooting it and then turning back to the defensive zone.

Eamon McAdam had it pretty easy back stopping the comeback and earning the win. Adam Wilcox finished the game with 21 saves.

Before the game started the Amerks wereÂ 19-2-2-1 when leading after two periods. The Sound Tigers wereÂ 2-19-2-0 when trailing after two. A great comeback for team and a throwaway game for another.

CJ Smith had been out since February 11 and missed 12 games due to an ankle injury. He had four shots in the game but was ineffective for much of it.

Garret Ross had been out since January 21 and missed 19 games with a back injury. He was involved in one scrum in front of the Sound Tigers net in the third period.

The only player on the Amerks injured list is Barry Goers who’s out indefinitely and unlikely to play this season.