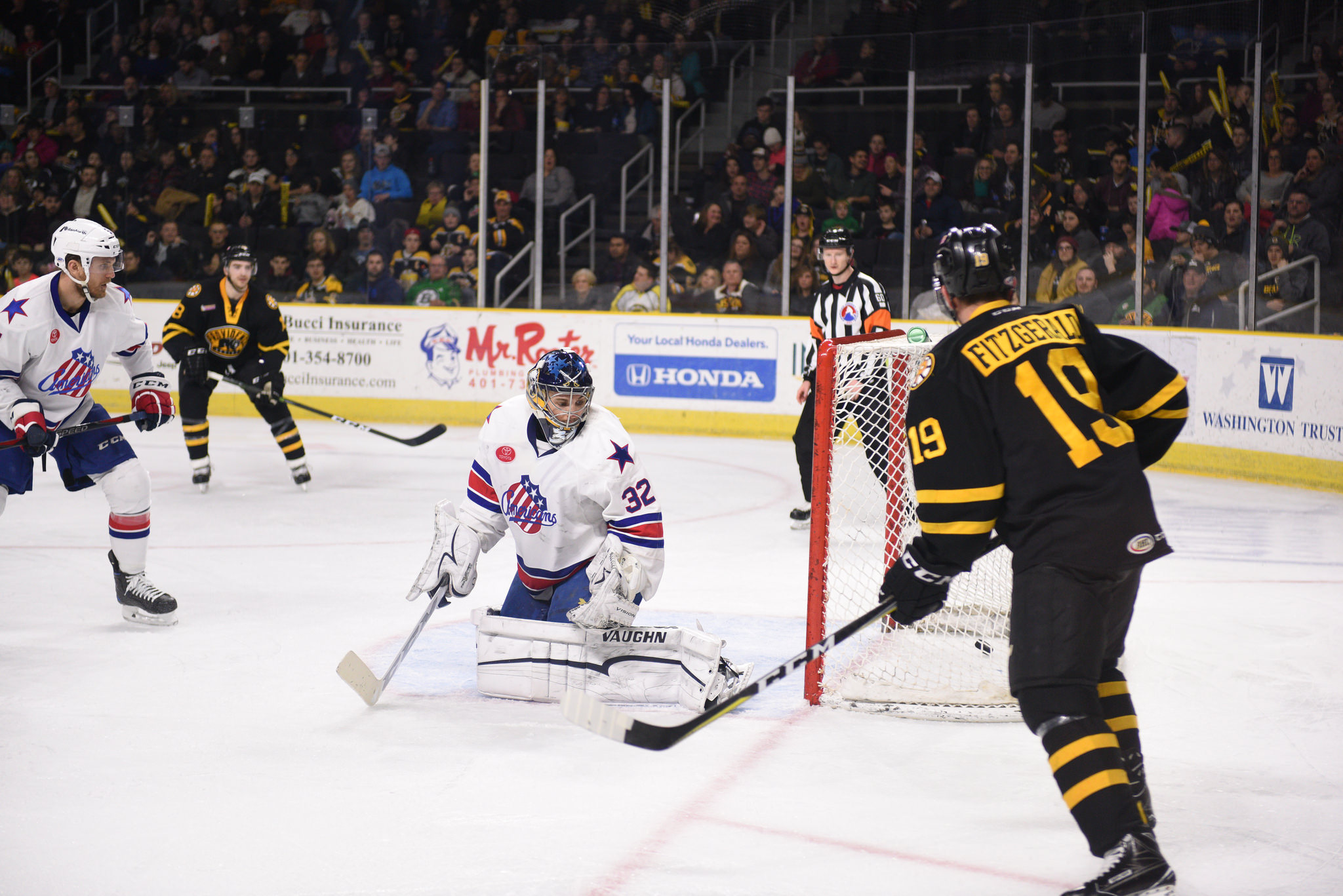 Austin Czarnik scored three goals for the Providence Bruins to lead them to a 5-3 win on Friday night over the Rochester Americans. Travis St. Denis had the honors on Thursday night for Bridgeport.

One more game on the road trip, no pressure on Hartford to follow up and get another.

Adam Wilcox left the game less than five minutes into the third period after appearing to twist his right knee. He made a quick to turn to get into the play and immediately went down to the ice. Before leaving the game he had given up three goals on 38 shots against.

Providence finished the game with 49 shots (17+18+14). There was only two skaters for the Bruins that didn’t get at least a shot. Josh Hennessy had six, Austin Czarnik had five (three of which he scored on).

Jonas Johansson was welcomed into his first AHL game of the season allowing a goal on the first shot he faced.

Was the loss a goaltending problem? It’s tough to win hockey games giving up 49 shots.

Adam Krause scored 73 seconds into the game tipping in a shot by Zach Redmond.

Alexander Nylander scored at 5:42 of the second tapping the puck in from the side of the net off, assists to Hudson Fasching and Colin Blackwell for leading that rush.

Danny O’Regan scored his fourth goal in six games for the Amerks to tie the game at three but just over two minutes later Providence took the lead.

The Amerks were down by a goal and had some chances. Nylander received a pass from CJ Smith and had a wide open net but couldn’t pull off the shot fast enough. Would’ve been a beauty if he scored. Zach Redmond fired the puck in from the red line and it took an odd bounce but a quick reaction by Zane MacIntyre and he was able to make the save.

A turnover by Kevin Porter with an empty net allowed Austin Czarnik to score his third of the game with 53 seconds left and game over.

Rochester has the second best penalty kill in the league but for the second straight game they gave up two goals, enough for an opposing team to win a game.

Thursday’s game was a team loss after being up 4-0.

Friday night was just giving up too many shots, not able to score on a golden opportunity and a poorly timed turnover. So, another team loss.

Teams are scoring on the Amerks with shots from around the ice. The Amerks are relying on scoring the dirty goals down low in the paint. That’s the biggest difference in these games. Once teams tighten up and protect the crease the scoring chances disappear.

CJ Smith was in the lineup again and while he didn’t have much of an impact it’ll likely take him more time to fully recover from an ankle injury and gain confidence in it.

The same could be said for Garret Ross, he was an effective physical player before going out with a back injury and missing a quarter of the season.

After two straight losses it could be a chance for Dalton Smith or Myles Powell to step into the lineup on Sunday in Hartford. Justin Danforth wasn’t getting a lot of help paired up with Ross and Adam Krause after the first shift of the game.

The Amerks are still without Seth Griffith, Kyle Criscuolo, Justin Bailey, Nick Baptiste, Brendan Guhle, Casey Nelson and Linus Ullmark who are all with the Buffalo Sabres.

No one wants to lose and Syracuse has pulled ahead of Rochester by seven points in the standings but this team is still holding on even as a shell of what it should be. There’s enough reason to be concerned but with the playoffs a guarantee and players coming back there’s no reason to panic.

Amerks lines that started the game:

The game in gifs…

GOAL!! 73 seconds into the game. Adam Krause tips in a shot from Zach Redmond. #Amerks up 1-0 pic.twitter.com/mLeawvMqTb

Nylander finally taking the hits instead of turning away or hitting the breaks. pic.twitter.com/HvYMeAs7Dk

Blackwell to Fasching and tap in by Nylander at 5:42 of the 2nd period.. #Amerks 2-1 lead wouldn’t last for long. pic.twitter.com/zB8pNZbct6

Austin Czarnik put Providence ahead 3-2 at 8:14 of the 2nd. They scored two goals within 83 seconds. pic.twitter.com/W7pmE6gb6L

Danny O’Regan scores! Protects the puck, gets it down low, picks up the loose puck and it’s a 3-3 game. pic.twitter.com/papEDNXErg

Goalie change. Jonas Johansson goes in net. Wilcox looks like he twisted something and he heads to the locker room. pic.twitter.com/nH5EcujhL7

And Austin Czarnik scores his 2nd of the game, first shot on Johansson. Providence takes a 4-3 lead. pic.twitter.com/NMKLh5lvD4

Wide open net for Nylander but he gave McIntyre plenty of time to get himself set for the save. pic.twitter.com/xAbcCDW4w2

Austin Czarnik scores his 3rd of the night into an empty net. Game over. The #Amerks have given up back to back hattricks. pic.twitter.com/hm90h7048L