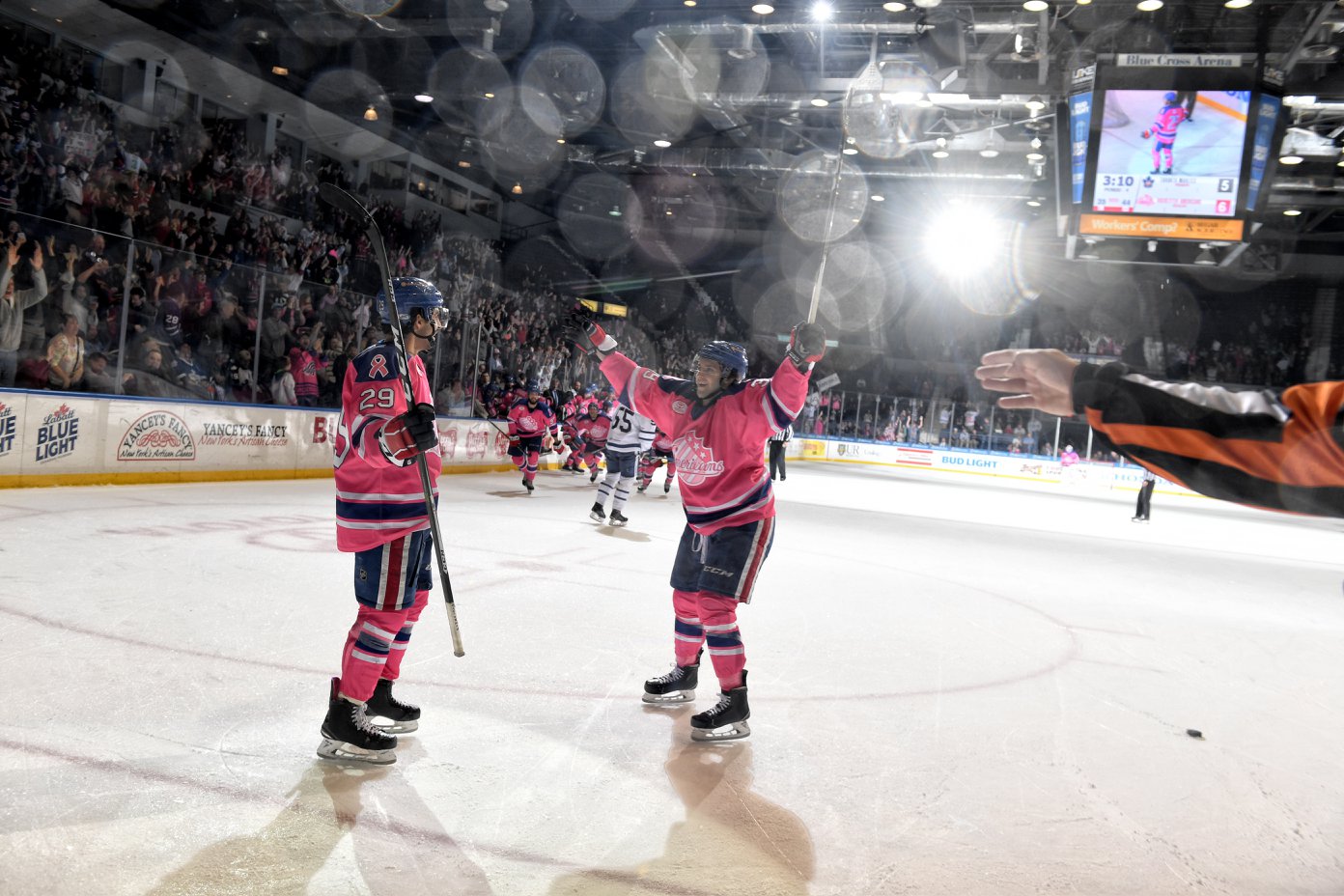 After a dismal display of hockey on Friday night by the Rochester Americans they bounced back on Saturday night against the league leading Toronto Marlies. The Amerks gave up a lead twice but also came back twice before winning in overtime tying a league record for most overtime games in a season at 29.

The story line the last two weeks has been the dominating play of Colin Blackwell as he continues to put points on the score sheet and guide the Amerks to winning hockey games. Ask any of the coaches or his teammates though and they say that’s the way he’s played all season, it’s just that he’s being rewarded with points that weren’t coming his way earlier in the season.

One of the things Blackwell said after the game on Saturday night was, “We play to our identity.” Forecheck hard, creating offense from loose pucks, recovering from mistakes,

“It was a mental toughness game for us after last night,” Colin Blackwell said in the locker room after the game.Â “Overall it was a good win for us and just kind of ride the wave.”

Sahir Gill put the Amerks up 1-0 in the first 50 seconds of the hockey game after a rush into the Marlies zone to intercept a breakout attempt. He spotted Sahir Gill moving into the slot, perfect pass, Gill to the back of the net.

Just under three minutes later Mason Marchment and Chris Mueller scored for Toronto and they took a 2-1 lead. A quick 3 on 2 rush for the first goal, left Mueller all alone in front on the second goal. The game settled down the rest of the first.

Second periods haven’t always been the past for Rochester but within a four minute span they took control of the game after Toronto seemed to forget they were still playing hockey.

Hudson Fasching intercepted a pass and scored after Garret Ross applied pressure in the corner forcing the sloppy pass.

Justin Bailey did what Justin Bailey is excellent at, powering his way down the ice and this time he found the back of the net. It was his seventh goal of the season in 34 games.

Colin Blackwell gave the Amerks a 4-2 lead at 10:14 of the second period by dancing around four Marlies players like a professional playing against pee wee hockey players (Credit @MarkUkLeaf for that description). Blackwell fumbled the puck, skated into and around four players, deked Calvin Pickard and it was an easy puck into the back of the net at that point.

Toronto showed up to play in the third period with goals by Jean Dupuy, Chris Mueller and Frederik Gauthier to gain a 5-4 lead. It wasn’t looking good for the Amerks but they weren’t out of it yet.

Chris Taylor had the option of calling a timeout when the Marlies iced the puck with just over a minute left to play and an empty net but he already had the players out there that he wanted, Colin Blackwell, Danny O’Regan and Hudson Fasching.

Blackwell won the face off to O’Regan, a quick shot, rebound landed in front of Fasching and it was a tie game with 69 seconds left in the third period.

Stuart Percy sent a pass from the middle of the face off circle to Sahir Gill at the far blue line, dangled a defender, picked a corner and beat Pickard clean.

Johansson made a big save in overtime to keep the game going but the other five goals were questionable.

Taylor on the play of Johansson, “For me everybody makes mistakes in hockey and what he did is that he stopped the last puck and Pickard didn’t.”

The delayed opening of the gates and start time of the game was due to electrical problems in the building. The lights above the ice weren’t working and at one point there was discussion of moving the game to Bill Gray’s Regional Iceplex. How that would’ve worked out for fans is a different topic that wasn’t immediately addressed. There was also a safety concern and possibility of an electrical fire. The arena managed to get the lights working, made sure everything was safe and they pushed forward with the game.

Eight players were assigned back to the Amerks on Sunday morning as expected:

Jason Kasdorf and Arvin Atwal have been reassigned to the Cincinnati Cyclones.

Vasily Glotov was released from his ATO but I doubt we’ve seen the last of him. Every coach has praised what they see in the kid. Chances are he was released from Rochester to sign another ATO in Cincinnati. We’ll find out more in the next 24 hours.