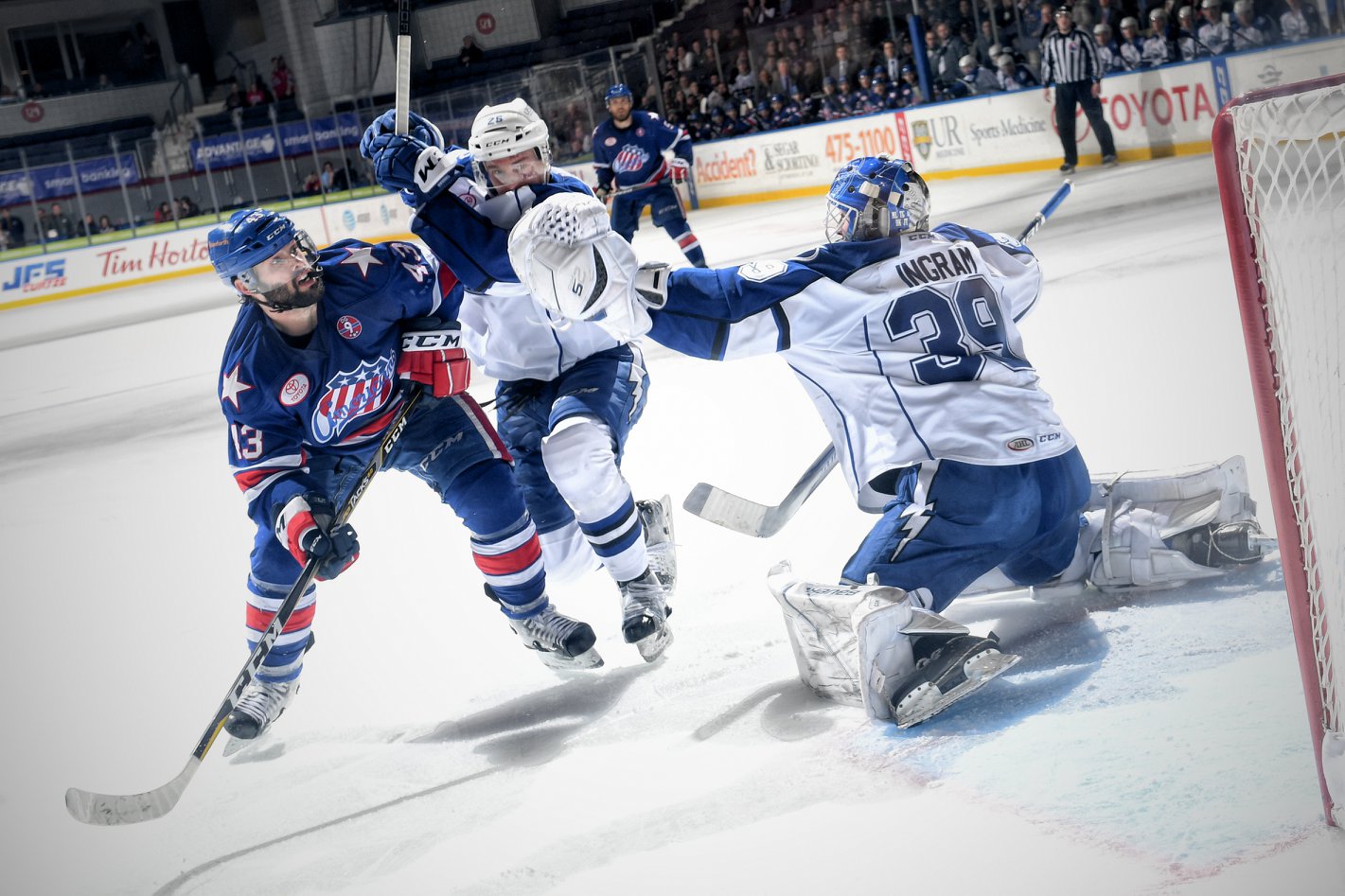 It only takes one mistake by a team to lose and that’s what happened on Wednesday night when the Syracuse Crunch shutout the Rochester Americans in a one goal game.

Matt Tennyson turned the puck over trying to leave the Amerks zone, Syracuse moved the puck around,Â Carter Verhaeghe fired a shot off the back boards and Matthew Peca found himself all alone to the side of the net and buried the bounce off the boards. One turnover, one goal against and that was the game.

Mistakes like that that will end a season earlier than anyone wants in the playoffs.

At the other end of the ice Connor Ingram made 38 saves for his fourth shutout of the season. He was challenged often with shots from all angles including a split save on Nylander after a two on one rush. After the game the Amerks talked about needing to get in deep to take his eyes away to create more chances, the only way you’re going to score on a hot goalie.

Linus Ullmark had 17 saves and the defense did a great job limiting the amount of shots he faced, minus the mistake above that resulted in a goal.

There was a combined 18 minutes in penalties handed out in the first period, 12 of those to the Syracuse Crunch. The Amerks power play finished 0/6, including one five on three opportunity. Score on one or two of those power plays and it’s a different game.

Casey Nelson had the save of the game in the second period. Ullmark was down after making a save, the puck flipped up high and Nelson quickly batted it out of the air with his hand.

In the 74th game of the season it had a playoff feel to it as these two two teams could be facing each other in the first round. After the penalty filled first period the game settled down with the Amerks continuing to lead the pace of play. That’s something that hasn’t happened in previous games against the Crunch. Is it a positive though this late in the season? When it’s against a team they’ve struggled against it is and they’ll have a chance at redemption on Saturday in Syracuse.

Hudson Fasching took a bad slashing call halfway through the third period but the penalty kill unit and Linus Ullmark took care of the two minutes. Two minutes late in a game can be a big difference as well.

The Amerks had a couple of last second shots with the best one by Danny O’Regan but again, couldn’t get the puck past Ingram.

Overall it was a pretty good game with the Amerks dominating most of it but one shot was the difference. Any questions about chemistry were dismissed early on in the game. Linus Ullmark looked like he didn’t miss a game. Casey Nelson said it took a period to get himself back into the pace of play here and then settled in.

A short game recap but that’s all there was to it.