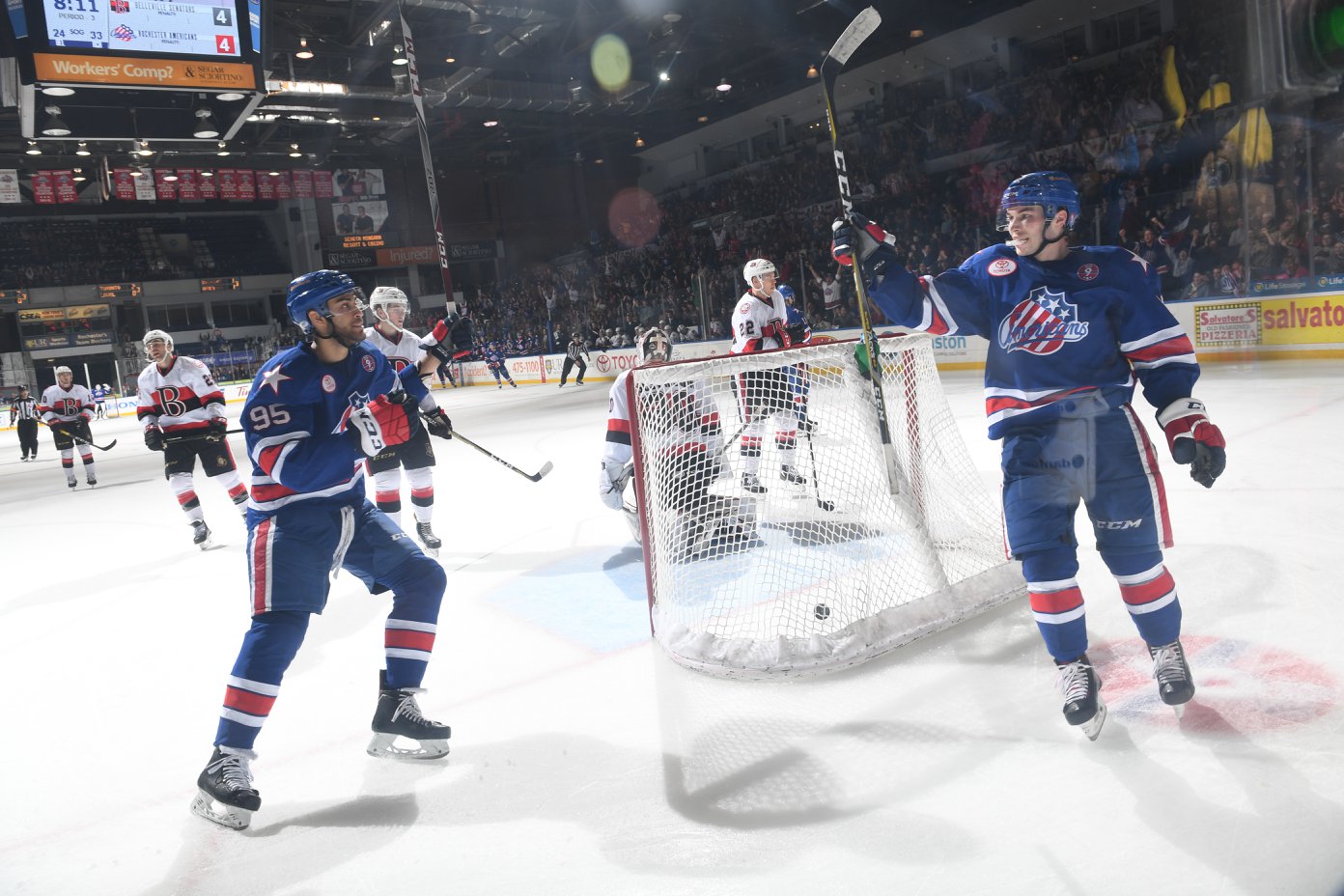 The energy of a home crowd can fuel the success of a team and that’s what happened on Friday night. Justin Bailey scored two goals to start an Amerks comeback and called it the best crowd in the three years he’s been a Rochester American.

An announced crowd of 7,846 may not have been the biggest crowd but for the last regular season home game it was loud and even when the Belleville Senators took an early 3-0 lead they didn’t give up on the team and the team didn’t give up.

Belleville scored their first goal at 5:02 of the first, another at 7:54 and the third at 10:12. Three goals in just over five minutes could be enough to deflate a team and a crowd but everyone stuck with it. Defensive breakdowns, bad passes, bad bounces and within no time Belleville had a lead.

Justin Bailey scored the first Amerks goal at 13:29 of the first period from the slot off a drop pass from Stuart Percy. A fake followed by a quick wrist shot and the puck was in the back of the net.

Justin Bailey said, “We didn’t have the start we wanted, a couple of bounces that didn’t go our way. The crowd was great and I wanted to do my best to get the crowd into it. This is the best crowd I’ve heard in the three years I’ve been here.”

Down 3-1 early in the second period Justin Bailey struck again intercepting a pass and immediately beat Filip Gustavsson top corner with another quick shot and the Belleville lead was down to one goal.

“He’s got a great shot, he needs to use it more,” Kevin Porter said after the game talking about Justin Bailey. Porter talked more about Bailey saying, “He’s a big part of our team. With his speed and his shot we’ve talked about he can be a difference maker.”

Hudson Fasching scored the Amerks third goal with 21 seconds left in the second period off a between the legs pass from Nathan Paetsch. Some quick stick work by Fasching had Gustavsson guessing and Fasching buried the shot.

Kevin Porter wasn’t on the ice for the goal but talked about the pass from Paetsch (with a laugh) saying, “That’s just a veteran play there. I mean, I don’t know why he’s in the corner but he made the most of it.”

Down by a goal to start the third period it only took nine seconds to tie the game. Danny O’Regan won the opening face off to Taylor Fedun, a quick pass to Kevin Porter who spotted O’Regan splitting the Belleville defense and O’Regan scored his 13th goal of the season.

Kevin Porter gave the Amerks a 5-4 lead with just over eight minutes left with a shot from the slot. Nathan Paetsch sent a pass to Danny O’Regan who sent a perfect pass to Porter for his 17th goal of the season.

Colin Blackwell made the save of the game late in the third period. Ullmark made the initial save and as the puck was flying through the air Blackwell didn’t hesitate to jump in the crease and clear the loose puck. If he wasn’t there it would’ve been a tie game again.

The insurance goal was scored by Colin Blackwell into an empty net with 41 seconds left to complete the 6-4 win.

Excellent answer. This is all about the Rochester Americans and City of Rochester right now.

It’s been an up and down season for Justin Bailey from the injury to finding his game along with consistency issues. He’s found some chemistry on a line with Kevin Porter and Danny O’Regan and the way they’re playing they’re going to stay together. Chris Taylor talked about Bailey after the game and how he has had some good shifts and then not so good shifts.

Taylor said, “He’s a game changer, he can change the game.”

There’s still a lot to be written about this season and a lot of work ahead for the team but one thing is certain, it’s a different season. It’s a season that will be built upon for continued success.

Bailey talked about this season being different and said, “Right from the start, right from the first team meeting we had with Porter talking to the guys and laying the foundation early it’s been a tight group all year. I really felt it when I came back from my injury just how tight the group was and it really played into our success. Everybody’s happy for everyone night in and night out. If anybody scores the whole bench is jumping up. You see it in practice, you see it in games. It’s a fun environment right now and we’ll carry that into the playoffs.”

“It’s always good to get a win on home ice, especially the last game of the season,” Kevin Porter said. “Fans deserve it.”

Rochester heads to Syracuse on Saturday night to finish the regular season. An Amerks win would lock up third place and it’d be Rochester vs Syracuse in the first round. Utica has two games remaining (Saturday and Sunday), they’re three points behind the Amerks. If Rochester loses in regulation or overtime and Utica wins their remaining two games it’d be a Rochester vs Toronto first round.