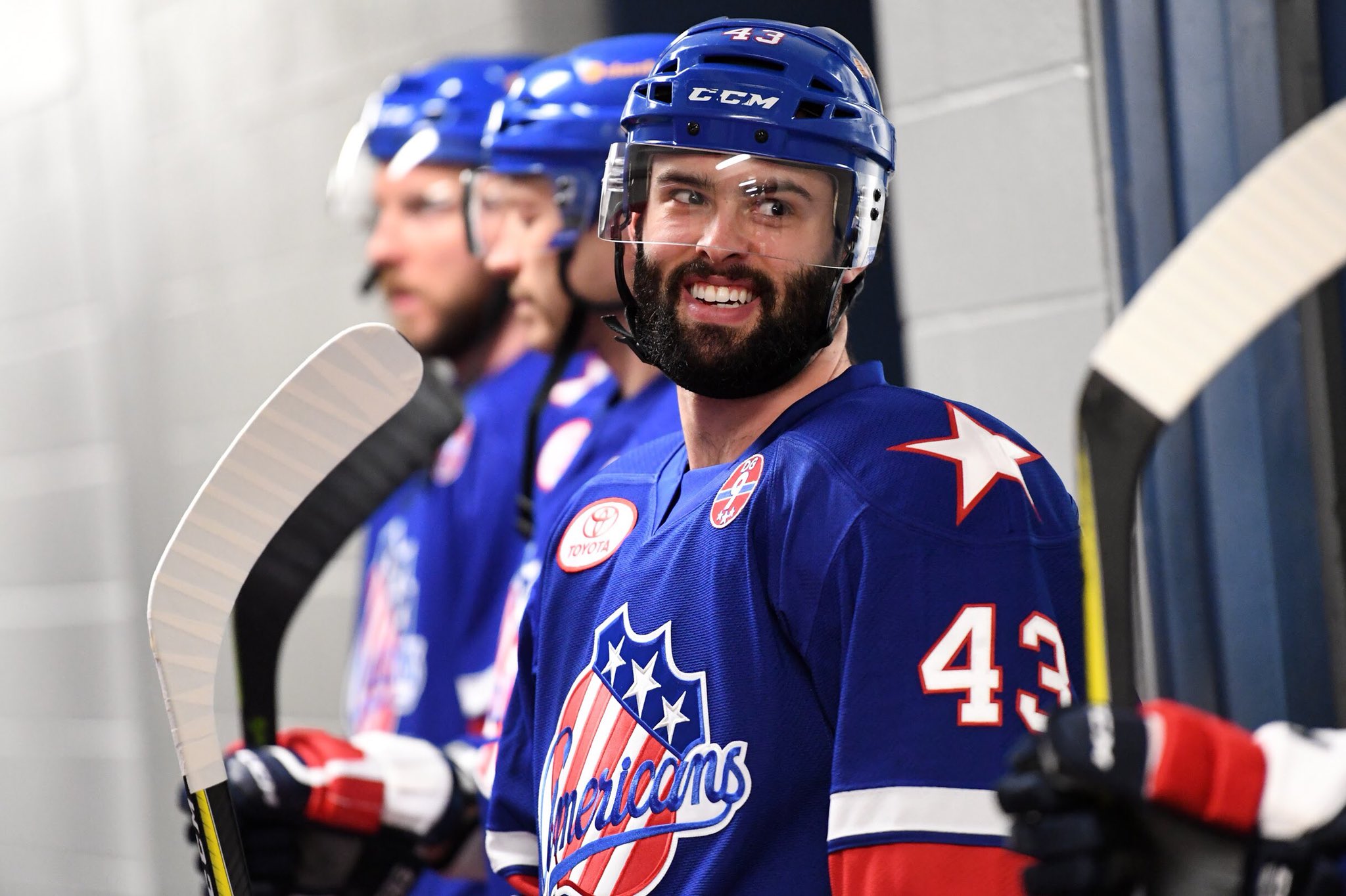 Colin Blackwell signed a two year contract this week with the Nashville Predators, that’s a big jump from where he was at this time last summer.

“I think he was probably one of our first calls in the interview process,” is what Scott Nichol had to say about Colin Blackwell when I asked him at what point he was on their radar. Scott Nichol, an Amerk Calder Cup champion and Hall of Famer, is now the Milwaukee Admirals General Manager and Nashville Predators Director of Player Development.

After a season with San Jose Barracuda in the AHL during the 2016/2017 season Colin Blackwell spent the summer without any offers to play hockey. He received an invite to the Buffalo Sabres Prospects Challenge last September after former Harvard teammate and close friend Sean Malone was sidelined with an injury.

Amerks head coach Chris Taylor wanted to see what Colin Blackwell was capable of so he put him on a line with CJ Smith and Hudson Fasching. Colin scored two of the three goals in a loss to the New Jersey Devils prospects. HeÂ signed an American Hockey League contract shortly after that and went on to lead all forwards on the Rochester Americans roster in the 2017/2018 season with 17G+28A for 45 points.

I asked Nichol what it was about Blackwell that interested Nashville and he said, “You look at our team up top and we’ve traded away a lot of our prospects and there’s a lot of holes there. The way that Colin competes, drags his teammates into the battles and he has the skill to finish plays. He does a exactly what we’re looking for in Nashville and Milwaukee and he’s going to have a great chance. Hopefully we don’t lose him and he comes to us (in Milwaukee).”

Nichol can also see a little bit of himself in Blackwell saying,Â “The way he plays, I gravitate to those kind of players. Personally in my career I didn’t make the NHL until I was 25/26. He’s a young player that has a lot of upside and that’s why we signed to him to a two year contract. We consider him one of our high end prospects.”

Talking to Nichol a little bit more about comparing himself to Blackwell he said,Â “I do, just get a chance and an opportunity and that’s what we have. We have great opportunity for him. He’s young and he’s going to be a huge fabric of our organization and I’m really excited for him to be a part of it and he’s really excited for it.”

“I watched him a lot. I watched him in Harvard when I was watching Jimmy Vesey and Tyler Moy so I’m very familiar with him. He was a little banged up at Harvard but you could just see how hard he plays. He’s like a dog on a bone on loose pucks and that’s hard to teach – it’s in you.”

There was a time in 2014 that Colin Blackwell didn’t know if he’d ever play hockey again after a serious concussion. Four years later that concussion is in the past. The path that he’s been on to get to this point has been the result of talent, passion, grit and some luck in a way (and bad luck for others). A fresh start in being invited to the Sabres prospect challenge last year after some bad luck for a close friend has resulted in a new career for Colin Blackwell.

“He could make our team in Nashville out of camp.” Nichol added, “Peter Laviolette hasn’t seem him play but I think he’s going to really fall in love with his style. That’s what Nashville is all about. Speed, tenacious and skill. That’s where I pull back and hope he has that opportunity. I see a lot of similarity in myself in him just getting the chance and just getting to prove himself.”

“We went after those bubble guys who could probably be in the NHL on other teams maybe where they don’t have prospect depth so we went and targeted those guys. It was myself and David Poile (Nashville Predators General Manager),” Nichol said. “When you have the GM of your NHL team calling you on the first day and first hour of the interview process you know you’re number one on their list. As a player that’s all you can ask for, when someone reaches out to you in the first hour of that process you’re like ok this team really wants me.”

Randy Sexton and the Buffalo Sabres had talked to Colin Blackwell and his agent about a place in the organization but it’s clear that Nashville lead the way and provided the best opportunity for Colin to advance his career.

Blackwell talked all season about having a championship mindset after leading the San Jose Barracuda to the third round of the playoffs in the 2016/2017 season. He knows what it takes for a deep playoff run and while that didn’t happen with the Rochester Americans he’s planning on trying to either lead Milwaukee or Nashville in the 2018/2019 season.

Everyone knows that the American Hockey League exists for development of players hoping to advance to the NHL. In recent years the league has seen a shift where simply developing players isn’t enough, they need to develop through winning. That’s something that only a handful of teams used to believe in.

“I think it goes hand in hand,” is what Nichol said when asked about development and winning. “I try and model our team to when I was there (in Rochester). I know it was a long time ago that we were successful in Rochester. We had older guys that lived in the community, they have families and a family shield to it. You have a good mix of older guys and younger guys. It’s invaluable those lessons to play into the middle of June. We were lucky to do it three years in a row there in my career. That’s how you learn, that’s how you compete, that’s how you learn to play hurt and that’s how to learn to play when you’re tired. It’s the best time of the year when it’s sunny out and your wearing shorts and flip flops to a pregame skate or optional. Winning does go hand in hand with developing.”

Colin Blackwell often talked about having a championship mindset and that’s something Nashville is looking for in him as a player. They’ve reached the post season, but until you win a cup it’s an ongoing battle. Colin is the type of player that everyone should wish success upon. Late round pick, many teams have passed on him and here he is proving he can be a team leader.

At one point late in the season Amerks head coach Chris Taylor talked about Blackwell saying that everyone should watch video of him playing to see what he does and how he does it. That’s a pretty big compliment. Chris Taylor also said his job was to develop players to help them reach their goals of playing in the NHL. Depending how things go in the fall he’s helped another player advance his career and it’s through another former teammate and friend in Scott Nichol.

At one point late in the season, Amerks head coach Chris Taylor talked about Blackwell saying that everyone should watch video of him playing to see what he does and how he does it. That’s a pretty big compliment. Chris Taylor also said his job was to develop players to help them reach their goals of playing in the NHL. Depending how things go in the fall he may have helped another player advance his career and it’s through another former teammate and friend in Scott Nichol.

Blackwell embraced an opportunity with Rochester and turned it into a two year two-way NHL contract.