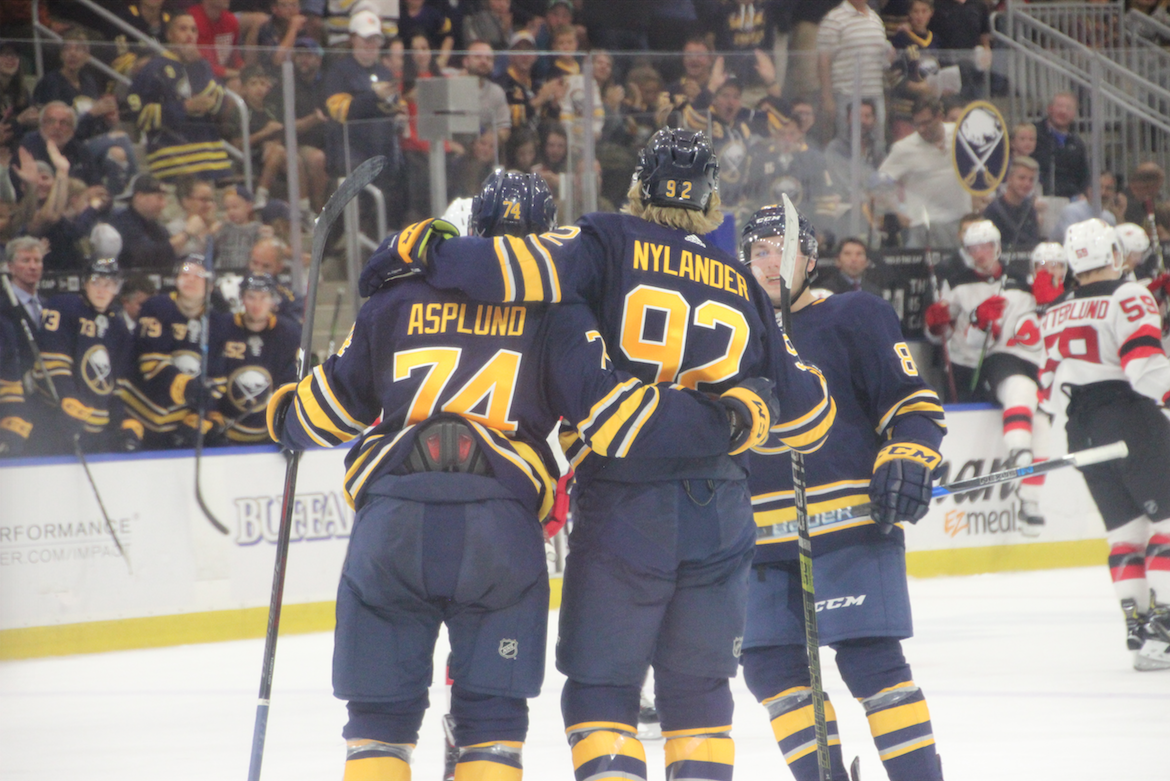 The first Sabres game of the 2018 Prospects Challenge ended with a 6-4 win and the game finished with the expectations that were hoped for. No one is planning a parade but there’s more than enough to be excited about.

Rasmus Dahlin was the obvious star that everyone came to see and he didn’t disappoint. His speed and physical play were as advertised. You’ve probably already read about Dahlin or saw for yourself. He’s an NHL star, it’s doubtful he’ll ever play for the Amerks so we’ll let the Sabres sites give him all of the additional accolades.

As this is obviously a Rochester Americans focused site this was the first time seeing players that will likely play in Rochester and have an impact on the season ahead.

The Swedes Are Impressive

Rasmus Asplund is good. Really good. Faceoff wins, puck battles, power play, penalty kill,Â five on five.. that man can do it all.

Victor Olofsson showed off the quick release shot that’s been talked about on the power play. A cross ice pass from Asplund and the one timer by Olofsson went straight to the back of the net, Devils goalie Mackenzie Blackwood had no chance.

After the game he said there’s still some adjustments that he needs to make adjusting to the ice here. There’s still some questions about his five on five play but if he can score regularly on the power play it’ll be more than enough.

In the second period Asplund was chasing a puck into the offensive zone while shorthanded, used his body to tie up two Devils players and was able to get the puck loose to Alex Nylander who went to his back hand and scored.

All eyes are on Alex Nylander going into the new season and credit where it’s due, he had a decent game. One noticeable area of improvement was his power play work. He was playing in the slot versus cruising the perimeter. He mentioned after the game that he spent time this summer on rehab for his groin and at 100% health. He was better as the game went on and that’ll be a positive trend to continue compared to how he finished the 2017/2018 season.

Borgen is Easy to Play With

Will Borgen flew to Rochester when his season ended with St. Cloud State last season and in eight games with the Amerks it was clear he could play. He was paired with first overall pick Rasmus Dahlin and it looked like they’ve been playing together for a long time.

“He made people aware of when he was on the ice,” Chris Taylor said after the game talking about Borgen.

We’re going to see a lot of Borgen in Rochester and with the way he plays opponents aren’t going to like being on the ice at the same time as him.

An RIT Graduate Showed up to Play

Myles Powell is expected to play in Cincinnati this upcoming season given the depth of forwards on the roster but that didn’t stop him from playing a physical game and making his presence known. A devoted RIT hockey fan made a comment at the game wondering where his physical play has been because he didn’t play like this at RIT.

Powell also had an assist when a shot went off the right pad of Blackwood and the rebound went to Dahlin who scored his second of the game.

Dahlin steals the puck, feeds it to Powell, and follows up the shot for the juicy rebound for his 2nd of the night. #ProspectsChallenge pic.twitter.com/q5RfXZZTGE

There was one bad play where he raise an elbow in a hit onÂ Yegor Sharangovich and Sharangovich was slow to get up. The play sent Powell to the penalty box.

It’s easy to see Powell fitting into the role that Justin Danforth played with the Cincinnati Cyclones last season. Given the competition encouraged within the organization if he plays a two-way game like he did tonight we may see more of him.

Tage Thompson is going to make it tough on other centers in the organization. The first thing you’ll notice about Thompson is his height, the second thing is his skating. A defensive play by Dahlin cleared the puck out of the zone, Thompson took off and scored a shorthanded goal.

Dudeeeeeee….I’m getting an iso of Dahlin and he makes the solid defensive play and the puck happens to go right to Tage Thompson, who buries #Sabres @WKBW pic.twitter.com/MzDvlDz5tS

There’s a chance Thompson could force the Sabres to make some moves they hadn’t planned on making or he could be a big offensive threat on the Amerks roster.

Last April when the season ended there had been talk that Sean Malone could show up with a strong camp and play for a roster spot. That’s not looking so easy anymore.

As centers compete there’ll be competition among defensemen as well. Not only did Borgen play an impressive game but so did Brandon Hickey in his first look. It wasn’t a perfect game but he’sÂ an intriguing name leading into the season. Before playing his first pro game he’s already been traded twice in his career. He plays some smart heads up defense. Where he fits in the ranks behind Redmond, Guhle, Borgen, Tennyson, Fedun, MacWilliam and Pilut remains to be seen but he’s going to be in the mix.

Chris Taylor talked about guys playing this weekend without contracts saying,Â “We’ve been through this last year. I look at Colin Blackwell. He came in here on a tryout, one of our better players, got a contract with us and now he’s on an NHL contract. We want that for everybody. We want everybody to get where they want to be whether that’s in the NHL, a regular shift in the American Hockey League, whatever. We want everyone to prove themselves.”

It’s not only guys playing without contracts but guys that have AHL contracts that want to play in the NHL. Colin Blackwell is the perfect example as he mentioned. Weekends like this are the start of future careers and they’re going to help everyone achieve their goals.

No, we’re not planning a Calder Cup parade in June 2019 after one prospects game. We’ll be back for the second game on Saturday night to see if these positive takeaways continue against a different team.

Here’s all of the highlights:

We’ve got all the highlights for you right here. @dan_dunleavy on the call. #ProspectsChallenge pic.twitter.com/ZO7HVshrvx