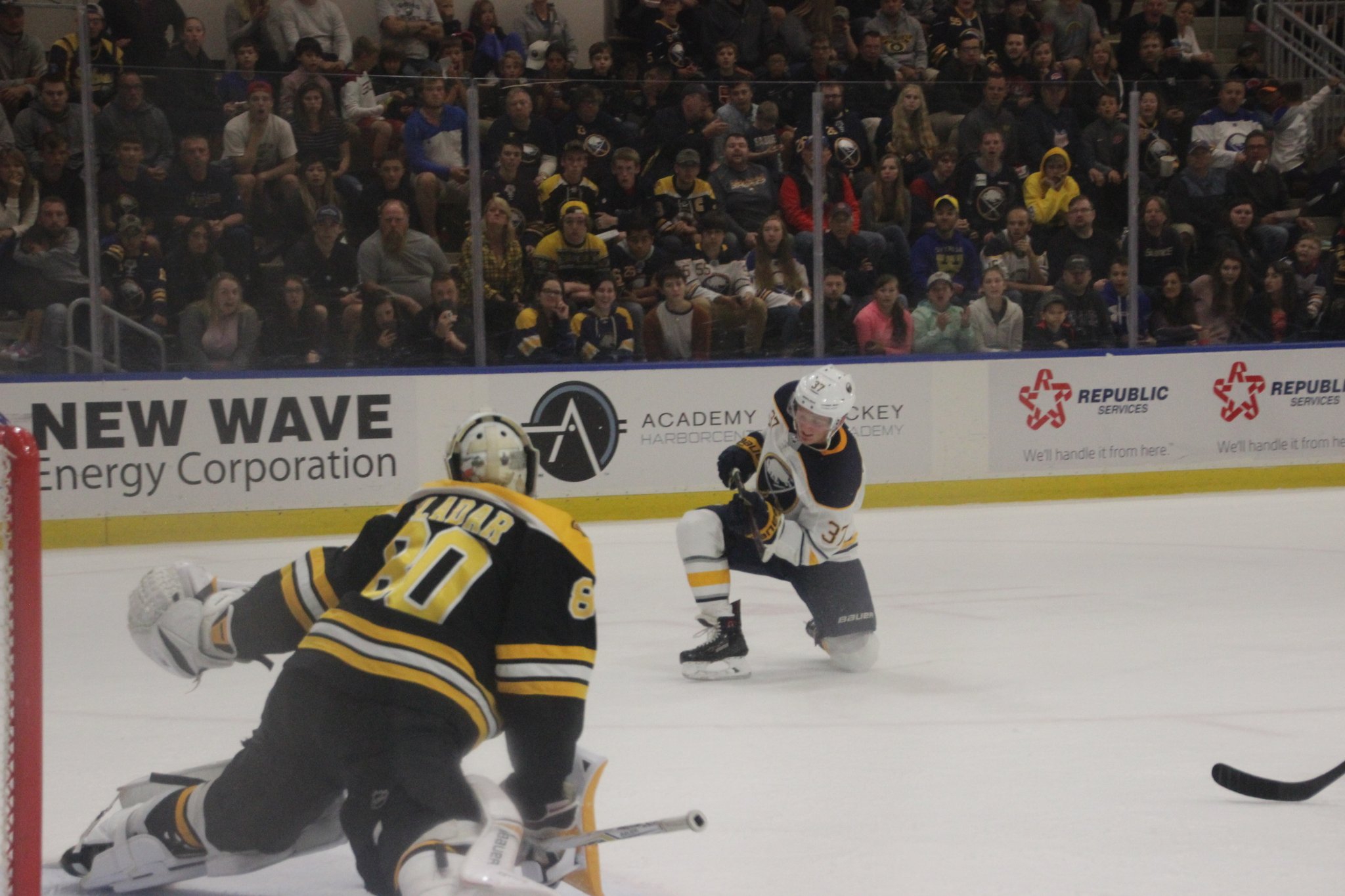 The Buffalo Sabres prospects had a challenge in game two vs Boston and they only had themselves to blame. A valuable lesson for many in the second game after winning the night before in an exciting game.

Into the third period Chris Taylor said, “Everybody’s trying to do it by themselves. We weren’t using each other like we did last night. Their intentions were in the right spot but again you have to use everyone on the ice.”

Tage Thompson echoed Taylor starting his post game with, “Tonight we were trying to do a little too much individual play and it kind of hurt us.”

A penalty filled second and third period gave each time a lot of work on both sides of special teams, Boston went 0/7 on the power play, Buffalo was 0/5. Quality work by the penalty kill units.

Takeaways from the game:

In a game with high end draft picks it was a player on a minor league contract scoring the only goal. Vasily Glotov, in his third Prospects Challenge, scored with assists to Eric Cornel and Matej Pekar. After the game Glotov said, “It’s my first pro year. I need to impress coaches, I need to impress management doing my best and have a shot at main camp.”

Like Myles Powell, Glotov is expected to play in Cincinnati this upcoming season and is taking every opportunity to make an impression for his future.

Ukko-Pekka Luukkonen played with confidence in his first Prospects Challenge game and was steady throughout the game. UPL will certainly be watched closely when he plays in The OHL this season with his eyes set on an NHL contract in 2019.

At the other end of the ice Bruins goalieÂ Dan Vladar looked like he may have a future in their organization.

Will Borgen and Rasmus Asplund were two players that were again consistent throughout the entire game. The typical cliches of puck battles, physical play and trying to use the entire ice surface to their advantage. If they play again on Monday afternoon keep your eyes on them and how they play.

There’s an expectation of seeing Casey Mittelstadt and Alex Nylander dominating in this games, something they haven’t done. That isn’t to say they’ve played bad hockey in any way but minus a few plays there hasn’t been anything that stands out in terms of a full game. No, they aren’t a bust, just an observation.

Next up is the Sabres vs Pittsburgh on Monday at 12:30pm for the final game of the 2018 Prospects Challenge.