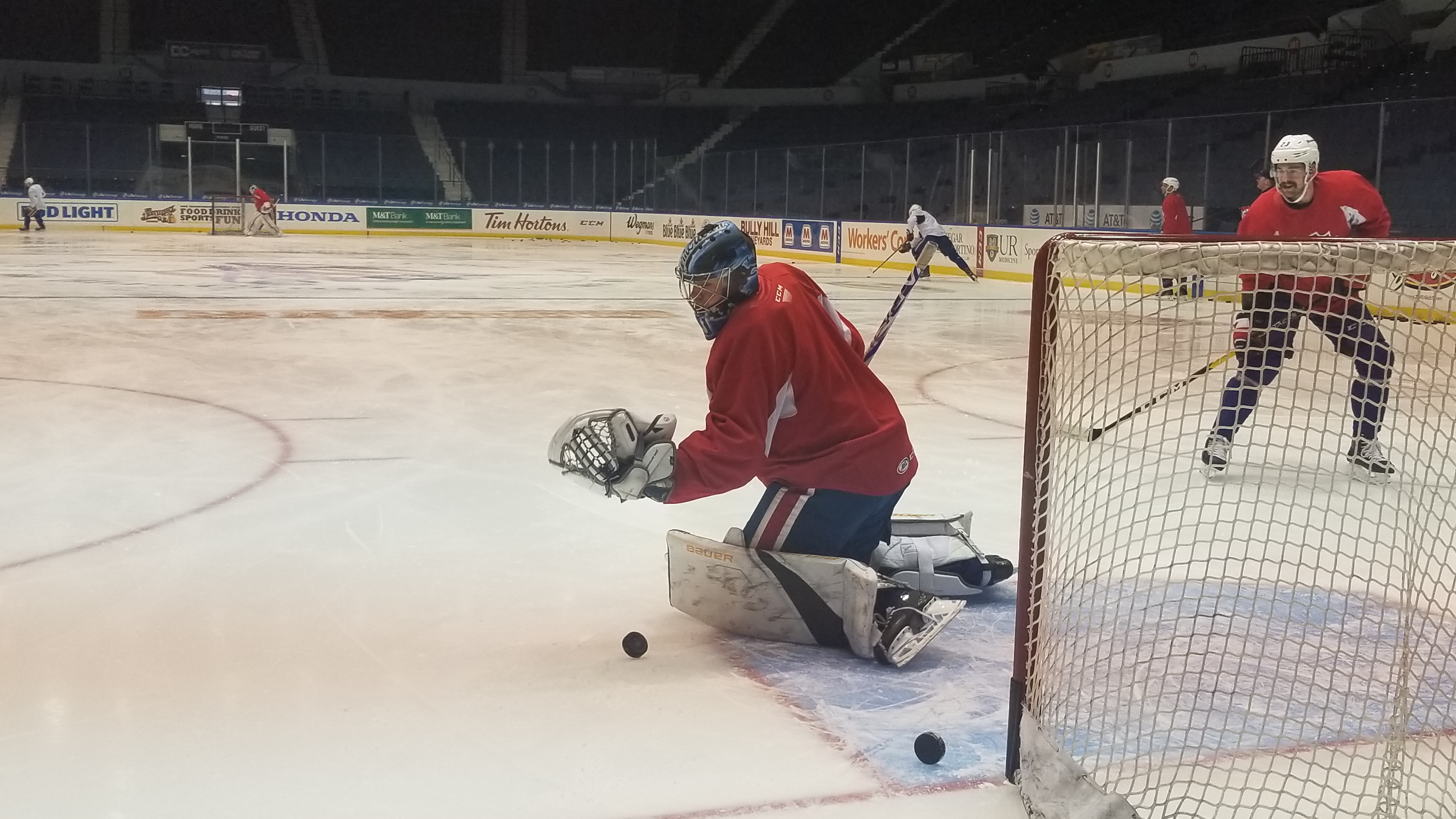 The North Division is starting to tighten up, as expected, and another divisional game tonight for the Amerks gives them a chance to either extend their first place lead or allow yet another team to inch closer in the standings. Utica departed Rochester with a 5-4 win almost two weeks ago in what was considered a concerning and disappointing loss as a game they should’ve won.

Rochester has a 2-1 record in three games against Utica this season and has outscored them 14-6 in those games. Recent numbers may sound depressing but this is a team, like all teams, the Amerks are capable of beating to get back on a winning streak.

Chris Taylor addressed a question about the struggling power play saying, “We’ve had lots of chances but the pucks not going in. We’ve hit, in the last three games, three or four posts that could’ve went in. We’ve fanned on shots that we didn’t fan on shots earlier in the year. We have to work through that. We’re getting good looks but it’s the execution.”

Last weekend in two games the Amerks only goal was from Victor Olofsson. In the previous three games they had scored 12 goals.

“No. That stuff happens, it’s a long season. We didn’t have our best weekend and we addressed the issues we needed to at practice this week and moving forward,” Zach Redmond said after practice when asked if there’s a scoring slump. “We started off pretty hot and kind of got away from what made us successful. I don’t think we were playing near aggressive enough, we weren’t working hard without the puck. Everyone wants to score and finish plays but in order to do that you have to get the puck back and make sure you’re doing stuff away from the puck.”

Chris Taylor talked talked about practice this week and working on details that may have gotten away from the team, “It’s always a refresher and we have to work on things that we haven’t been good as of late. It’s just getting dirtier, harder to play against, and when we do that we have the skill in here and makeup here of a great team but we have to apply it every game.”

Goaltender Jonas Johansson was called up from Cincinnati to Rochester this week which came as a surprise. Scott Wedgewood and Adam Wilcox are both at 100% health and capable of playing. Johansson had said it was a welcome surprise to him and he was immediately on a plane and in Rochester for practices.

Chris Taylor addressed the reason for the call up saying, “He’s playing well, just wanted to see what he could do, get a rotation in and see what happens. He’s a bright future in this organization so we just wanted to reward him by bringing him up.”

The move wasn’t made as a way of sending a message to Wedgewood or Wilcox that they are at risk of losing games. The coaching staff and management wanted to get him a high level of practice to see where he’s at right now. The organization continues to stress internal competition and making sure everybody is on their toes.

Johansson said he hadn’t talked to the coaches as of Tuesday afternoon about the plan for him but he’s aware of the possibilities. He said, “It’s nice to see that guys are making it, guys are doing really well, so why shouldn’t I be doing that well?”

There are no plans for additional moves from Cincinnati any time soon at other positions to try and spark some offense. Tyler Randell and Yannick Veilleux have been extras looking for more playing time, there’s extra defensemen, and Kyle Criscuolo is expected back within two weeks. Andrew Oglevie is currently on the day to day injured list.

One of those extra defenseman has been Nathan Paetsch.Â “Nothing getting better than getting Nathan in a game and he played really well for us,” Taylor said when asked about Paetsch playing his first game of the season this past Saturday in Binghamton. “I thought he was one of our better defensemen.”

Paetsch won’t be playing in two straight though. Matt Tennyson was assigned back to the Amerks this morning and is expected right back into the lineup. Jack Dougherty will be the other extra defenseman with Brand Hickey set to also play. Andrew Oglevie is likely to be out of the lineup for the second straight game after being banged up last Friday. Look for Scott Wedgewood to get the start with Johansson backing him up.

Update: Don Stevens mentioned on The Sports Bar ESPN Rochester 95.7FM that Jonas Johansson will get the start tonight. Sounds like a message is being sent.

Lawrence Pilut has played three games with the Buffalo Sabres and increased his playing time and presence through those three games. Asked about missing him in the lineup Zach Redmond said,Â “Yea we miss him. One guys not going to win you two games but obviously we miss him. We just need to play harder, that’s all that is.”

Amerks have three games this week starting tonight vs Utica (which will be on MSG as the first of three televised games), Friday at home vs Providence, and on the road in Syracuse on Saturday.

ICYMI, Alex Nylander is playing pretty well this season (compared to the first two seasons). Here’s details on that:

Alex Nylander is Playing a Confident Game this Season