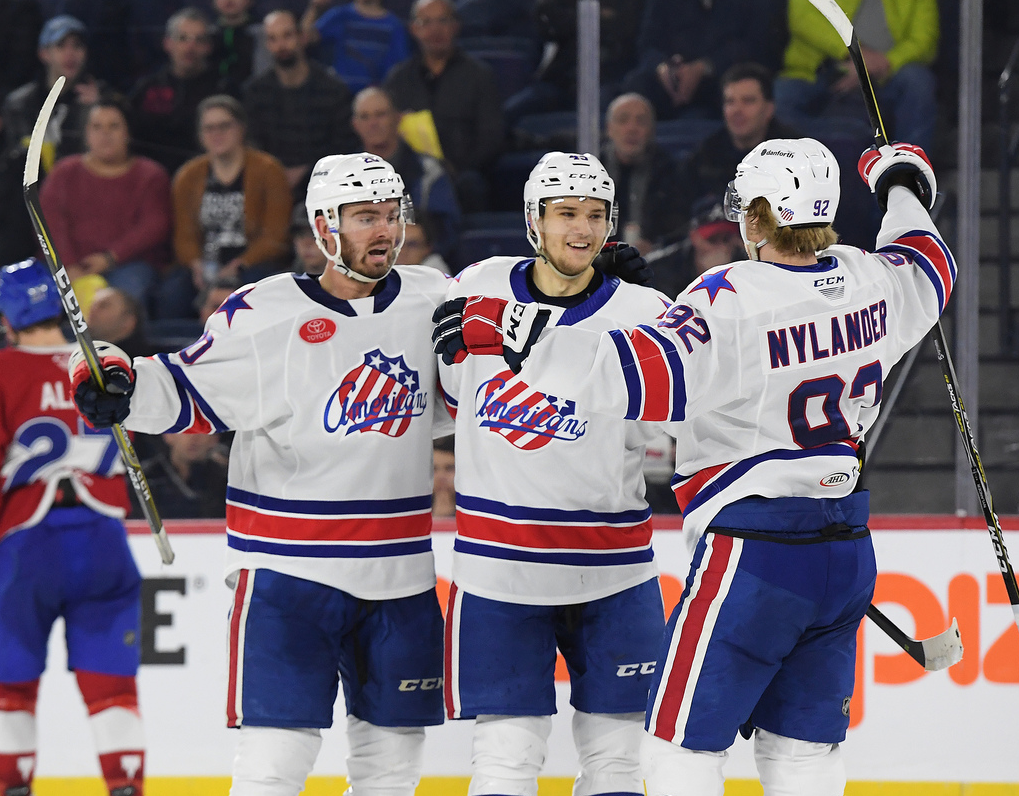 The Rochester Americans won their second straight game in a shootout beating the Laval Rocket on Friday night in Laval. Alex Nylander scored once in regulation and also scored the winner in the shootout to lead the Amerks to the win. Overall it was a great game back and forth, the Amerks were the better team most of the game even though the score doesn’t show it. They played a full game with the only struggle being the penalty kill unit with another goal against.

It was looking as if the first period was going to end scoreless until the puck was sent around the boards as the clock ticked down in the first andÂ David Sklenicka fired a shot from along the boards beating Scott Wedgewood glove side.

Alex Nylander scored a power play goal for his eighth of the season, four of those now on the power play, redirecting a shot from Brendan Guhle. Wayne Simpson also tallied an assist with the pass from the point to Guhle.

Less than a minute laterÂ Alex Belzile scored a power play goal for Laval to give them a 2-1 lead.Â Daniel Audette took a shot from the point, Wedgewood made the save, rebound was at the side of the net for Belzile. Dalton Smith was in the box for goalie interference.

With 49 seconds left in the period Judd Peterson scored his first American League goal in his first game of the season with the Amerks. Peterson carried the puck in on the right side and flipped the puck to the center and found it’s way into the net. Credit was initially given to Danny O’Regan. The replay wasn’t clear if it went in off a Laval player or just bounced it’s way in.

The third period was a strange one in the way that there was no scoring and no penalties were called. Rochester lead the pace of play and had a 12-3 advantage in shots in the final period.

During the three on three overtime session the best chance for a win was a cross ice pass from Rasmus Asplund to Victor Olofsson but he was robbed by a quick glove save from McNiven. Perfect pass, perfect shot, perfect save. Scroll down for a clip of the play.

For the second straight game for the Amerks they went to a shootout and the second time in a row they won thanks to a goal off a back hand. Wayne Simpson scored for the Amerks second attempt, Alex Nylander finished it off as the fifth shooter for the game winner. Nylander skated down the left side, gave a short shoulder wiggle, pulled the puck to his back hand and lifted it over the pad of McNiven. Victor Olofsson, Danny O’Regan, and Rasmus Asplund also had scoring chances in the shootout.

Scott Wedgewood finished the game with 22 saves for his 13th win of the season.

Both teams will play again on Saturday afternoon at 3pm in Laval.

Here’s the rest of the game and scoring in gifs:

David Sklenicka fired this one past Wedgewood with 2 seconds left in the first. Rocket lead 1-0. pic.twitter.com/0y0wisglIx

Guhle puts the puck on net, Alex Nylander tips it in! Simspon also had an assist. 1-1 game with the PP goal. pic.twitter.com/rB7GLiGxNZ

Rocket take a 2-1 lead with their own PP goal. Play was reviewed because the net was forced off, good goal they say. pic.twitter.com/geO35nvDRZ

Sorry O'Regan, wasn't your stick that tipped it in. pic.twitter.com/f0yncahEh3

Olofsson was robbed. Best chance of the OT. pic.twitter.com/rljosDgnbD

Wayne Simpson made it look easy scoring on his shootout goal for the #Amerks pic.twitter.com/dUWtgmbDMw

Another take on the Nylander shootout winner for the #Amerks! Credit @_hdealz for the idea. pic.twitter.com/euxazqH03X