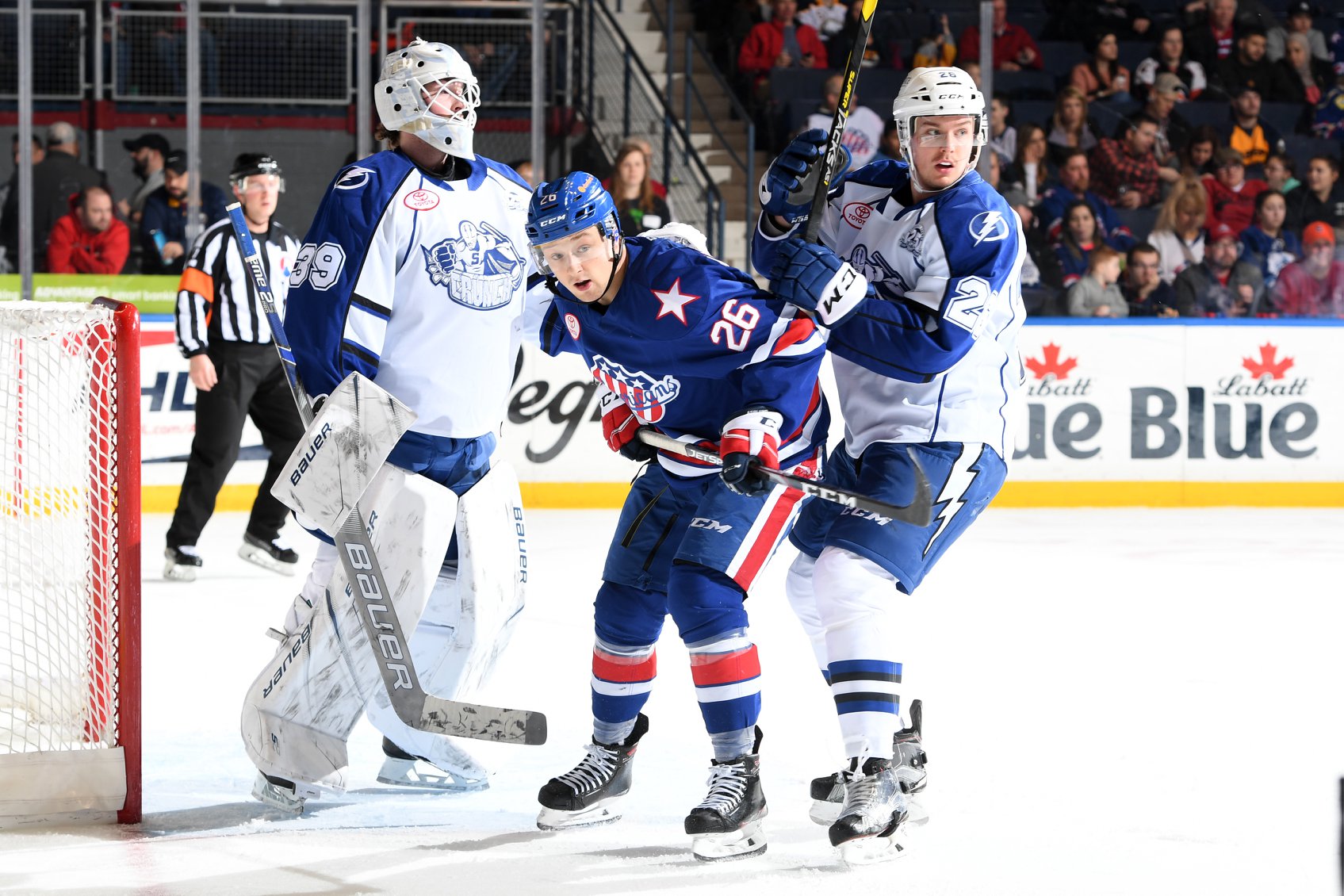 The Rochester Americans lost their third straight game on Friday night in a 1-0 loss against the Syracuse Crunch on home ice. Saying it was the third straight loss makes it sink in a bit more considering it was a close game with a playoff like atmosphere to it. Looking at the last five games the Amerks only have one win.

Friday night was the kind of game that had a bit of everything but a lot of goal scoring and was still exciting to watch from start to finish.

A moment that would come back to haunt them by the end of the night was a shot off a post by Eric Cornel early in the first period. Will Borgen sent a perfect cross ice pass to Cornel at the bottom of the face off circle but the one timer went off the far post. The goal judge thought it went in and turned on the lights. The ref who was in the right position immediately said no. The net was wide open. Initially thought that Ingram got a piece of it but watching it back it was clear it hit the far post.

Great pass from Borgen to Cornel but somehow Ingram got a piece of it with his stick. pic.twitter.com/pZxVDa1FPM

Andy Andreoff would score the only goal of the game at 13:34 of the second period as the Rochester forwards made a mistake in the neutral zone and that’s all it would take. Chris Taylor said it was on the forwards not cutting off on the forecheck and a quick step down ice for Syracuse to find the back of the net.

Apologies to #5. Wasn't all on him for that Andreoff goal to put the Crunch up 1-0. MacWilliam went for the center ice hit. pic.twitter.com/Qk7hUJBDsj

In the second period the Amerks were the better team but they were still unable to score. The same could be said for much of the third period. There were scoring chances by a lot of players and they either missed the net, didn’t shoot fast enough, or went for a pass. There were also posts that were hit.

Scott Wedgewood was excellent with 31 saves. At the other end of the ice Connor Ingram was perfect with 32 saves.

It was a game with playoff like intensity that favored the visiting team as they were able to find the back of the net. Matt Tennyson and Yannick Veilleux were the only two players that didn’t have at least a shot on net. A winnable game and they’ll have another chance.Â The same two teams play against each other again Saturday night in Syracuse.

Here’s a more in depth recap courtesy of Amerks.com

(Rochester, NY) â€¦ Following a 1-0 loss to the Syracuse Crunch (30-15-2-1) Friday night at The Blue Cross Arena, the Rochester Americans (29-16-3-2) have gone three games without a point for just the second time through 51 regular-season games during the 2018-19 campaign. The contest was the first-leg of a home-and-home series between the two clubs and first of four matchups over the next nine days between the intrastate rivals.

With the regulation defeat, the Amerks have collected 17 out of a possible 26 points in their last 13 games and now share the top spot in the AHLâ€™s North Division standings heading into tomorrow nightâ€™s rematch with the Crunch. Rochester has also notched 25 points in its last 20 games dating back to a 4-0 shutout win in Cleveland on Dec. 26.

Of Rochesterâ€™s 18 skaters, 16 recorded at least one shot on net, including a team-high five shots from defensemanÂ Brendan Guhle, while goaltenderÂ Scott WedgewoodÂ (17-9-2) was tagged with the loss as he made 31 saves. Dating back to the day after Christmas, Wedgewood shows a 9-5-1 record during that span and has won has won eight of his last 12 games.

Syracuse improved to 9-2-0-0 in its last 11 games as winger Andy Andreoff tallied his 18thÂ goal of the season during the opening period and netminder Connor Ingram recorded his league-leading sixth shutout victory of the season while stopping 32 shots.

In a playoff-type atmosphere full of physicality and little scoring chances, Syracuse, which outshot Rochester 12-5 during the opening frame, scored the only goal of the period and eventually the game at the 13:34 mark.

Midway through the first frame, former Amerk Cory Conacher tapped a breakout pass to Alexander Volkov, who evaded a hit in the neutral zone before he and Andreoff skated in on a 2-on-1 rush entering the offensive zone. Volkov left the puck in the high-slot for Andreoff and the winger used a Rochester defender as a screen to fire the puck over the glove of Wedgewood with 6:26 left in the frame.

The second stanza started with a heavy hit byÂ Andrew MacWilliamÂ just eight seconds into the frame, but the Amerks pressed for the game-tying goal as they drew three power-plays during the period. Rochester, however, was unable to solve Ingram despite firing 17 shots.

â€œAfter a slow start, I thought we had a good second and third periods,â€ said Amerks team captainÂ Kevin Porter, who appeared in his 200thÂ game as an Amerk. â€œWe need to have a better start, especially at home. Itâ€™s not acceptable.â€

â€œWe need to get more shots and guys in front of their goaltender,â€ added Porter.

As the two clubs entered the final period of regulation and the Crunch clinging to a one-goal lead, they traded chances as they finished with a combined 21 shots. During the final two minutes of the contest, Rochester pulled Wedgewood for the extra attacker, but much like the previous 58 minutes, Ingram stonewalled the Amerks as he held on for the 1-0 victory.

â€œItâ€™s no secret that guys get up for these types of games,â€ MacWilliam said. â€œThe rivalry that has developed over the last couple of seasons. Looking at the standings, we are matched with them. Every game counts against one another.â€

â€œIt was a close game between two teams who are even with each other in the standings,â€ said Wedgewood. â€œThey got a goal, we did not. They hit a post in the first period and we hit a couple posts, and thatâ€™s the way it goes sometimes.â€

The Amerks meet the Crunch again Saturday night as the home-and-home series shifts to the War Memorial Arena in Syracuse for the seventh meeting this season between the longtime rivals. Rochester will close out the three-game weekend on Sunday, Feb. 17 at 3:05 p.m. with a matinee against the Binghamton Devils at The Blue Cross Arena. Both games will be carried live on The Sports Leader AM 950/95.7 FM ESPN Rochester as well as AHLTV.