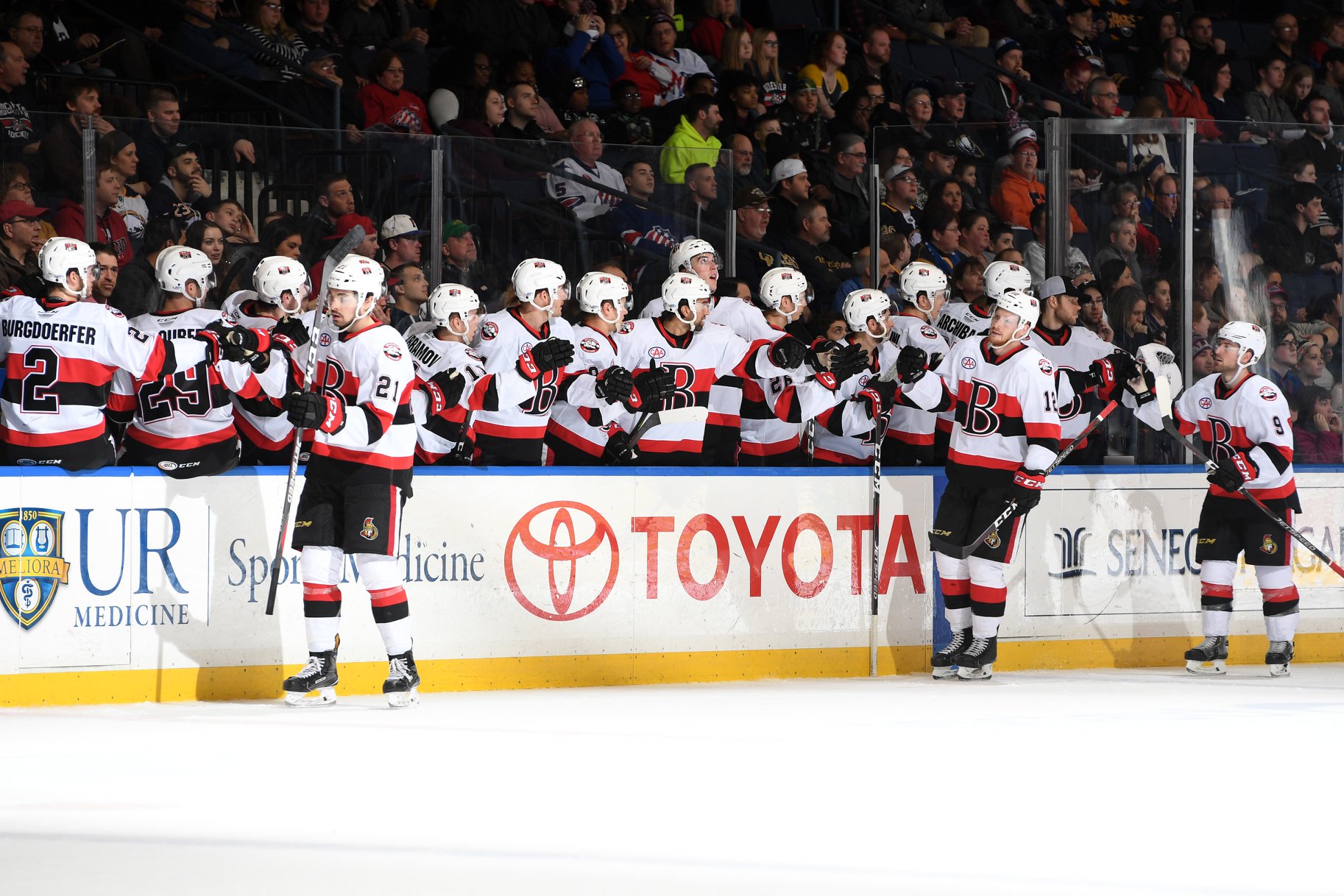 “The first two periods we didn’t have anything tonight,” Chris Taylor said after the game. “We played terrible.”

Those are some of the most candid public comments that Taylor has made this season. There’s likely times that he’s felt that way and shared that with the locker room but it’s not often he’ll make the comments post game like he did on Saturday night.

Belleville extended their point streak to 15 games which now includes 11 wins and four shootout losses. On February 3rd they were nine points out of a playoff and now 20 days later they’re only one point out of fourth place.

“All of our top guys didn’t play very well tonight. We just didn’t get enough, didn’t have enough jam. They just looked a lot better. Stronger, everything. Skating better than us. Maybe we thought it was going to be easy even though they knew they’re on a 14 game point streak. It’s disappointing quite honest with you. I’m really disappointed in what transpired here.”

Sean Malone scored his third goal of the season in his third game back with an assist to CJ Smith. Senators goalie Marcus Hogberg attempted to play the puck behind his net and a rushing CJ Smith was able to create a turnover and pass to Malone in front for a short handed goal at 11:04 of the first period.

A weaving move by Stefan Elliott around CJ Smith and into the slot allowed him to tie the game at one just 5:12 into the second period. It was a nice back hand goal from the middle of the ice, a spot he never should’ve had the opportunity to shoot from.

Rochester gained the 2-1 lead when Andrew Oglevie found a loose puck in front of the net to score his third of the season. Alex Nylander circled with the puck right side to keep the puck in the zone and sent a crisp pass to Zach Redmond on the opposite side down low. Redmond took the shot that was saved by Hogberg on the inside of his right pad and with the rebound in front of the net it was picked up by Oglevie to score.

It only took 22 seconds for Belleville to score and tie the game again.

Darren Archibald scored unassisted after intercepting an Andrew MacWilliam clearing attempt. Archibald scored from the far left wing side with a low shot. That’s a goal that Adam Wilcox probably wants back.

Response is one thing that the Rochester coaching staff has talked about for two seasons now. Taylor addressed that again tonight saying, “It’s responding. If we let a bad goal in or a play that we could have had before the guys just get down. It’s getting dragged on.”

Belleville took a 3-2 lead at 14:17 of the second period, their third goal of the period, when Nick Paul tipped a puck perfectly mid-air off what looked like the shaft of his stick from a shot by Andreas Englund. The play started after Will Borgen sent the puck up the boards and Wayne Simpson wasn’t able to get a piece of the puck to send it out of the zone. A pass from Stefan Elliott to Englund resulted in the shot.

Tyler Randell, Yannick Veilleux, and Andrew Oglevie didn’t stop skating and the line was able to score goal with 10 seconds left. The Amerks scored three goals in the game and it was the third goal of the season for each player. Tyler Randell tipped a shot by Oglevie from the point.

“We had our opportunities. Everybody made mistakes. Everybody was part of it,” Taylor said after the game. “It was definitely a team loss tonight.”

The night before the Amerks went down 3-0 in the second period but was able to score three in response in the same period before winning in overtime.

When Taylor was asked about that game he said, “I liked that we came back from three goals but I didn’t like how we gave up after making a mistake on the first goal and then right away the second goal and then third goal. We keep doing that we’re not going to last long. We’re not going to be a team that’s competing against other teams.”

The team put 37 shots on net but didn’t look like the team that is capable of dominating play. Credit as well to the Belleville team that has strung together a 15 game point streak that includes 11 wins. After 55 games there’s little time to talk about chances and shots. The mistakes and given up chances resulted in a bad game and a loss.

“We’re in the meat of the season right now and these teams are catching us and playing well,” Taylor said. “We just have to get our act together, we still have a lot of games left.”

The only thing they can do is put the loss behind them like they’ve done before and prepare for next week. Taylor said,Â “It’s going to be a very tough practice on Monday, I can tell you that.”

Remi Elie was scratched after it was determined in the pregame skate that he wasn’t able to play. He’s considered day to day with an injury. Tyler Randell was put into the lineup in his place. Randell was a part of the Saturday morning skate and stayed out for an extended time, a sign that he didn’t expect to play.

Lawrence Pilut was assigned back to the Amerks on Friday afternoon followed by CJ Smith being assigned on Saturday. Both players were in the lineup on Saturday night.

Pilut definitely looked a little off compared to the way he played previously. There’s no doubt that he’ll quickly get his American League timing back. With Pilut in the defensive scratch was Jack Dougherty.

Dalton Smith was the healthy forward scratch with CJ Smith back.