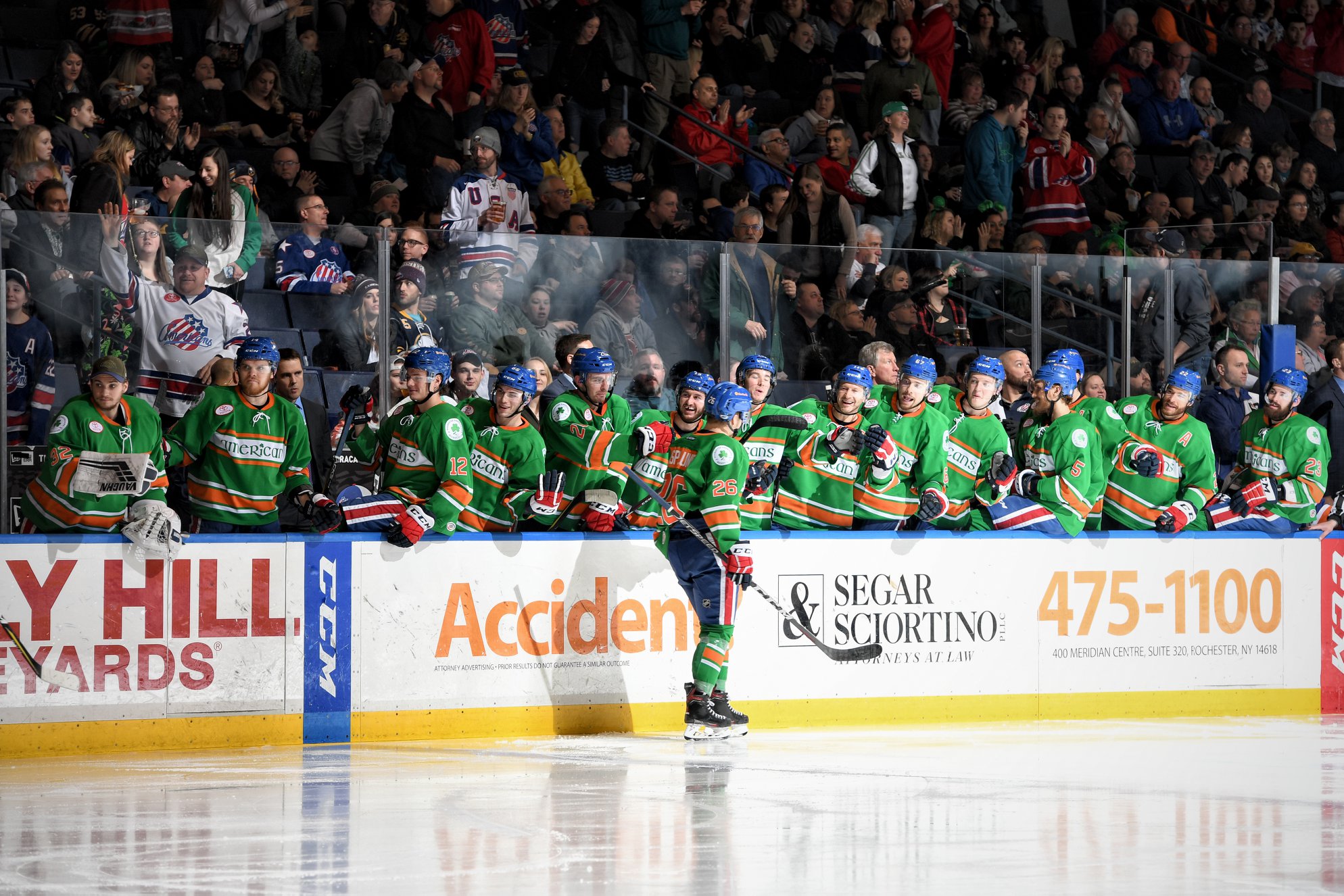 The interception by CJ Smith made this play happen. Kevin Porter finished it! Amerks went up 1-0. pic.twitter.com/giNKenm7x1

Nylander was in the perfect spot for that one to put the Amerks up 2-0. Primary assist to Oglevie. pic.twitter.com/ZFTuexTHJ0

We need to see more of this shot from Asplund!! That's a monkey off the back goal. Put the Amerks up 3-0. pic.twitter.com/LhBHFt074A

Oglevie slips right through, takes the pass, goal! Chased the goalie from the net. Amerks up 4-0. pic.twitter.com/PgVwEb70ue

Worked hard for this one! Asplund from O'Regan and it's 5-0. pic.twitter.com/RFUaqAETw1

(Rochester, NY) â€¦ With a pair of goals in each of the first and second periods, the Rochester Americans (36-18-3-2) grabbed a 4-0 lead 1:08 into the middle frame and never looked back on their way to a dominating 5-0 win over the visiting Bridgeport Sound Tigers (35-19-5-2) Friday night at The Blue Cross Arena. The flawless performance was the fourth this season by Amerks goaltenderÂ Scott Wedgewood, who tied a career-high by stopping all 27 shots he faced to keep the Amerks within two points of the Syracuse Crunch for first place in the AHLâ€™s North Division standings.

Along with the victory, the Amerks have collected 31 out of a possible 44 points in their last 22 games and have notched 39 points in their last 29 dating back to the day after Christmas. The win also gave Rochester the season-sweep over Bridgeport as they went a perfect 4-0-0-0 this season against the Sound Tigers.

ForwardÂ Kevin Porter, who returned to the Amerks lineup after missing the last three games, collected his fourth multi-point effort of the season as he opened the scoring to go with a helper, whileÂ Rasmus AsplundÂ headlined a night of firsts with his first multi-goal outing of the season.Â Will Borgen alsoÂ chipped in his first pro multi-point game with a two-assist night andÂ Andrew OglevieÂ also posted a pair of points (1+1), bringing his recent offensive outburst to eight points (4+4) over his last eight games.Â Alexander NylanderÂ completed the scoring as he recorded his career-best 11thÂ goal of the season.

Wedgewood drew the nod in the Rochester crease for the third straight game and seventh time in the last eight tilts. The sixth-year goaltender improved to 23-10-2 on the season and boasts a 14-4-1 record in his last 19 appearances dating back to Dec. 26. His four shutouts, which are third-most in the league, are the most for him since the 2013-14 season.

The Sound Tigers, who entered the matchup riding a season-long seven-game win streak and had points in 10 straight, were held off the scoreboard for just the second time this season while Mitchell Vande Sompel and Kieffer Bellows each had a team-high three shots. Goaltender Jeremy Smith made 17 saves in 21 minutes but was given the loss before being replaced by Mitch Gillam, who made his American Hockey League debut early in the middle period. Gillam stopped 17 shots in 39 minutes of relief action.

Less than nine minutes into the opening frame,Â C.J. Smith, who has 30 points (14+16) over his last 25 games dating back to Dec. 5, intercepted an outlet pass in the neutral zone. The Amerks reigning Rookie of the Year entered the Bridgeport end of the ice and exchanged passes with Porter before Rochesterâ€™s team captain tucked a shot inside the right leg of netminder to give the home club a 1-0 lead.

Just 1:32 after Porterâ€™s eighth marker of the year, Nylander ripped a shot under the crossbar to double Rochesterâ€™s lead at the 8:40 mark. The tally, the Swedish forwardâ€™s 11thof the season and third in the last three games, established a new career-high in both points (29) and goals. Oglevie and Borgen were given the assists on the goal that gave Rochester a 2-0 cushion going into the first intermission.

â€œIt was a good start, obviously,â€ said Amerks head coachÂ Chris Taylor. â€œWe had a good chance right off the opening face-off and when you get off to a good start, it just keeps building from there.â€

The Amerks, who carried a 16-6 shot-advantage in the second period, drew their first penalty of the night with 1:02 left to play in the opening frame. Rochester was unable to capitalize with the extra skater in the first half of the man-advantage but scored 19 seconds into the middle frame as a result of the carryover.

â€œIt was a great start for us,â€ Porter said. â€œWe got pucks deep and they were turning over pucks. We got pucks to the net and got a couple of early goals. To have a great start, especially at home where we havenâ€™t had the greatest starts, it was really good for us.â€

After collecting a pass in the middle of the ice to enter the Sound Tigers zone, Asplund quickly snapped a shot from atop the left face-off dot and beat Smith overtop the glove hand to push the Amerksâ€™ cushion to 3-0.Â Wayne Simpson, who also returned to the lineup after missing the previous three games, andÂ Lawrence PilutÂ recorded the assists on Oglevieâ€™s fourth goal of the season.

Rochester used its quick-strike offense for the second time of the night as Oglevie split the Bridgeport defensive pair and flipped shot overtop a sprawling Smith 1:08 into the frame. The marker, which put an early end to the Sound Tigers goaltender, was Oglevieâ€™s fourth of the campaign. Porter andÂ Andrew MacWilliamÂ picked up the helpers.

The Amerks took the four-goal advantage into the final period of regulation and finished off the scoring as Asplund was awarded his second tally of the night at the 11:54 mark fromÂ Danny Oâ€™ReganÂ and Borgen.

â€œIt was a huge win for us,â€ Asplund said after his first-career two-goal game. â€œBridgeport is one of the best teams in the league and we knew we had to play our best game. We really did play a good game.â€

Bridgeport posted a game-high 11 shots on Wedgewood over the final 20 minutes of play but the netminder turned aside all the rubber he faced to record the 5-0 shutout victory.

â€œBridgeport is a great team,â€ Wedgewood explained. â€œTo get the lead early and then play a full 60-minute game, it was a good win. We wanted to do that and make this a difficult place for opponents to play.â€

Rochesterâ€™s weekend continues on Saturday, Mar. 9 with the first of back-to-back meetings against the intrastate rival Binghamton Devils at the Floyd L. Maines Veterans Memorial Arena. Following the 7:05 p.m. matchup, the same two teams are slated to meet again in Rochester as the home-and-home series shifts to The Blue Cross Arena for a 3:05 p.m. matinee. Both games will be carried live on The Sports Leader AM 950/95.7 FM ESPN Rochester as well as AHLTV.