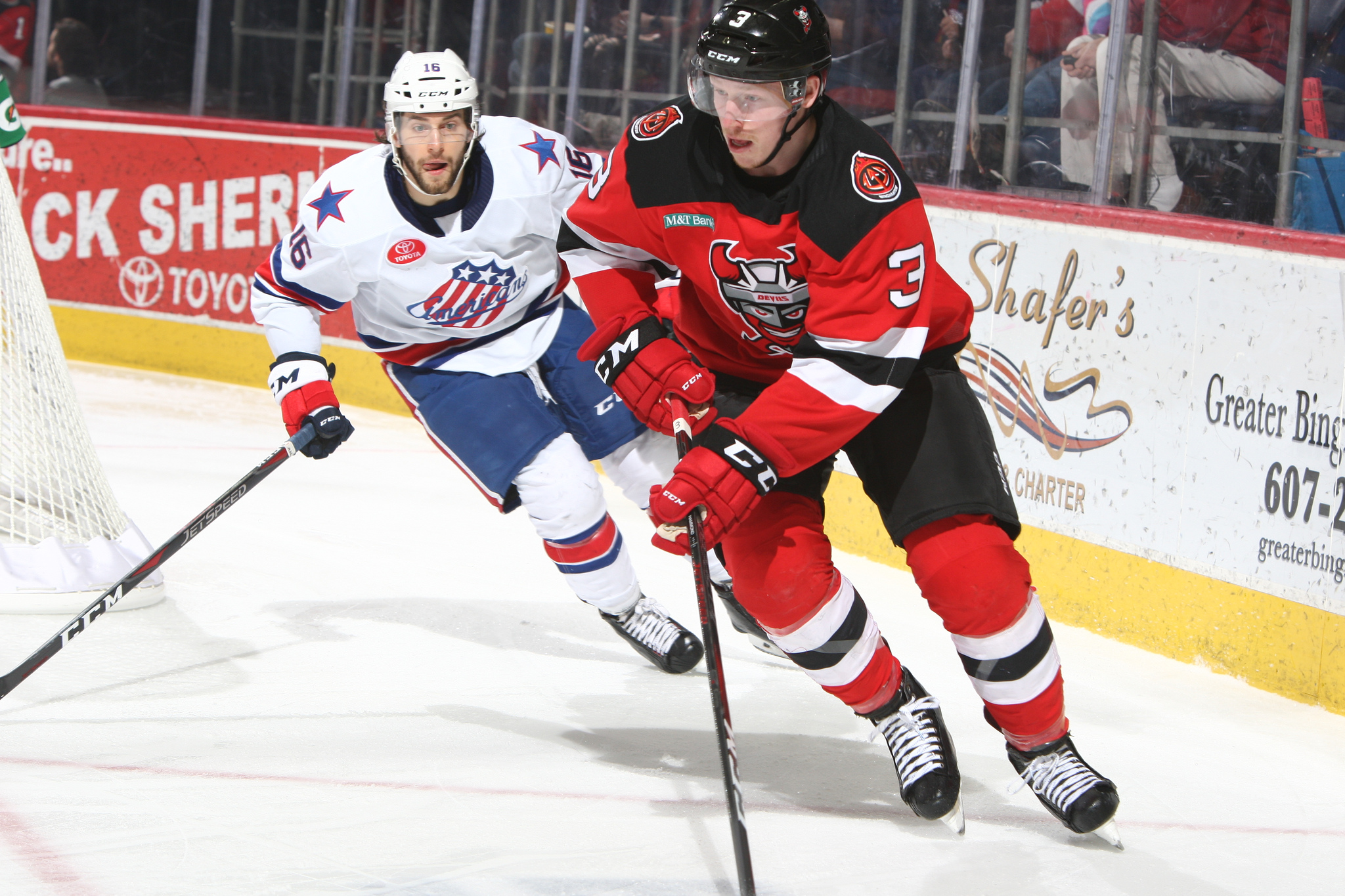 The road win in Binghamton wasn’t the easiest and the team wasn’t too happy with their performance but the end result is what matters most. After gaining an early two goal lead the Devils tied the game and made the Amerks work for the win. Two goals from Victor Olofsson in the last five minutes of the third period followed by a Taylor Leier empty net goal with 36 seconds left in the third sealed the win.

Taylor Leier from Alex Nylander and the #Amerks are up 1-0! pic.twitter.com/zvQcaPCcU8

Moments after Bingo tied the game at 2 the #Amerks took back the lead. Drop pass from Asplund to Olofsson and it's a 3-2 game! pic.twitter.com/UrKtCeEjfh

#GOALOfsson has the #Amerks up 4-2 after this goal late in the 2nd. O'Regan knew where he'd be. pic.twitter.com/a5nBWDMebd

(Binghamton, NY) â€¦ On the strength of a pair of goals from forwardsÂ Taylor LeierÂ andVictor Olofsson, as well as a two-point (1+1) night fromÂ Alexander Nylander, the Rochester Americans (37-18-3-2) won their fifth straight road contest by a 5-3 score over the Binghamton Devils (24-33-5-0) Saturday at Floyd L. Maines Veterans Memorial Arena. It was the seventh meeting between the intrastate rivals this season and the first of two on the weekend as the Amerks look to complete the sweep on Sunday afternoon when the home-and-home series shifts up to Rochester.

Along with the win, which keeps the Amerks within a point of the Syracuse Crunch for the first place in the AHLâ€™s North Division standings, the team has collected 33 out of a possible 46 points in its last 23 games. The victory also gave Rochester points in 12 of the last 16 games against the Devils dating back to the start of the 2017-18 slate. The Amerks show a 9-4-2-1 record during that span.

While Leier and Olofsson each tallied a pair of goals in the win,Â Rasmus Asplund, who had his first multi-goal of the season last night, added two assist tonight as didÂ Danny Oâ€™Regan. Nylander extended his goal-scoring streak to four games as he scored his fourth during that span and 12thÂ of the campaign to go with an assist while goaltenderÂ Adam WilcoxÂ improved to 10-7-3 on the slate as he made 30 saves.

Despite a two-assist night from Ryan Murphy, and goals from Sam Kurker, Marian Studenic and Nikita Popugaev, Binghamton dropped its fifth straight game and 10thÂ in its last 11 games. Netminder Cam Johnson made his fourth appearance in the last five games but suffered the loss while stopping 25 of the 29 shots he faced.

On the ensuing shift after Binghamton tied the game at two during the latter portion of the middle period, the line trio of Asplund, Oâ€™Regan and Olofsson were quick to reclaim the Amerksâ€™ lead as Asplund and Oâ€™Regan set-up Olofsson at the 15:55 mark.

Before the end of the second period and with a 3-2 cushion, Oâ€™Regan handed Olofsson a centering pass in-between the face-off dots in the Devils zone and Olofsson doubled the lead going into the intermission. The marker, which eventually held up as the game-winner, was his team-leading 23rdÂ of the season 50thÂ point overall. He became the first Amerk to reach the 50-point mark since Cole Schneider during the 2016-17 campaign.

It was also his eighth game-winner of the season, putting him one off the AHL lead behind only teammateÂ Zach Redmond.

Despite facing a 4-2 deficit, Binghamton, which had 12 players on recalls to New Jersey coming into the matchup, made things interesting during the final 20 minutes of play as Kurker made it one-goal game at the 6:44 mark.

The scored remained the same until Leier, who appeared in his 300thÂ professional game, sealed the 5-3 win as he scored into a vacant net with 36 seconds left in regulation fromKevin Porter. The assist was Porterâ€™s 200thÂ of his AHL career.

Binghamton responded with a pair of goals of its own to begin the second stanza, but Rochester countered back with another pair from Olofsson to take a 4-2 lead before adding an empty-netter in the third period.

After a quick turnaround, the Amerks and Devils close out the weekend on Sunday afternoon in Rochester as the home-and-home series shifts to The Blue Cross Arena. The 3:05 p.m. matinee will be carried live on The Sports Leader AM 950/95.7 FM ESPN Rochester as well as AHLTV. The matchup will also be televised locally on MSG.