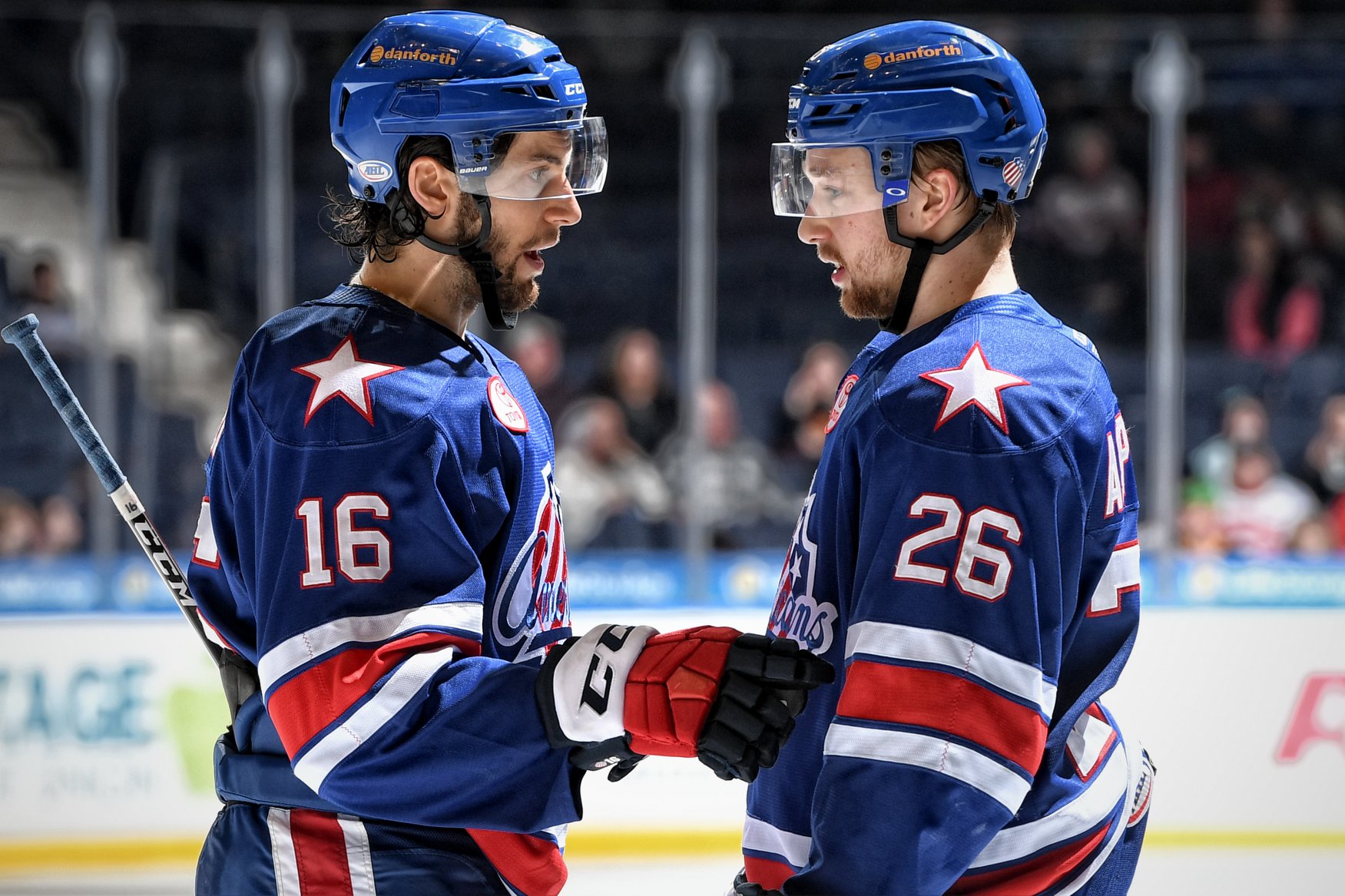 Finishing a set of three games with three regulation wins in less than 48 hours along with losing an hour of sleep is something the team is satisfied with. The Amerks took a few too many penalties on Sunday but it didn’t slow them down from putting six goals up on the Devils to win 6-1 on home ice.

Three regulation wins for the weekend and outscored the opponents 16-4.

Leier shot that one with some heat! Amerks up 1-0 pic.twitter.com/L0cz0wa4UE

Elie with the shortie to put the Amerks up 2-0! pic.twitter.com/MAiL1Je5n3

Tennyson gives the Amerks a pretty good 3-0 lead in the first. pic.twitter.com/t3VI5F2iVL

Rochester, home of the rare 5 min major for interference. pic.twitter.com/8EIXyxb5nd

Popugaev ruins the chance for another Wedgewood shutout. Amerks still up 3-1 pic.twitter.com/hG6rn7fqZ8

CJ Smith the #goalieslayer scores his 21st of the season on a breakaway off the long pass from Redmond! pic.twitter.com/SjJOjlVVUM

Rasmus Asplund gets his 7th point of the weekend (3G+4A) and puts the Amerks up 6-1! pic.twitter.com/q2HwGk44vB

(Rochester, NY) â€¦ With his third multi-point effort in the last three games,Â Rasmus AsplundÂ led the Rochester Americans (38-18-3-2) to a 6-1 thrashing over the Binghamton Devils (24-34-5-0) Sunday at The Blue Cross Arena, putting the finishing touches on a perfect three-win weekend for the Amerks.

Along with the win, the Amerks regained the top spot in the AHLâ€™s North Division standings over the Syracuse Crunch, despite the Crunch having a game in hand. Rochester has now collected 35 out of a possible 48 points in its last 24 games. The victory also gave Rochester points in 13 of the last 17 games against the Devils dating back to the start of the 2017-18 season. The Amerks show a 10-4-2-1 record during that span.

While Asplund added three points (1+2),Â Taylor LeierÂ andÂ Remi ElieÂ each recorded a goal and an assist.Â Matt Tennyson,Â Lawrence PilutÂ andÂ C.J. SmithÂ all completed the scoring while goaltenderÂ Scott WedgewoodÂ improved to 24-10-2-3 on the season as he stopped 18 of 19 shots. The sixth-year pro boasts 15-4-1 record in his last 20 appearances dating back to Dec. 26.

Nikita Popugaev extended his point streak to three games for Binghamton, which dropped 11 of its last 12 games, including six straight. Netminder Evan Cormier made his third appearance in the last six games but suffered the loss while making 26 saves.

With three goals in a span of 6:05, the Amerks jumped out to a commanding 3-0 lead before carrying it into the first intermission.

As Elie entered the offensive zone along the near boards, he dished a centering pass to Leier. The forward, who has seven points (5+2) over his last five games, fired a shot from the right face-off dot and it snuck between the arm and body of Cormier to give the Amerks a 1-0 lead at the 11:02 mark.

Later in the opening period, Rochester took a four-minute elbowing penalty but Leier and Elie teamed up yet again as Leier forced a turnover at the Amerks blueline. The puck caromed into the Devils zone and Elie tracked down the loose puck before picking the upper corner for his sixth of the campaign.

The Amerks added their third of the opening frame just 2:20 after their 11thÂ shorthanded tally of the season, which is fifth-most in the AHL, when Tennyson buried his fourth of the slate.

â€œWe did a good job in securing an early lead,â€ said Leier after the Amerks outscored their opponents 7-0 in the first period over the three games this weekend. â€œIt was good to establish that home-ice dominance we have wanted lately.â€

â€œIt was a good building block for us and hopefully we can continue to keep it going down the stretch,â€ Leier added.

Binghamton got on the board early in the second period, but Rochester responded with its own power-play goal to reclaim its three-goal cushion at the 18:23 mark. Parked atop the point in the Devils zone, Pilut blasted a one-time feed fromÂ Danny Oâ€™ReganÂ for his fourth goal of the season and first since Nov. 18.

â€œMyself, Asplund and Oâ€™Regan have some good chemistry lately, and â€˜Reegsâ€™ gave me a good pass and I saw an open lane,â€ Pilut said when describing his power-play marker. â€œWhen I got the puck, I just tried to shoot it through the lane.â€

Rochester tacked on two more tallies during the final frame as Smith netted his 21stÂ of the season and Asplund booked his third goal of the weekend and sixth of the slate.

â€œI am feeling pretty good,â€ said Asplund after posting seven points (4+3) this weekend. â€œThe confidence is there and the whole team is playing well. My linemates (Oâ€™Regan andVictor Olofsson) and the team are playing well, and itâ€™s easy to ride the wave of momentum.â€

The Amerks closed out the weekend with a perfect 3-0-0-0 record and a 16-4 goal differential, which included outscoring the opposition 11-1 at home.

â€œWe had good goal-scoring from a lot of different guys,â€ Amerks head coachÂ Chris Taylorsaid. â€œWe are feeding off one another and we are getting some timely goals. I donâ€™t think that we played well today, but we had some big goals and it solidified the win.â€

â€œWe have a good group of guys, who enjoy playing alongside with one another,â€ said Pilut. â€œItâ€™s a lot of fun and we are playing with a lot of chemistry. Itâ€™s definitely a good feeling lately.â€

The Amerks return to action on Wednesday, March 13 as they conclude their season-series against the Utica Comets with a 7:05 p.m. North Division showdown. The contest from The Blue Cross Arena will be carried live on The Sports Leader AM 950/95.7 FM ESPN Rochester as well as AHLTV.