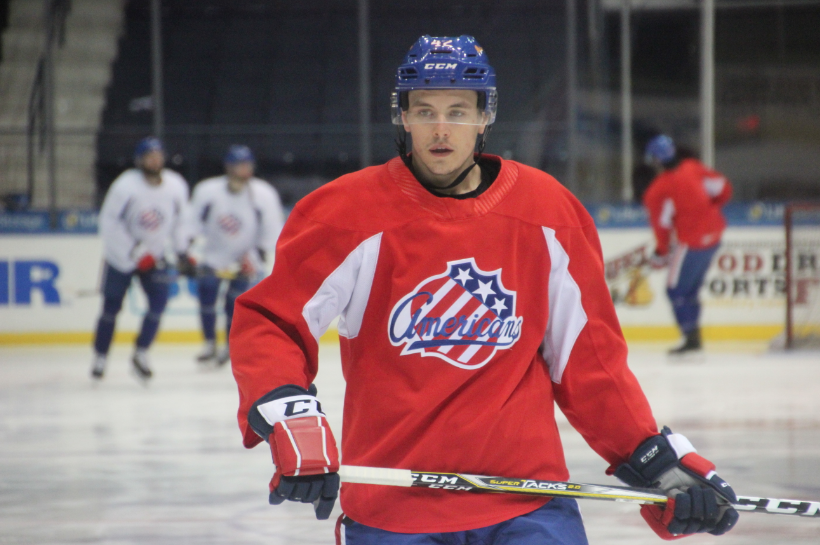 The Rochester Americans will have a player making his American League debut tonight when Kurt Gosselin suits up and plays defense against the Lehigh Valley Phantoms. Gosselin was signed on March 13th to an ATO (Amateur Tryout Contract) to finish the remainder of the season and also sign an AHL contract for the 2019/2020 season.

He just finished his senior season at University of Alabama-Huntsville where he was studying marketing and communications, played well, and was given an opportunity to sign a pro contract and take a step in his hockey career. Gosselin fits the mold of the type of player the organization is looking for coming out of college and was also the team captain.

“I always thought that I was going to have a future in hockey,” Gosselin said when I asked if he was ever unsure if pro hockey would work out. “If I was going to play I was going to be really excited. If I couldn’t I had some things lined up to be successful off the ice. I’m just really excited that it worked out, I really wasn’t thinking about it too much just making sure I got my school work done.”

The 24 year old had 15 points (4G+11A) in 25 games in his senior year at college. Through just five games with the Cyclones he already has 7 points (5G+2A). That’s a pretty good transition already scoring more goals in fewer games as a pro.

“I had a few teams interested,” Gosselin said when asked if there were other options available to him. “I think this organization was going to fit me best, was going to give me the best opportunity to succeed, hopefully move up. So far it’s been good and I’m just enjoying every step in the road.”

Scoring five goals in his first seven games matches up with the type of player he describes himself as saying, “I’d considered myself to be an offensive defenseman. I’ve learned in the pro game that you have to be play both sides of the puck too so I’ve been working on my defense side of the game and it’s coming along strong.”

“He likes to join the rush, has good speed,” Chris Taylor said when asked what he knows about Gosselin so far. “From what I’ve heard he likes to join the rush a lot so we have to make sure we hone him in on that type of play. I’m sure he’ll be nervous, no question, everybody is. He’ll do well and we want to control his emotions and get him into a game.”

One reason that Gosselin was called up is that the Amerks are currently without three key defensemen – Zach Redmond, Lawrence Pilut, and Will Borgen. Redmond is out with a lower body injury (day to day). Pilut and Borgen are called up to the Sabres. Without puck moving defensemen Redmond and Pilut there’s an opportunity for Gosselin to play a key role.

“I’m just really excited to be here, really grateful for the opportunity,” Gosselin said after the morning skate. “I’m just so happy to be able to come up here, play for these guys, and get a win for them.”

A surprising thing is that there aren’t any direct connections between Gosselin and the current roster. That’s not a bad thing, just surprising. There’s almost always a direct connection where someone has played with someone else somewhere along the way. He said he’s probably played against others but it’s a new team and new friendships.

“Have fun, enjoy it, put a smile on your face, and stick to the details,” is what Gosselin said the coaches told him leading up his first game here.

Where he’ll fit on the depth chart going into next season is unknown at this time but he’s already made an impression in Cincinnati and now he’ll get a chance in Rochester. Playing for high performing playoff teams hasn’t gone unnoticed. Gosselin said,Â “To be able to play on a team that’s high in the standings is an awesome experience and great opportunity for me.”

Judd Peterson is also expected be in the lineup again for the Amerks tonight playing on the wing. He caught wind of the possible moved Sunday that it would be possible. Laying in bed Monday morning after a stretch for four games in five days his phone rang and Matt Thomas, Cyclones coach, called him and said to pack his bags.

“Hopefully I can just do what I’m asked, play hard, and help the team win,” Peterson said.

“It’s fun. We have a good group of guys down in Cincinnati and obviously a good group of guys here. It’s a winning culture everywhere you go in this organization, hopefully Buffalo will keep building up, it’s nice to be a part of both teams that are going toi be playing in the playoffs and have something to play for.”

A year and a few days ago Peterson left college to begin his professional career and he’s been a key piece of the first place Cyclones roster. Like Gosselin, he’s a depth player that will continue to play to prove his value at the next highest level.

“It’s a lot different. I came in last year not knowing what to expect with pro hockey, all the games in the season as a pro. This year I got my feet wet and get used to it, adjusted to it, and so far I like it,” he said when I asked about his adjustment over the past year. “I like staying in the game routine rather in college where it’s a lot of practice and you play two games a week. So far I’ve loved it and playing a lot of games is fun.”

He laughed when I said and you’re getting paid versus studying.

Will Borgen is a friend and former teammate also left college at the same time to begin his pro career, they played three seasons together at St Cloud State.

Peterson said he gave him a big hug because they haven’t seen each other in a few months and was excited for a friend to get his first NHL call up and mentioned how special it is for Borgen to get his NHL debut.

With only six defenseman in the locker room there’ll be a lot of minutes available for everyone on the blue line to step up and play. Look for Nathan Paetsch to get some lead power play time as well. I also wouldn’t be surprised if they went with five forwards on the power play depending on how things are going.

The Amerks can officially clinch a playoff spot tonight with a regulation win and a Belleville loss in Syracuse tonight. Amerks assistant coach Gord Dineen said, “We would have liked to have done it a couple weeks ago.” The goal is still chasing first place and clinching on their own terms with a win.

Puck drops at 7:05pm against Lehigh Valley, first of only four regular season home games remaining before the playoffs.