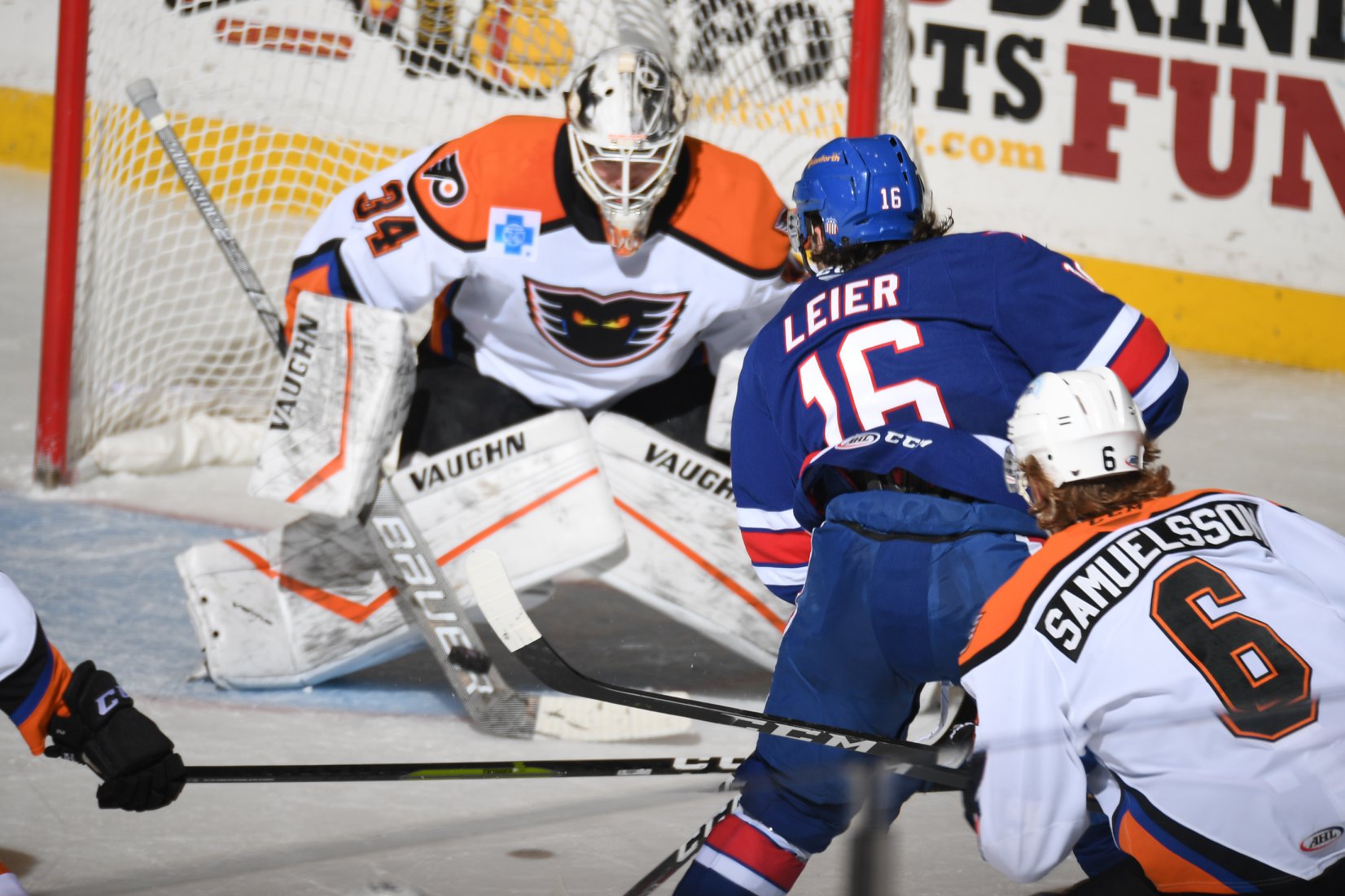 It wasn’t the best of games but it also wasn’t the worst of games. At this time of year giving up any points when you’re still chasing first place is less than ideal though. The Amerks erased a two goal deficit but it wasn’t enough as they went on to lose 4-3 in overtime to the Phantoms.

The lineup card hasn’t been played at all this season but this one felt like the team really was missing many key pieces. Victor Olofsson was called up to the Buffalo Sabres less than two hours before game time. CJ Smith started the game but left early when he wasn’t feeling 100% from being sick this week. They’re missing three key defensemen in Lawrence Pilut, Will Borgen, and Zach Redmond who is still injured. That’s five players, three of which are leading defensemen.

Taylor Leier filled in on the line with Asplund and O’Regan and scored late in the first period with a low shot at the hash marks. It only took 42 seconds for the Phantoms to score after a broken play down low.

Pascal Laberge scored twice for Lehigh Valley in the second period after two costly turnovers to give the Phantoms a 3-1 lead. Scott Wedgewood was pulled after the second goal and replaced by Adam Wilcox. The two shots by Laberge were both up high on Wedgewood. The first turnover was an attempt to enter the offensive zone by Sean Malone and Judd Peterson when it was turned over and taken down ice by Laberge. The second was a lost puck battle behind the net that allowed Lehigh to gain possession and Laberge found some open ice.

Kevin Porter lead a rush across the blue line, fed a quick pass to Eric Cornel on his right, and Cornel was able to squeeze a shot past Phantoms goalie Alex Lyon and the Amerks were within one.

The drop pass entry on the power play is a move that everyone loves to dislike but when it’s executed and leads to a goal it’s great. Wayne Simpson crossed the blue line with the puck, a quick pass to Kyle Criscuolo near the boards, and Kevin Porter went to the net and was able to tip a shot into the net and tie the game.

It only takes one mistake playing in overtime and that’s what happened when Gosselin and Criscuolo took each other out of the play and created a two man breakaway for the Phantoms and Laberge scored his third of the night for the game winning goal.

There were shots, chances, and battling back from being down. The team will get another chance to officially clinch a playoff spot this weekend.

Leier scores his 20th of the season! #Amerks up 1-0. Fits right in on the line with Asplund and O'Regan. pic.twitter.com/LF4bN4mPJv

Pascal Laberge finds an opening and put the Phantoms up 2-1. pic.twitter.com/P2ohOV3itc

Phantoms won the battle behind the net and another goal for Laberge. Second of the period for him. pic.twitter.com/p8Hi5Pq1Xd

Cornel from Porter and the Amerks are only down by one. pic.twitter.com/SJ6Mupxtst

The drop pass can work!! Kevin Porter tips the puck and scores a PP goal, it's a 3-3 tie game. pic.twitter.com/pGfSVZMAKp

Phantoms win 4-3 in overtime. Easy to see how this two on zero rush started. pic.twitter.com/uMEfoS1diA

Longer recap with quotes from Amerks.com

Despite the overtime loss, which gave Rochester a 6-6-1-0 record in its last 14 meetings with the Phantoms, the Amerks remain just three points behind the Syracuse Crunch for the AHLâ€™s North Division lead. The team has also earned 42 out of a possible 62 points in its last 31 games going into the final two games of March.

Forward and Amerks team-captainÂ Kevin PorterÂ notched his fifth two-point game of the season as he tallied his 10thÂ goal of the season to go with an assist whileÂ Eric CornelÂ and former PhantomÂ Taylor LeierÂ each found the back of the net.Â Adam WilcoxÂ (11-8-3) suffered the overtime loss despite making 13 saves in 30 minutes after replacingÂ Scott WedgewoodÂ with 7:33 left in the second period.

Pascal Laberge turned in his first-career hat-trick to go with a helper on Mark Friedmanâ€™s goal to extend the Phantoms point streak to four games while Chris Conner added a season-high three assists. Goaltender Alex Lyon, who made a career-high 49 saves in the first meeting between the two teams earlier this year, stopped 40 of the 43 shots he faced to even his record to 15-15-3 on the season.

Lehigh Valley grabbed a 3-1 lead 12:27 into the second period to end Wedgewoodâ€™s night, but the Amerks trimmed the deficit in half as Cornel tallied his eighth goal of the year with 5:00 to go in the middle stanza.

As Porter was sprung into the offensive zone thanks to an outlet pass fromÂ Jack Dougherty, the veteran center dished a pass to Cornel in the right circle. Cornel calmly kicked the puck from his skate to his stick before tucking a shot in-between the left pad and right post to make it one-goal game going into the third.

Rochester continued to eye the equalizer as they fired a game-high 15 shots on Lyon during the final period and were rewarded as Porter deflected a centering pass fromÂ Kyle CriscuoloÂ 4:01 into the frame while on the power play.

â€œAs the power-play was winding down, â€˜Simmerâ€™ (Wayne Simpson) kicked the puck out to â€˜Criscoâ€™ and I just drove towards the net,â€ described Porter of his eighth goal of the season. â€œCrisco made a great pass and I didnâ€™t really do much as the puck just banked off my stick, but Iâ€™ll take it.â€

The two teams traded chances over the final 16 minutes of regulation, but the game required overtime to determine a winner for the second straight game.

â€œI thought we had lot of chances,â€ said Amerks head coachÂ Chris Taylor. â€œWe just couldnâ€™t get the puck behind their goaltender. I loved our energy for coming home as it was better than the last couple of games here.â€

â€œWe had chances to win the game but just came up short as we had a lot of new players in the lineup and I thought they played well.â€

Neither the Amerks nor the Phantoms generated much in the early portion of the extra frame, but Lehigh Valley caught a break as they picked up a loose puck inside their own and quickly skated away on a 2-on-0 rush towards Wilcox.

Conner and Laberge exchanged a series of passes, and despite an impressive last-ditch back-checking effort byÂ Remi Elie, Laberge slipped the puck over the goal-line at the 2:02 mark to give the Phantoms the 4-3 overtime victory.

The two clubs went into the first period tied at one as Leier, who became the fourth different Rochester skater this season to join the 20-goal club, and Friedman each scored 42 seconds apart.

â€œIt felt good to score against them,â€ said Leier, who appeared in 226 games with Lehigh Valley to begin his pro career prior to the midseason trade that landed him in Rochester. â€œWe had the puck in their zone for quite a bit of time, and after (Matt)Â Tennysonâ€™s shot got blocked, it came right to me in the slot and I kind of got lucky as it went five-hole.â€

Laberge added a pair of tallies to give Lehigh Valley a 3-1 cushion at the 12:27 mark of the middle stanza, but the Amerks recorded a pair of markers in the final two periods to force the game beyond regulation.

â€œI felt pretty comfortable out there,â€ said rookie defensemanÂ Kurt Gosselin, who made his Amerks/AHL debut after earning a promotion from the Cincinnati Cyclones (ECHL) yesterday. â€œAs the game went on, I started to get my own feel for it out there. Itâ€™s disappointing as we didnâ€™t get the results we wanted, but Iâ€™m glad to get the first game out of the way.â€

The Amerks close out the home portion of the month as they host the Laval Rocket on Friday, March 29 at The Blue Cross Arena before closing out March on Saturday against the Binghamton Devils at Floyd L. Maines Veterans Arena. Both matchups are set for 7:05 p.m. and will be carried live on The Sports Leader AM 950/95.7 FM ESPN Rochester as well as AHLTV.