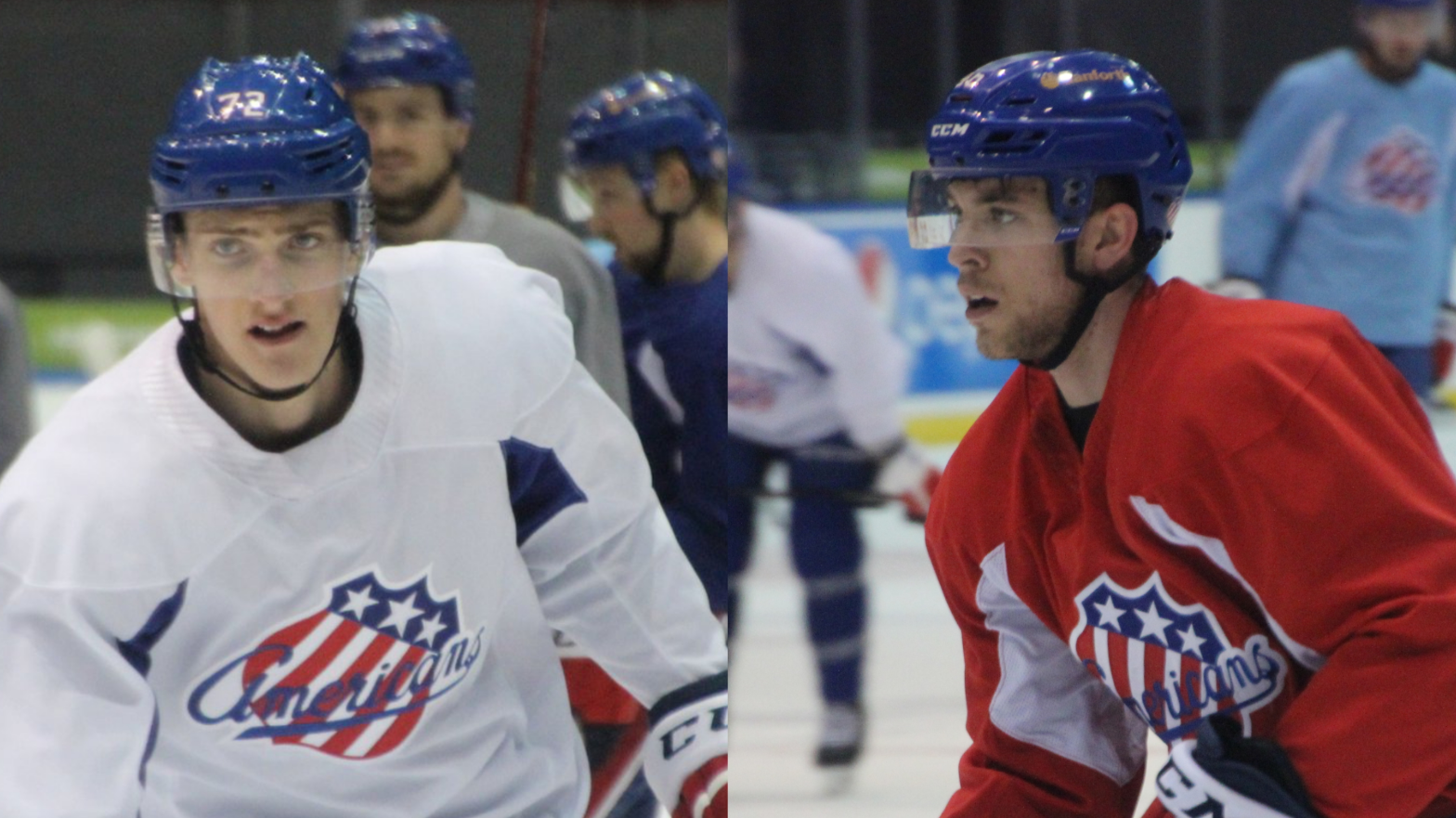 It’s the time of year for minor league hockey teams to experience a lot of roster change. Players being called up, sent down, draft picks out of college, draft picks out of juniors, and even undrafted free agents. Nine players will have passed through Rochester as part of a transaction this week. One has made an Amerks debut and two more are expected to debut this weekend.

Defenseman Kurt Gosselin played his first AHL game on Wednesday night, Tage Thompson was assigned from Buffalo on Thursday and is expected to play tonight, and defenseman Casey Fitzgerald who finished his senior season at Boston College and hopes to play in one of the two weekend games.

phew. That’s a lot of movement.

The Amerks will have the chance to clinch a playoff spot tonight with a win and Cleveland loss and continue to play meaningful games – something that’ll be new to Tage Thompson this season.

“I’m excited obviously, you said it there, meaningful games,” Thompson said after practice on Thursday. “The Amerks have had a great season and I’m excited to be a part of it. The atmosphere in the room is great and the guys are great. I know a lot of them previously from skating with them in the summer up in Buffalo.”

“I’m excited for him to play in meaningful games and big minutes. I want him to go out there and challenge people,” Amerks coach Chris Taylor said. “Mistakes are going to happen, games are full of mistakes, and I want him to know that he’s going to go right back out there and correct those mistakes. It’s how he responds from those. I want him to keep going and have fun while he’s here.”

The season has been full of mistakes in Buffalo. In terms of play, Tage Thompson should have been playing in Rochester earlier in the season to learn from those mistakes on an individual level and work on his game.

Thompson talked about the challenges in Buffalo and staying positive saying, “It’s always tough when you run into adversity like that and obviously frustrating. A lot of the guys struggling to find the back of the net, not getting results. You never want to see that especially when you’re putting in the work. Guys inside the room see how hard each other is working every day. When you’re not getting the results it’s frustrating but I think that’s when you just have to dig deeper, find a way to win, and I think if you just stick to that work ethic it’s going to come. It’s nice to see success down here, a positive group down here, and I’m excited to be a part of it and help them win.”

When a new player joins a team they can be hesitant or an observer. That didn’t apply to Tage on Thursday. It helps that he already knows a lot of the players and the coaches from camps.

Taylor said, “I liked what I saw today. He had good enthusiasm. He was laughing but he’s working hard. That’s what we want. We want him to have fun when he comes down here but working hard and doing what he needs to do.”

He was also doing a lot of talking on the ice. “I think talking is the best way to get comfortable. I think today was just breaking the barrier, getting to know guys a little better, and the coaching staff too,” Thompson said. “I think when you’re talking and positive out there it makes you feel a lot more comfortable, help relax, and play your game.”

Thompson is going to be expected to create offense and will get the chance skating on the top line with Kevin Porter and CJ Smith.

“There’s going to be some pressure on him. We’ve had a pretty good year. When he comes down he’s a new guy and wants to fit in and see where he’s at. It’s a good pressure to have,” Taylor said of expectations. “I think he adds a huge element to our team that we didn’t have with the size, reach, skating, and he can use his body a lot more down low. He adds a new dimension to our hockey team which is great.”

One of these is taller than all of the others. pic.twitter.com/xrN01CFDJd

Thompson found out at the trade deadline that he was going to be assigned to Rochester to adjust and get his feet wet without having to jump right into the playoffs. In other words, the move this week wasn’t a surprise to him.

Playoff hockey isn’t new to Thompson either. He said, “Right when I came out of school I played on the Chicago Wolves when they were in their playoff stint and had a good learning experience. Didn’t play much but had a lot of behind the scenes watching. It’s intense hockey, ramps up, and I’m excited to be a part of it.”

A willingness to be assigned, play whatever role he’s given, and embrace the opportunity is all that can be asked of an NHL player being sent down to the American League for the first time in late March. Just as Victor Olofsson, Will Borgen, and Alex Nylander are getting a bigger taste of the NHL it’ll be an AHL experience for Tage Thompson.

Thompson was asked what Buffalo said him when he was assigned and he said, “Just come down, play some big games, some important games, hopefully be a big part of this team, and win a cup here.”

He’ll have the chance to win another championship with a former teammate, Casey Fitzgerald. They both played together at the 2017 World Junior U-20 Championships tournament where they won gold with Team USA. Thursday was also the first Amerks practice for both of them.

Thompson on seeing a familiar face, “Casey’s a great guy, great player, and great to see him again.”

“Was awesome having a familiar face in the locker room,” Casey Fitzgerald said after practice.

Another connection that Fitzgerald will have is that he was roommates with Lawrence Pilut last summer at the Buffalo Sabres development camp. It was the third development camp for Fitzgerald and with that experience he made sure to reach out to younger or first time players at camp to help to make sure everyone was interacting as a group. Arriving in the Rochester locker room wasn’t unfamiliar territory. He already knows Asplund, Olofsson, Nylander, Cornel, Pekar, Oglevie, Hickey, and Pilut.

“I’m so grateful for the opportunity to be here. I’m excited and have met a lot of the guys so far, great group of guys here,” Casey Fitzgerald said after practice. “It shows with their success and the culture they have here is a testament to that. I’m excited to come into the winning culture here, learn from these games, hopefully hop in, provide, and play my best.”

Fitzgerald described his play saying, “Two way defenseman. I like to get up the ice help join the play, a good puck moving breakout defenseman. I can make a good first pass and help support the rush with a good stick.”

Chris Taylor knows Fitzgerald as well from camps and talked about his first practice saying, “We want to see where these guys are at physically and where they fit in to our team. We’ll see if we can get him into a game this weekend.”

“With my season I kept it in the back of my head and watched these guys and have seen how they’ve been doing,” Fitzgerald said when asked if he’s paid attention to Rochester at all this season. “A lot of success here and I think a big part of that is the culture. I’ve been here a day and you can just see the culture here is a fun atmosphere.”

Talking more about the learning aspect he said, “It’s one of those things that you can’t learn until you experience it. I’m grateful to be here and learn from the coaches here. Just to learn to know what it takes to play a pro schedule, the long schedule, how the guys manage themselves, and how they help their bodies to bring their best everyday is something I’m trying to soak in here.”

Casey Fitzgerald isn’t just learning to be a pro hockey player but is learning with school work as well. He’s taking two classes and finishing up his psychology degree to graduate from Boston College.

The Rochester Americans only have three home games left in the regular season starting tonight against Laval Rocket. They’re coming off of a 5-4 overtime loss on Wednesday night.

CJ Smith missed a majority of the game on Wednesday due to illness. He’s been sick all week but is hopeful to play Friday night.

Zach Redmond remains out with a lower body injury. He’s considered day to day but isn’t expected to play this weekend. Andrew Oglevie is also out of the lineup on the injured list.

Matt Tennyson was a late call up to Buffalo on Thursday afternoon. Arvin Atwal was called up from Cincinnati as his replacement. We’ll find out around game time if he plays or the coaches are confident enough to put Fitzgerald right in.

If CJ Smith can play the only expected lineup change Friday night with forwards would be Tage Thompson playing and Tyler Randell being scratched.