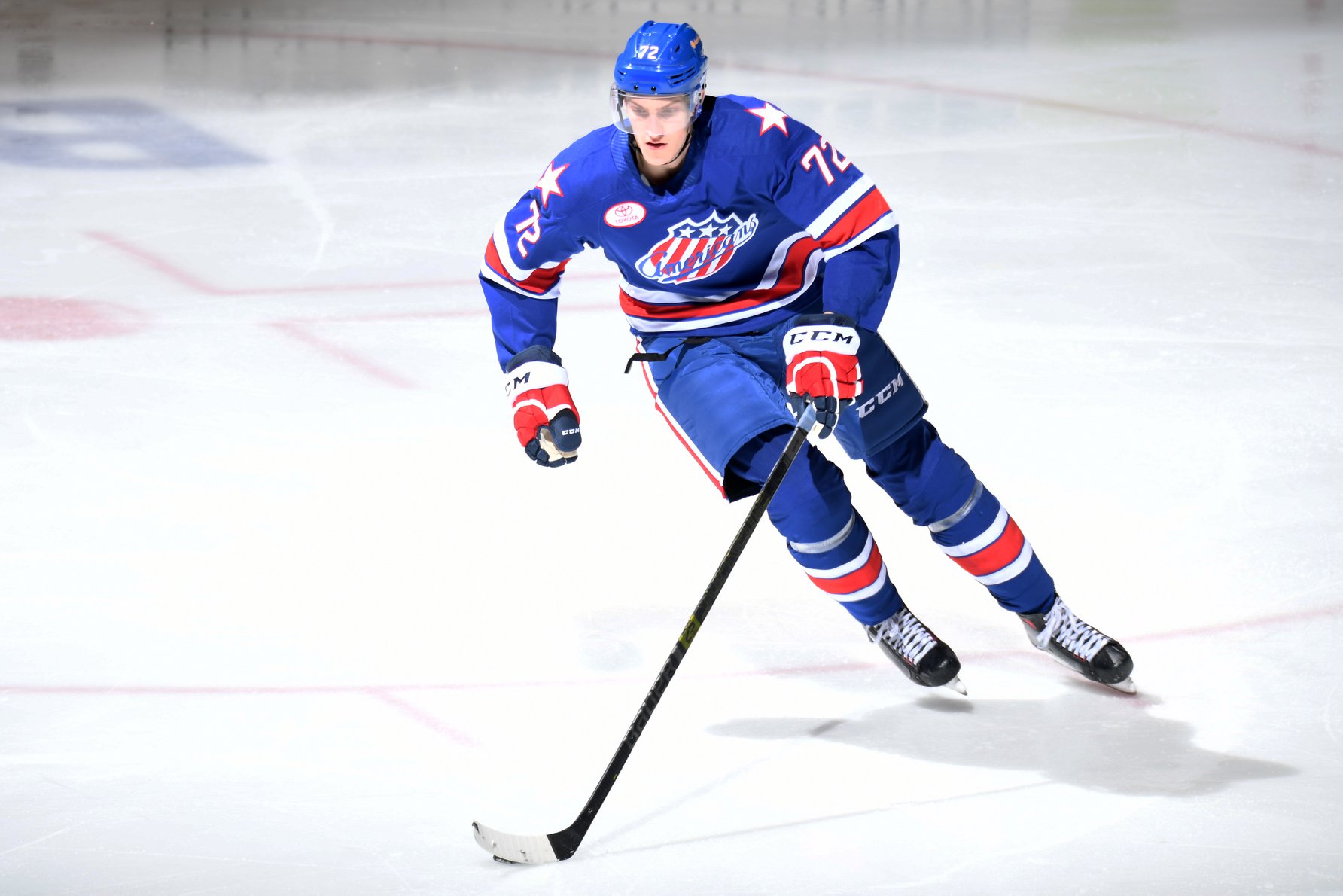 Tage Thompson was the center of attention Friday night in Rochester. He has spent all season with the Buffalo Sabres and after 65 games played in the NHL he was assigned to the Rochester Americans this week. You could say it’s where he should’ve been months ago, you could call it a demotion, or you could also call it a fresh start to his season. He’d just playing where he’s assigned.

By the end of the game he delivered a memorable performance. Some bad plays, some questionable, a shattered stick, a penalty, but more importantly two goals and an assist. The game winning goal and the insurance empty net goal. The Amerks won 4-2, are now within a point of first place in the North Division, and only one point away from clinching a playoff spot.

“That we got two points,” is what Chris Taylor said with a smile when asked what he liked about the game. “I really didn’t like our first that much but I thought our second and third was good. Our second was really good.”

As excited as Thompson was to come to Rochester in play he was also a little nervous. After the game Thompson said, “I think there’s butterflies every game no matter what league you play in, I think it’s just part of the game. I think once you touch the puck and get that first shift out of the way you settle in and can relax to play your game.”

It took a little longer than the first puck touch and first shift to really find his groove, could be said for most of the team, but once it happened the team was in control of the game. Thompson had a reputation in Buffalo for toe drag turnovers, shots getting blocked, and coughing up the puck. Once those three things happened he was playing a new game.

“Feels good getting back out there on the ice,” Tage Thompson said after the game. “I feel like any player if you make a mistake you want to be able to correct it right away. I was fortunate enough to be able to do that tonight. I think the first period was a little slow for everyone and myself included wasn’t where I wanted to be. I think in the second we had a good response and the third was even better.”

For two seasons Chris Taylor and the coaching staff have talked about the benefits of being able to make mistakes, learn from them, and go back out for your next shift to recover from them. The way the game started for Thompson there’s probably some out there who said or thought there’s no way he should be playing.

Sean Malone scored the first goal for Rochester at 9:56 of the first period on a delayed penalty. Brandon Hickey shot the puck wide to the left side of the net and it popped out on the right side where Malone was able to pull the puck to the front of the net from the goal line and score.

Maybe a door was open and created a tail wind. That puck had some lift to it.

“I’m sure he’d want that one play back with the penalty but those are nerves and he got a lot of ice time that he’s not used to,” Chris Taylor said. “I think he’s going to keep getting better and better every game.”

The only goal in the second period was scored with 2:08 left in the period when Danny O’Regan blasted a shot from just below the face off circle past Michael McNiven on the power play. Thompson beat a Laval player to the puck in the corner forcing it along the boards. Remi Elie sent a pass around the boards to O’Regan who skated to just below the face off circle and let a shot rip over the shoulder of McNiven.

Alex Belzile scored just 29 seconds into the third period and tie the game 2-2. It was a combination of two mistakes. Nathan Paetsch chased Daniel Audette around the back of the net and as he did it left an opening in front. Thompson was up closer to the point and Taylor said that he should’ve dropped back a little more but it was also on Paetsch who shouldn’t have chased the puck behind the net.

Still, that didn’t get either player glued to the bench.

Thompson scored what would be the game winning goal at 8:37 of the third period by redirecting an Arvin Atwal shot from the blue line. Andrew MacWilliam had the secondary assist. Positioned in the right place, stick in the right place, and the puck went into the net.

“Obviously you want to be contributing as much as possible to the team and helping them win in any way,” Thompson said. “Whether that’s playing a lot of minutes or limited minutes it doesn’t matter. It definitely feels nice to play some minutes.”

Kevin Porter and Nathan Paetsch battled behind Adam Wilcox for the puck, Paetsch sent it up ice, and Thompson launched the puck this time low to the ice and straight into the net. Insurance goal with 6.4 seconds remaining in the game.

Does one game indicate Thompson will be a dominate player going forward? Chris Taylor said, “I don’t think just because you’re in the NHL that you’re going to be dominate down here. It takes some time. We expect to have four lines dominating. It’s a hard league. We don’t expect anyone from the NHL to come down and dominate. We just expect them to work hard and keep getting better.”

Chris Taylor ran through a long list of things that Thompson needs to get better at talking about wall play, angles, PK, confidence on the power play, shooting, and face offs. He added, “All of those things need to get better and we want him to get better so that he’s ready for next year.”

“I would like to be,” Thompson said when asked about being a dominate player. “Any league you play in you want to be a dominate player. I don’t think you go in just hoping to cruise by. It was nice to get some puck touches and that confidence back in my game.”

Thompson doesn’t have any concerns about joining this Amerks team late in the season. He said, “It’s easy to step into an atmosphere and environment where it’s positive everyday.”

A few other notes:

* Adam Wilcox made 17 saves for the win and was stellar all night. The first goal was the result of a player being tackled on top of him and the second was the broken play described above. Glove saves, pad saves, stick saves, and sprawling saves.

* When Danny O’Regan scored it was his 20th goal of the season. This is the first season since 2000/2001 that the Amerks have had at least five players score 20 or more goals.

* The 35 shots the Amerks registered on net was pretty good and then there were a lot of blocked shots.

Chris Taylor talked about the blocked shots saying, “I think that’s good on our part because it means we had the puck a lot, we were shooting a lot, and we created a lot of offense so they had to create a lot of blocked shots. For me that just tells me that our team was skating on pucks on doing a good job in the offensive zone.”

* One is the magic number. Rochester only needs one point to officially clinch a playoff spot. They’re also only one point back of the first place Syracuse Crunch as of writing this. The Amerks are in Binghamton for a 7:05pm road game to close out the month of March.

Dougherty to Hickey to Malone last night put the Amerks up 1-0. Hickey may have intended to hit the net but it went wide and still worked out. He may have planned that as well. pic.twitter.com/hZxRmXsp86

Tage Thompson redirect on the shot by Arvin Atwal for his first goal of the night. pic.twitter.com/gB5sQSo2LP

Tage Thompson didn't air mail this one out of play. Low and into the net for the empty net insurance goal. Amerks won 4-2. pic.twitter.com/eDaCJfy2fG

Not surprising that a late hit on CJ Smith wasn't called. Lower right. psstt.. Tayls, send it in! Was a hug fest instead of a fight but Kurt Gosselin addressed the situation with the Laval player. pic.twitter.com/Wh9sh1owKN