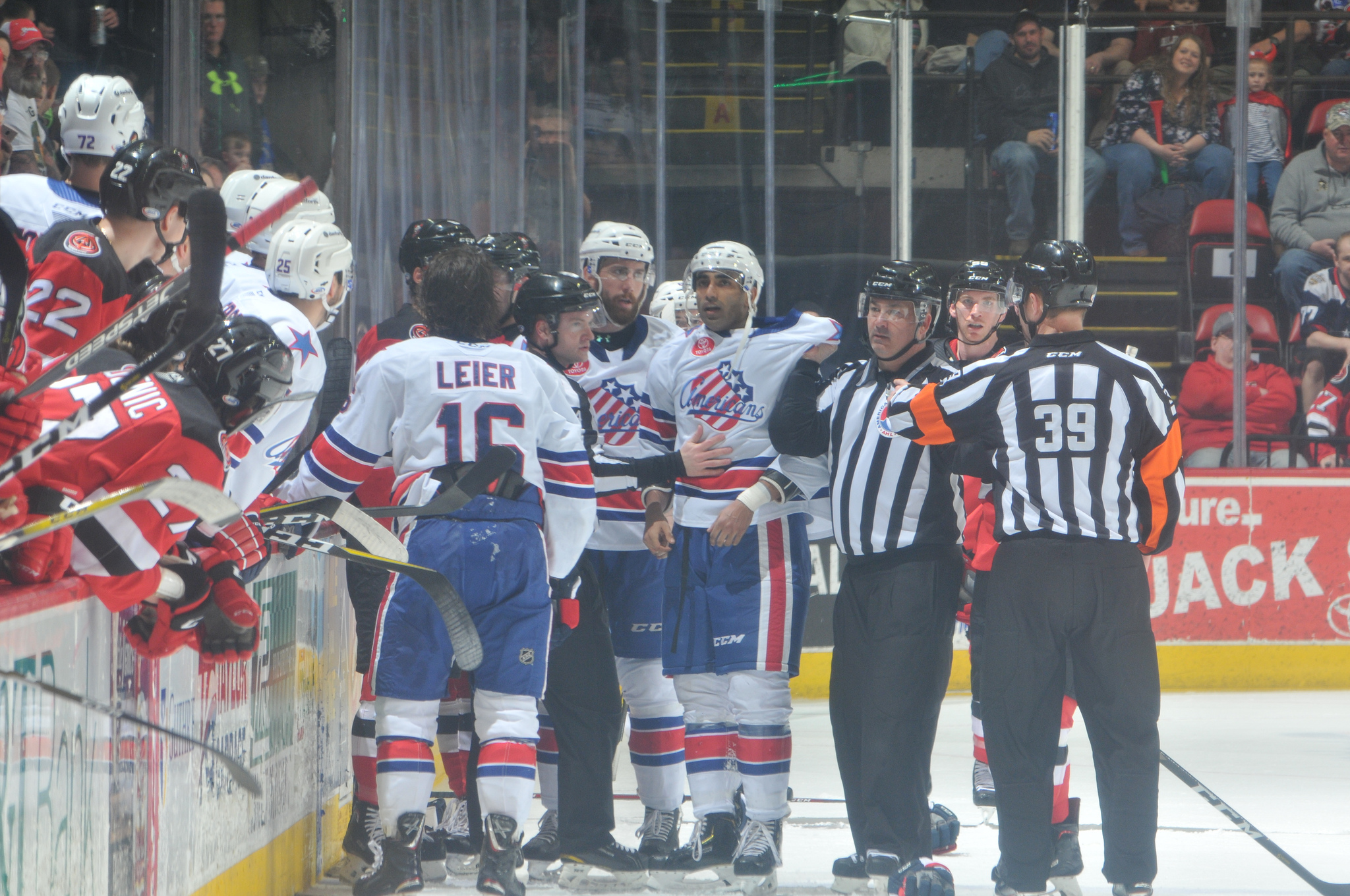 It took a little longer than the team had hoped but the Rochester Americans clinched a spot in the 2019 Calder Cup Playoffs on their own terms. The team wanted to clinch a spot with a win, not based on other teams losing. Four goals in the third period completed the 6-4 comeback win in Binghamton on Saturday and punched their ticket into the playoffs. The Amerks finished the game with 47 shots and five different Amerks players had multiple points in the game.

Tage Thompson scored in his second game for his third goal with Rochester and Casey Fitzgerald played his first professional game and tallied two assists, one on the game winning goal.

Binghamton had already been eliminated from the playoffs which is always an indication in the American League that a team can’t be taken lightly. They’re still playing for pride and also playing to act as spoilers. Binghamton scored three goals in the first period, two on the power play.

Scott Wedgewood had been pulled in his two previous starts after giving up early goals but would stay in net to finish the game and get his 27th win of the season.

Tage Thompson was able to knock down a breakout pass attempt by Binghamton from behind their own net, quickly control the puck, and put it past goalie Cam Johnson. It’s safe to say teams in the future aren’t going to try and pass like that anywhere near Thompson. In two games with Rochester he has 4 points (3G+1A).

Rochester had a 21-9 advantage in shots in the first period but Cam Johnson was the difference maker stopping all but one.

CJ Smith scored the only goal of the second period with a low shot on the ice that went between the pads of Johnson. CJ Smith was getting bumped along the left side of the ice but still controlled his lane, the puck, and got off a shot. Arvin Atwal started the play with a poke check at the blue line sending the puck to CJ Smith who took off down ice.

There were 26 penalty minutes handed out late in the second period when there was a big hit by Taylor Leier at center ice on J.D. Dudek. Colton White took offense to the hit and challenged Leier. Arvin Atwal was skating in to help Leier out and as he was doing so he was tackled by Brett Seney. Atwal and Seney went to the ice before getting up and exchanging punches. Seney earned himself 17 penalty minutes (Misconduct – Instigating 10 min, Fighting – 5 min, and Instigating – 2 min). Atwal also had five for fighting, and Leier had two for rouging. Rochester earned a power play.

Going into the third period it was still a 3-2 game but the Amerks weren’t done playing, and never were throughout the game. Five on five they were the better team.

CJ Smith scored his second goal of the game to tie the game 3-3 at 10:42 of the third period. Kevin Porter and Nathan Paetsch earned assists on the play and CJ Smith scored between the legs of Johnson again.

About 20 seconds later John Quenneville put a shot off the corner of the Amerks net that was going to be reviewed at the next stoppage in play. There was no call on the ice at the time.

Play continued and Binghamton sent the puck into the Amerks end for a line change. Casey Fitzgerald took control of the puck behind the Amerks, passed the puck to Brandon Hickey on the boards, and Hickey sent Remi Elie down ice who scored from the left side.

The shot by Binghamton was reviewed, no goal, Rochester goal. The two Amerks goals were scored 51 seconds apart and they took their first lead of the game.

Ryan Schmelzer tied the game less than two minutes later when Wedgewood wasn’t able to cover a loose puck in front of the crease. Egor Sharangovich got a stick on the puck and Schmelzer was able to score.

Eric Cornel scored the game winning goal with 96 seconds left in the game by redirecting a Kyle Criscuolo shot from the blue line. Casey Fitzgerald had his second assist of the night by winning a battle along the boards that allowed Criscuolo to get off the shot.

The way this game was going it wasn’t over yet.

Kevin Porter and Eric Cornel were able to tie up their guys during a defensive zone face off with less than 20 seconds to play. Porter had a first puck touch on the face off, Cornel had his stick on it next and was able to get it away from the face off dot for Nathan Paetsch to score his first goal of the season into an empty net. That sealed the comeback win.

Danny O’Regan did not play in the third period. As of writing this it’s unknown why. He finished a regular shift at the end of the second period and appeared ok.

Casey Fitzgerald played in his first professional game and earned two assists. Jack Dougherty was the defenseman out of the lineup.

Rochester doesn’t play again until next weekend with a home game Friday vs Syracuse and then road game Saturday in Syracuse. Syracuse is one point ahead of the Amerks in the standings and plays on Wednesday at Belleville. Rochester and Syracuse want to win the division title, it could be a deciding weekend.

Here’s the game in gifs:

Bingo takes an early 1-0 lead on the PP. pic.twitter.com/13RtcFyzOr

Bingo took offense to a clean hit at the blue line from Arvin Atwal. Amerks get a PP out of this! pic.twitter.com/e6ZFKjWGML

Another view of the goal. Standard place to hang out, used his size, blocked the pass, scored. 3rd goal in 2 games for Tage. pic.twitter.com/nRr8SLE80M

Bingo scores another PP goal and they take a 2-1 lead. pic.twitter.com/e4DMy2XdMu

woof. Bingo goes up 3-1 in the last minute of the first. A back hand shot like that needs to be saved. pic.twitter.com/Lwt4eQuaFn

Started with this hit by Leier at center ice. pic.twitter.com/p4idn7hfdA

And then Seney flew in to stop Atwal from helping out Leier. pic.twitter.com/VoBCTMVfnI

Another look at the Elie goal. Casey Fitzgerald got his first pro point with an assist! pic.twitter.com/hY98jaabED

Full play of Casey Fitzgerald earning his first pro point with a secondary assist on the Remi Elie goal. pic.twitter.com/SmQS6Y17Jd