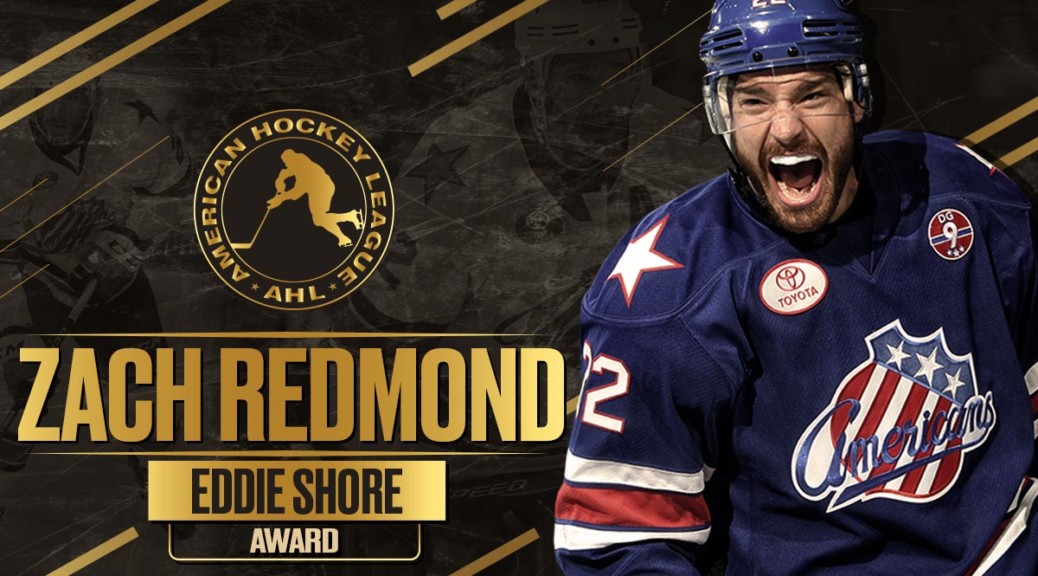 SPRINGFIELD, Mass.Â â€¦ The American Hockey League announced today thatÂ Zach RedmondÂ of the Rochester Americans is the winner of theÂ Eddie Shore AwardÂ as the AHLâ€™s outstanding defenseman for the 2018-19 season.

The award is voted on by coaches, players and members of the media in each of the leagueâ€™s 31 cities.

Redmond finished the 2018-19 regular season with career-best totals of 21 goals (tops among all AHL defensemen) and 50 points, along with a plus-13 rating in just 58 games for the Americans, who finished with the fourth-best record in the AHL. He tied for the overall league lead with nine game-winning tallies and ranked first among blueliners with 10 power-play goals (tied) and 200 shots on goal. Redmond, who broke a 46-year-old franchise record for goals by a defenseman in a single season, was also voted a First Team AHL All-Star this season following a Second Team selection in 2017-18. He joins AHL Hall of Famer Steve Kraftcheck (1959) and Hockey Hall of Famer Al Arbour (1965) as the only Amerks ever to receive the Eddie Shore Award.

An eighth-year pro from Traverse City, Mich., Redmond has totaled 65 goals and 132 assists for 197 points in 314 career AHL games, as well as nine goals and 29 assists in 133 NHL contests with Buffalo, Montreal, Colorado and Winnipeg. Redmond, who has successfully resumed his career following a potentially life-threatening laceration to his femoral artery in 2013, was drafted by the Atlanta Thrashers in 2008 and was acquired by Buffalo in a trade with Montreal on Oct. 4, 2017.

In operation since 1936, the American Hockey League continues to serve as the top development league for all 31 National Hockey League teams. Nearly 90 percent of all players competing in the NHL are AHL graduates, and through the years the American Hockey League has been home to more than 100 honored members of the Hockey Hall of Fame. Sixteen clubs will continue to vie for the leagueâ€™s coveted championship trophy when the 2019 Calder Cup Playoffs get underway Wednesday.