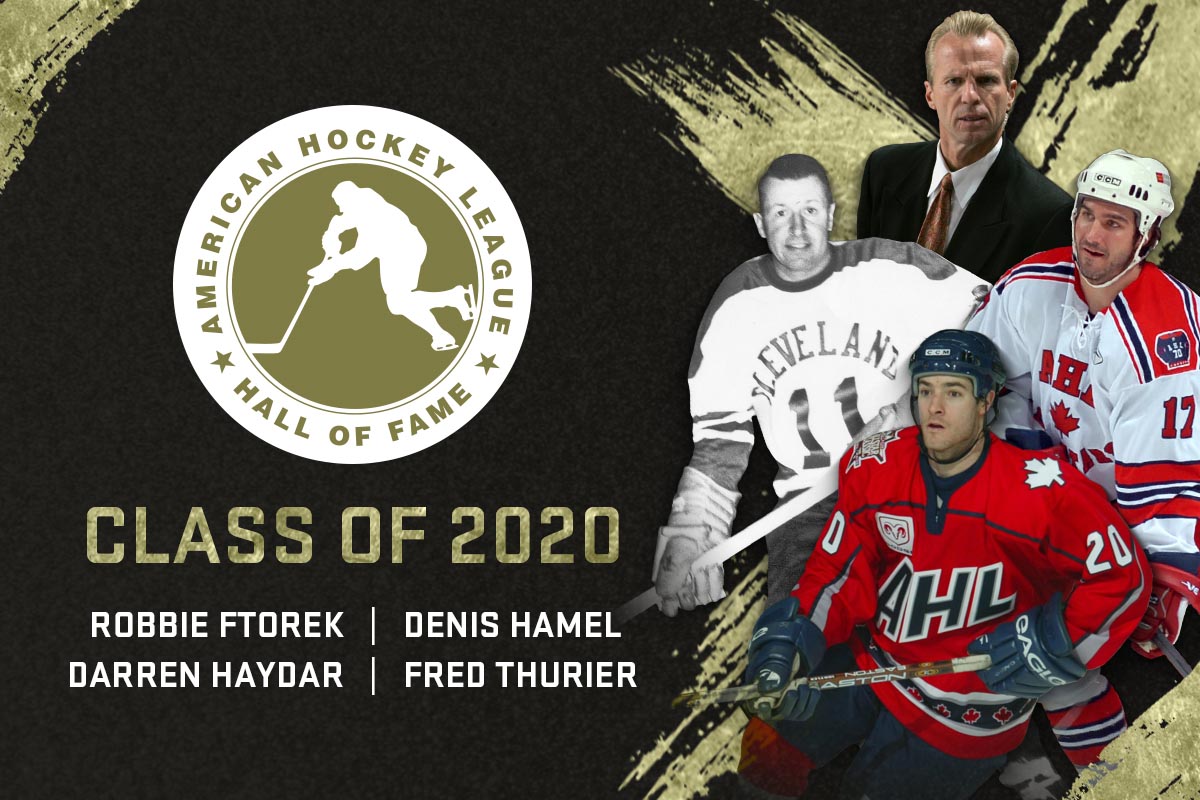 Denis Hamel started his career with the Rochester Americans in 1997 and is now joining Robbie Ftorek, Darren Haydar and Fred Thurier as part if the AHL Hall of Fame Class of 2020.

Below is the official release from the AHL:

â€œSince 1936, the history of the American Hockey League has been defined by the people who have helped build upon its foundation of excellence,â€ saidÂ David Andrews, AHL President and Chief Executive Officer. â€œEach of these four individuals performed at the highest levels throughout their careers, and the AHL Board of Governors unanimously endorses the Selection Committeeâ€™s recommendation for their induction into the American Hockey League Hall of Fame as the Class of 2020.â€

The Class of 2020 will be honored as part of the festivities at theÂ 2020 AHL All-Star Classic presented by Ontario International Airport, hosted by the Ontario Reign. The American Hockey League Hall of Fame Induction and Awards Ceremony is scheduled forÂ January 27, 2020.

Formed in 2006 to recognize, honor and celebrate individuals for their outstanding achievements and contributions in the American Hockey League, the AHL Hall of Fame is housed online atÂ www.ahlhalloffame.comÂ and is accessible to fans worldwide with the click of a mouse as part of the AHL Internet Network.

A veteran of nearly five decades in hockey as a player and coach,Â Robbie FtorekÂ successfully combined player development with winning during an impressive tenure behind American Hockey League benches.

A native of Needham, Massachusetts, Ftorek turned pro with the AHLâ€™s Virginia Wings in 1972, just months after winning a silver medal with the United States Olympic team in Sapporo, Japan. Ftorek would total 141 points in 138 AHL games over 13 pro seasons before signing on to serve as head coach of the New Haven Nighthawks in 1985.

Ftorek led New Haven to a pair of playoff appearances and was in first place on Dec. 9, 1987, when he was promoted to head coach of the NHLâ€™s Los Angeles Kings. After two seasons in L.A., Ftorek was named head coach of the AHLâ€™s Halifax Citadels, and earned another promotion to the NHL after just four months when he was elevated to an assistantâ€™s role with the Quebec Nordiques.

Ftorek joined the New Jersey Devils organization in 1991 and enjoyed his greatest AHL success. He won back-to-back Louis A.R. Pieri Awards as the leagueâ€™s outstanding coach, first in 1994-95 as he led the Albany River Rats to a Calder Cup championship, and then in 1995-96 on the strength of a 54-win, 115-point regular season, one of the best campaigns in league history. Ftorekâ€™s time guiding the Devilsâ€™ top prospects helped propel players like Martin Brodeur, Bill Guerin, Steve Sullivan, Scott Pellerin, Brian Rolston, Mike Dunham and Jay Pandolfo to lengthy NHL careers.

After turns running benches in New Jersey and Boston, Ftorek returned to the AHL and coached Albany again from 2003 to 2006. He currently ranks 11th all-time with 354 wins as an AHL head coach, and remains the only coach in the last 30 years to win the Pieri Award twice.

Denis HamelÂ was one of the American Hockey Leagueâ€™s most dangerous goal scorers over his 12 years on the circuit.

A native of Lachute, Quebec, Hamel broke into the pro ranks with the Rochester Americans in 1998 and helped the club reach back-to-back Calder Cup Finals, leading the team with 34 goals during the 1999-2000 season while also making the first of his three AHL All-Star Classic appearances.

Hamel also played 130 games with the Buffalo Sabres before signing with Ottawa in 2003, and his three years spent with the Binghamton Senators included a 91-point campaign in 2005-06 in which he also captured the Willie Marshall Award for leading the league with 56 goals.

NHL stints with Atlanta and Philadelphia followed before he returned to Binghamton in 2007; his first season back saw him selected to captain the Canadian AHL All-Star team at the event hosted by the Senators, and later earn the Yanick Dupre Memorial Award as AHL Man of the Year for his outstanding work in the Binghamton community.

Highly decorated, record-setting forwardÂ Darren HaydarÂ was a dominant performer over his 11 seasons in the American Hockey League.

The native of Milton, Ontario, made an immediate splash when he joined the Milwaukee Admirals in 2002-03, posting 75 points in 75 games and earning the Dudley (Red) Garrett Memorial Award as the AHLâ€™s outstanding rookie. The next year, Haydar followed a 59-point regular season by tallying 11 goals and 26 points in 22 postseason contests as Milwaukee captured its first Calder Cup championship.

Haydar helped the Admirals back to the Calder Cup Finals in 2006, potting 92 points in the regular season and 35 more in the playoffs. He then signed with the Atlanta Thrashers that offseason, setting the stage for one of the most memorable campaigns in AHL history.

Now with the Chicago Wolves, Haydar recorded a point in 39 consecutive contests to begin the 2006-07 season, averaging better than two points per game during the longest scoring streak in AHL history. He went on to lead the league with 122 points on the year and earn MVP honors before tallying 24 points in 15 playoff outings, finishing first overall in playoff scoring for the third time in four springs.

In 2007-08, Haydar wore the captainâ€™s â€œCâ€ for the Wolves and led them to a Calder Cup championship, on the way becoming the AHLâ€™s all-time leader in postseason goals and points. He spent one season in Grand Rapids and one in Cleveland before returning to Chicago for his final three years in the league.

The leading career scorer for both the Admiralsâ€™ and Wolvesâ€™ AHL franchises, Haydar totaled 788 points in his 780 regular-season AHL games, ranking 14th all-time in scoring and 10th in assists (496), and he remains the leagueâ€™s all-time leader in postseason goals (63) and points (143).

Fred ThurierÂ was one of the first bona fide stars in the fledgling days of the American Hockey League.

Thurierâ€™s pro debut came with the Springfield Indians in 1937, and two years he later he was the clubâ€™s leading scorer with 60 points in 54 games. Thurier was named a First Team AHL All-Star as he recorded 60 points in 41 games in 1940-41, and he added 44 points in just 22 AHL contests in 1941-42, splitting time between Springfield and the NHLâ€™s Brooklyn Americans.

The native of Granby, Quebec, missed parts of the next two seasons while enlisted in the Canadian Army during World War II, but quickly returned to dominance with the Buffalo Bisons. He scored 33 goals and totaled 73 points in only 39 games during the regular season and added 18 points in nine playoff contests as the Bisons rolled to the 1944 Calder Cup championship.

After skating for the New York Rangers in the NHL in 1944-45, Thurier finished his career over seven seasons with the AHLâ€™s Cleveland Barons. He helped the Barons to a Calder Cup in 1948 after scoring a personal-best 36 goals, and in the following years continued to climb the AHLâ€™s career leaderboard. On the final day of the 1950-51 season, Thurier notched both his 300th goal and his 700th point, becoming the first AHL player ever to reach either of those plateaus; a month later, Thurier and the Barons were Calder Cup champions again.

Freddie â€œThe Foxâ€ Thurier retired in 1952 with more points in professional hockey than any other player to date, including 319 goals, 425 assists and 744 points in 642 AHL games and a league-record 85 points in postseason play. Thurierâ€™s post-playing career didnâ€™t take him too far from the action; he served as an AHL linesman from 1953 to 1962.

[ PDF of press release with stats ]