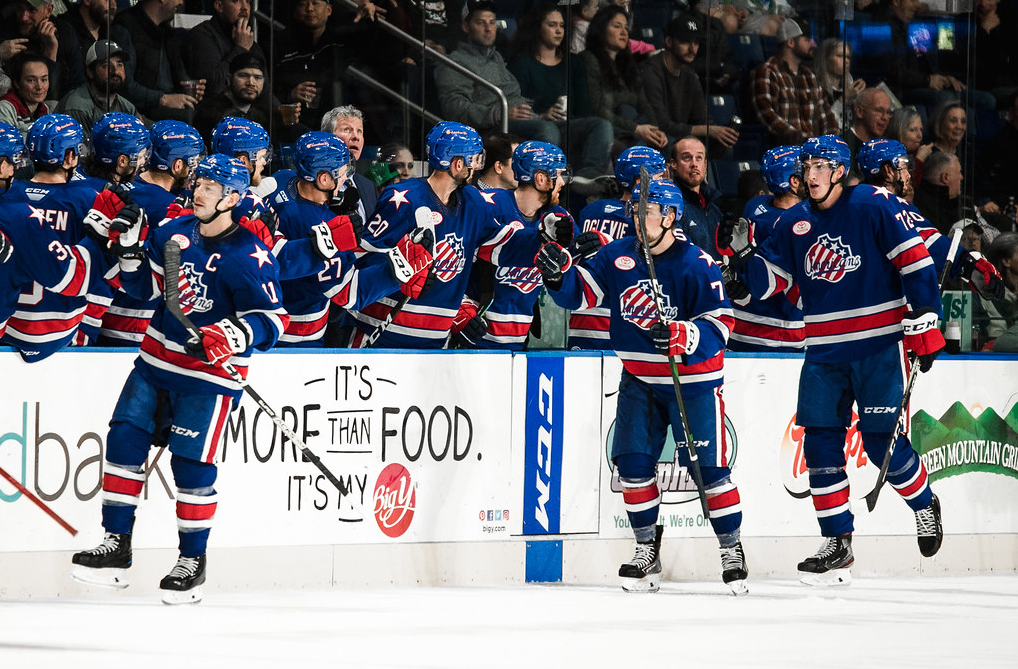 After a week off the Amerks took some time to get their game going and finished with a 2-1 win on the road in Springfield. Kevin Porter and Andrew Oglevie scored the goals and Andrew Hammond finished with 20 saves in the first road game of the season.

Tage Thompson was dominant again and was a leader offensively. Andrew Oglevie was another bright spot showing off his scoring capabilities.

A pretty uneventful period until the last 11 seconds when Springfield scored. Rochester had a 13-6 advantage in shots but few would be considered high quality scoring chances.

Brandon Hickey was in the penalty box for a cross checking penalty when Sebastian Repo scored with 11 seconds to go in the period. Repo took the puck down the side, around Nelson, in front of Hammond, ignored by Bryson, and scored.

The defensive breakdown is obvious when you watch the play unfold.

Sebastian Repo scores a PP goal with 11 seconds left in the first. Springfield up 1-0. pic.twitter.com/lgmOYkOOwc

A better period than the first resulted in better scoring chances and a goal as well. It was the Tage Thompson show creating all of the scoring opportunities.

Kevin Porter scored his first goal of the season at 12:27 of the second period on the power play. Zach Redmond (third assist of the season) started the play up ice and Thompson setup Porter for the one timer with a pass from the goal line.

Rochester had four power play chances in the second period and this was the only one they scored on. The first chance of the period they didn’t record any shots.

Captain Porter from Thompson on the PP! Amerks tie the game 1-1. pic.twitter.com/sUFwo8EhnA

That was the 100th point as an Amerk for Zach Redmond and it was also his 200th point in the American League.

Thompson had two other great scoring chances in the period. The first he wasn’t able to slip it through the pads and the second was just barely saved by a Springfield player from crossing the goal line.

Tage Thompson had a breakaway chance after a Springfield player over skated the puck. Couldn't slip it through the pads. pic.twitter.com/FZ80FELFhE

Thompson took the shot this time and almost scored on his own rebound. One man show. pic.twitter.com/PbDZp2IM0w

Defensively the team has played well through 40 minutes but creating offensive pressure on any line without Thompson has been a challenge.

The game improved as it progressed and that’s what you want. The team played better creating more chances in the third period and took control of the pace of the game.

Andrew Oglevie scored his second in as many games when Jacob Bryson sent him down ice for the odd man rush with Kevin Porter. Oglevie took the shot and buried it. That was also the first professional point for defenseman Jacob Bryson.

Rochester was firing as many shots as they could and played a strong defensive game in which Andrew Hammond finished with 20 saves.

Earlier in the period there was a two on none break for CJ Smith and Curtis Lazar but Chris Driedger was able to get a blocker on the puck.

Chris Driedger got his blocker in place to stop this one from CJ. Great video work to show how close the shot was and a good save. pic.twitter.com/VvOhl0YWgz

Here’s the final look at shot locations in the third period.

The team played a great defensive game and limited high quality chances for Springfield. The team had a lot of shots and won the game in regulation which is what counts after 60 minutes. Offensive chemistry will continue to grow and there’s no reason to raise any concerns after only two games.

It was the Tage Thompson show for the second game in a row. He setup Kevin Porter for the first goal of the game and was dominant all over the ice.

Andrew Oglevie is a name we didn’t get to hear enough of because of injuries last season but after two games we’re seeing what he may be capable of.

The next game is Saturday night in Providence before playing against Hartford Saturday afternoon.

Final look at shots. Amerks had a 40-21 advantage in the 2-1 win over Springfield. Those 3 shots from far distances are from Thompson. pic.twitter.com/3tLRrwqx1O