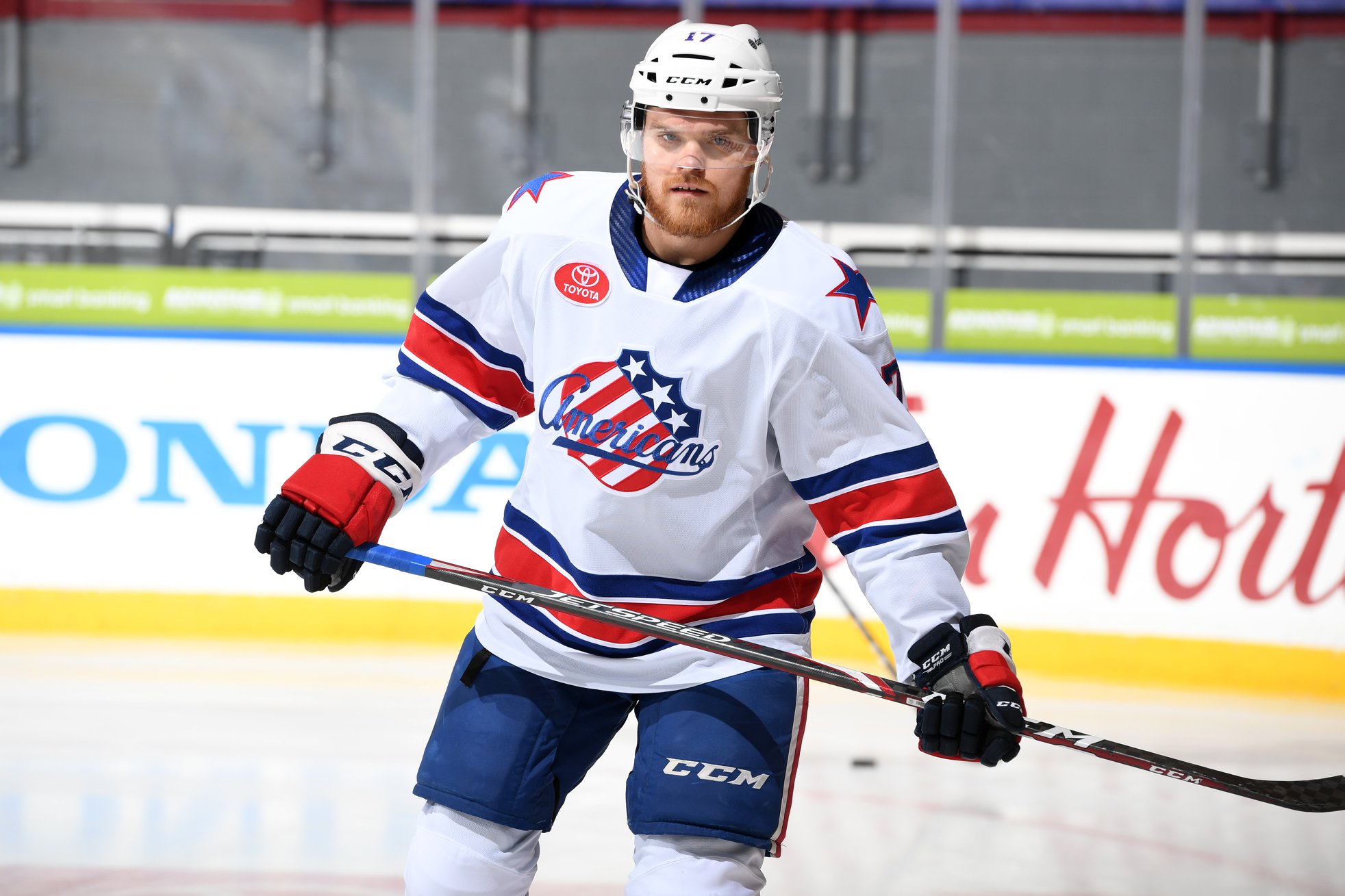 The Rochester Americans have played 10 games this season and one player that is off to a productive start is Sean ‘Mugsy’ Malone who just scored his third goal of the season Wednesday night. Through nine games played he has five points (3G+2A) and more importantly he’s off to a healthy fresh start.

The superstitious types could say part of it has to do with the number. After wearing the number 14 the last two seasons he now has 17 on the jersey.

“I wore it at school and it’s my favorite number so I thought I might as well get a new number and maybe some things will change,” Malone said about the new number. He had previous conversations with the equipment manager which resulted in a phone call over the summer to let Malone know that 17 was available if he wanted it.

Things have changed so we can say the return to a favorite number has worked. This has been the first healthy start to a professional season for Sean Malone. Leading into his rookie season he experienced an injury over the summer that delayed the start to his rookie season. For his second pro season he took a shot to the knee in a preseason game with the Buffalo Sabres that had him out of the lineup missing the first 12 games of the season.

“I think this is the first time I felt pretty good going into the year. Both years of my pro career have been long-term injuries and it’s just frustrating to start the season late and I think getting a full training camp and getting my conditioning up here is substantial,” Malone said. “The way I felt going into season and the confidence that comes with that I certainly feel a lot better now.”

Feeling better now is a different world compared to last season. It can’t be fun to talk about injuries for the third season in a row but it’s part of the story surrounding Malone. Also a part of his story that will stop being talked about.

The details of the multiple injuries he dealt with last season and the treatments he went through aren’t openly talked about for personal and professional reasons but he’s certainly received world class treatment and assistance from the organization.

Sitting out of games last season was a challenge. Once Malone started playing in early November last season he played in the next 24 of 25 games before things took the turn.

“You know, I really love this game and when you are out of it for a little bit it’s hard to come back especially mentally,” Malone said. “I think that the biggest struggle I had was just consistently coming back and confidence falls with that. You sort of get into this rhythm that is frustrating and disappointing at the same time.”

I asked if the injuries and mental part of the game lead to hesitation when he did play. Malone said, “It’s not necessarily relative to the injuries. It’s just the mental grind of being out line up and just showing up to the arena wanting to be in the locker room and being on the ice. You start to get isolated from the team and you know it’s hard but it’s your job. You want to perform and then sometimes it was a battle. It was just multiple things that kept compiling and I think this year I finally got it right. I got some work done and I felt a lot better going into this year.”

“This year I feel a little more comfortable being the third year guy. I know what to expect from the coaching staff and what they expect from myself. I’m familiar with the core guys that have been brought back here and you know I’m really excited for this year honestly just to hit the ground running right away.”

Training over the summer started off on a high note for Sean Malone and defenseman Frank Hora. The two of them played bantam hockey together with the AAA Hamburg Hawks. They were already skating together with Matt Ellis at Harborcenter when one day Hora showed up with Amerks gear. Hora let Malone know he signed an AHL contract with Rochester and that they could potentially be teammates again. Hora is playing with the Cincinnati Cyclones in the ECHL this season but for the remained of the summer and through training camp they were teammates again.

Sean Malone is also on an AHL contract for the first time this season after his NHL entry level deal expired.

“I don’t want to go into too many details about it but I think I think it means a lot that I was able to come back here and they wanted me back here. I think they have invested time in me so I have a lot of respect for that. I’m happy to do what I can to hopefully get back on an NHL deal. That’s my main goal but I think focusing on the things that I have to do here and actually develop my game and actually be consistently playing is a major factor in that.”

Malone saw another former teammate by the name of Colin Blackwell convert an AHL contract into an NHL deal after a healthy season of consistent production. The two of them played together in Rochester and also together at Harvard.

Malone proved what he can be as a player in his rookie season by playing in 76 consecutive games. He sat out the first three games of the season waiting for an opportunity to jump in the lineup and then never looked back. He played in the remaining 73 regular season games and then all three playoff games. He was relied on to be a gritty defensive player. When games were close whether it was working to hold on to a lead or working to tie a game he would be sent out for defensive zone plays. Face offs, blocked shots, and clearing the zone to create scoring chances were a specialty.

“I think I’m trusted as a defensive player but I also want to develop that offensive ability and two way game,” Malone said talking about his role. “I think I’m capable of it and I think I’ve proved it in the past. This year I worked on a lot of skill stuff and did a lot of work with Matt Ellis this summer. He’s been instrumental in helping me better my game.”

It’s a familiar story line season after season in the American League. Former and current players leading a key role in development. Matt Ellis is the director of the Academy of Hockey in Buffalo at Harborcenter. Ellis played in 499 AHL games, 356 NHL games, and started his career with 71 games in the ECHL. He knows a thing or two about what it takes to play professional hockey and also overcome the adversity one can face. Two

“I know we harp on it a lot about having good guys in a locker room but I think it does go a long way. Having guys like Nathan Paetsch around and you know older players like Porter and Redmond and those guys really helped me out in terms of getting back on track,” Malone said.”You know just seeing them day to day and what they do to stay in shape and do the necessary things that keep playing is pretty impressive.”

Malone has worked his way up the lineup this season and looks to keep playing there.

“In years past we’ve sort of put him in more of a checking role, energy line role, and he does have offensive capabilities,” Gord Dineen said talking about Malone. “You’re starting to see him get a little more confidence in that area and his defensive game hasn’t taken a back seat.”

Those offensive capabilities have put Malone on a professional career best five game point streak with three goals and two assists. It all started when Malone started skating on a line with Tage Thompson. The last four games the line has been Malone, Thompson, and Rasmus Asplund.

Tage Thompson perked up when I asked him about playing with Malone saying, “I love playing with him honestly, he’s a work horse. He protects the puck really well in the offensive zone. For me that gives me space just when he holds onto the puck in the corners, tight turns, and uses his body. Gives me time to find a soft pocket.”

“Him protecting and holding on to pucks will turn defenders heads,” Thompson added. “I can get on the backside of them and find a soft spot for a shot and he can find me.”

An example of this was this past Sunday in Springfield. Thompson dropped the puck off to Malone who drew the attention of two players. Malone passed the puck to Asplund to take a shot and Thompson was already on the way to the front and scored on the rebound.

That's getting a bounce (or push in?). Mugsy gets his first goal of the season. Assists to Asplund and Thompson. pic.twitter.com/a3BpGGQaZG

Mugsy Malone scores the 2nd goal for Rochester in the first minute of the 3rd! It's a 3-2 game. pic.twitter.com/hVycGUfbW2

Malone from Fitzgerald and Aplund! Amerks take a 3-2 lead off two goals in 21 seconds. pic.twitter.com/yZSYjkm8iR

“Since he’s turned pro he’s had a lot of health issues and I think based on his attitude he’s really happy to be healthy and able to show his true self,” Gord Dineen said talking about Malone. “The confidence that comes from that has carried over through to his game.”